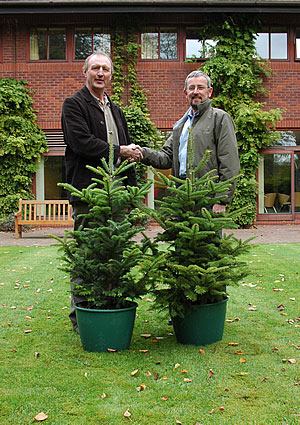 During their visit the BCTGA presented two Christmas trees Abies fraseri to the University. Dr Peter Thomas is pictured receiving them. They are a new addition to the species represented in the arboretum. 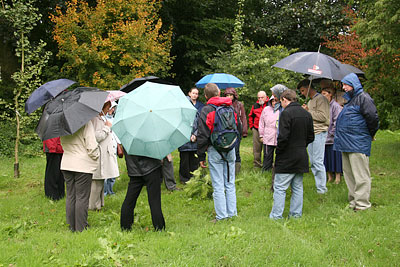 Peter Thomas led a group of 20 on a rather damp lunchtime walk to look at the University's special tree collection. This comprises trees that were moved from the site of the Holly Cross accommodation block and includes such unusual species as Manna Ash, Kentucky Coffee Tree, Gutta-percha Tree, Swamp Cypress, Pride of India and Hybrid Wing-nut. He also gave a lesson in identifying some species of conifer by the smell of their crushed leaves. 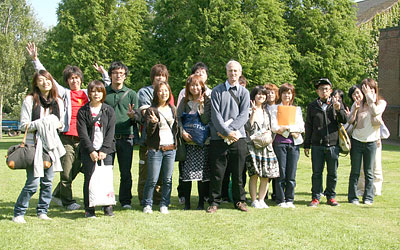 Two parties of Japanese students were taken on a guided walk of the grounds by Dave Emley.

These were undergraduate students from Daito Bunka University (Tokyo) and Otani University (Kyoto) in Japan.

They were here for a 3-week study tour programme. We try to give them a taste of British academia whilst imparting interesting/useful information about Britain and the local area.

Work started on the development of the Home Farm site. Proposals include academic and employment use and student and staff housing against a backdrop of mature woodlands and historic farm buildings. Ecological and sustainable concerns are a key-note of the proposed developments.

Dave Emley led a workshop for the National Women's Register conference on identifying common species of tree. Despite continuous rain all had an enjoyable time. 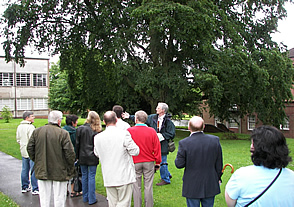 Dave Emley led a group of Canadian and American alumni on a tour of the arboretum . For some it was their first visit after graduating many years ago so much of what they saw was new! Here they are looking at the magnificent Hornbeam.

Dave Emley and Peter Thomas led a group of 40 to look at the Handkerchief Tree that grows in Barnes Dell. All agreed that it looked spectacular in its "jungle-like" environment. The opportunity was also taken to look at the Pagoda Tree, Deciduous Camelia, Ash-leaved Maple and Holm Oak. 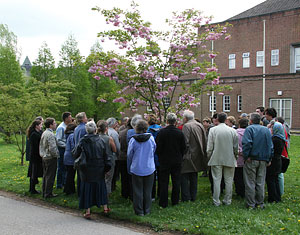 A group of 45 (see photo) gathered for a walk to look at some of the 50 or so varieties of cherries at Keele. These form the nucleus of what is hoped will eventually be a National Collection of Japanese Flowering Cherries. Peter Thomas was on hand to explain the intricacies of Cherry biology and identification.

Around 20 folks assembled outside the Darwin Building for the first Arboretum Walk of the season. After a short walk up to the observatory we were able to look down on the fields of Home Farm where some 20 Lapwings were either sitting or displaying. For many it was their first views of this once common farmland breeding bird. A Buzzard also put in a brief appearance as did an early Bumblebee.

Winds gusting at 70mph lashed the campus on January 18th. There were a number of trees blown over including this Sweet Chestnut along Clockhouse Drive.