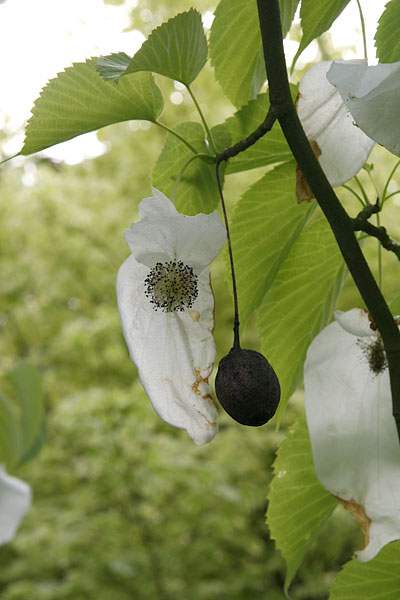 Origins : A native of central China, from Hubei to southern Gansu, south to Guizhou, Sichuan and Yunnan, it was discovered by a Jesuit missionary and keen naturalist Père Armand David (after whom the genus is named) in 1869 but was only introduced to Europe as recently as 1904. It can be found mainly in the larger gardens of the south and west.

Leaves : The leaves are broadly ovate and deeply cordate (indented at the base) and coarsely-toothed - the young leaves are said to smell of blackcurrants.

Flowers : It is best known for its flowers that appear in May and which are globose and purplish and surrounded by large, thin, white paper-like bracts (one larger than the other) resembling a handkerchief. Strictly speaking, when the bracts surround the flower it is known as an involucre - hence the second part of the scientific name.

Fruit : The fruit is a very hard nut about 3 cm long surrounded by a green husk about 4 cm long by 3 cm wide, pendulous on a 10 cm stalk. The nut contains 3-6 seeds. It can be seen in the picture.

Location : There is one tree in Barnes Dell; compartment 12b; square Q14 and another hidden near the M6 compartment 6c; square Q19.