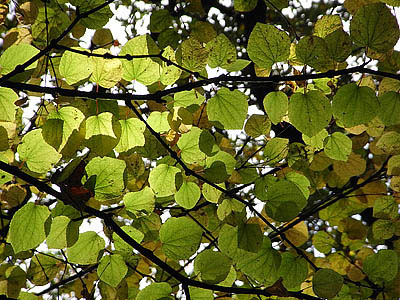 Dave Emley led a group of 25 around the top three lakes. We were lucky to see three Little Grebes on the top lake, making an encouraging return after an absence of several years. The object of the walk was to visit Barne's Dell to look, or rather to smell, the leaves of the Katsura trees that grow there. The leaves have a very high sugar content so that when they start to rot in the autumn, the exude a sweet smell of toffee. We were not disappointed. 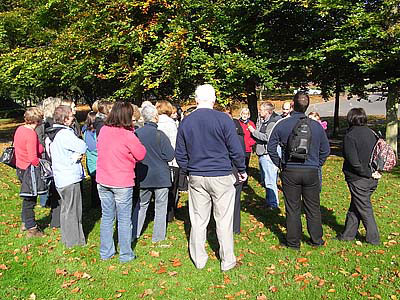 Peter Thomas led a group of 35 on a lunchtime walk to to look at the autumn colours and to explain how and why they are formed.

A new guide to the Campus and Woodland Walks has just been published.

It outlines a walk around the campus buildings and three colour-coded walks around the woodland below Keele Hall.

In addition there are virtual versions of the walk that you can enjoy from your desk! 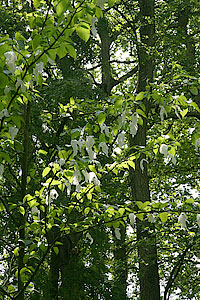 Dave Emley led a party of 25 to look at the Handkerchief Tree which was in flower in Barnes Dell. The opportunity was taken to go and look at fish on Lake 5 that were basking close to the surface. They included some quite large Carp and a large shoal of Rudd.

Large numbers of Dragonflies and Damselflies were in evidence over the lakes too. 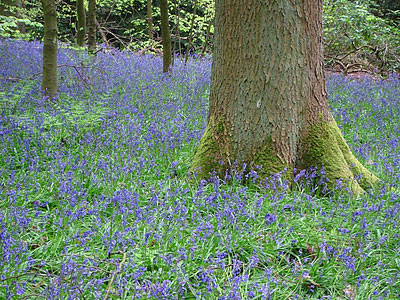 Dave Emley led a party of 20 to look at the Bluebells in Springpool Wood. They were at their best. 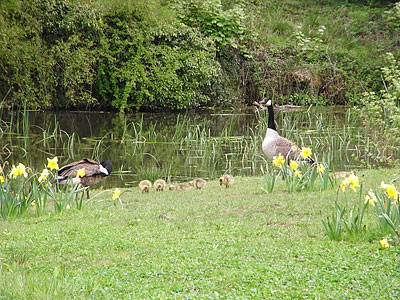 The pair of Canada Geese that nested on the island have produced 7 goslings! 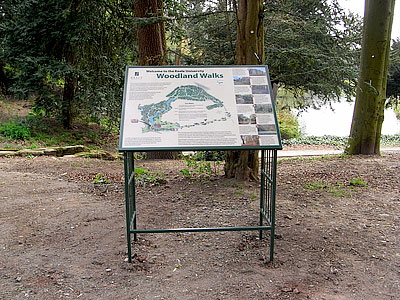 The Woodland Walks map has now been installed below the Keele Hall wall, at the head of the top lake. It shows three colour-coded circular walks, each of which is outlined with coloured marker posts. A Guided Walk leaflet is being prepared to go with it.

Thanks are due to Andy Lawrence of KUDIS for the artwork. 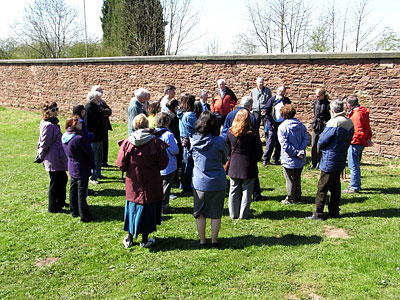 Peter Thomas and Graham Lees led a group of 25 to look at part of the University's Japanese Flowering Cherry collection. With over 140 varieties it is one of the largest collections in the country. 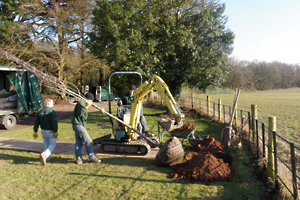 Five ornamental Rowans were planted at the bottom of Keele Hall lawn. They were a donation from Philip Davies.  He and his wife met at Keele, he was doing American Studies and she Russian.

He wanted trees that would span the two continents. Rowan was chosen as it grows right through Russia and is also a common, introduced ornamental tree in N. America (and indeed is naturalised in parts and spreading through the native woodland).  Moreover it is very similar to the American mountain ash Sorbus americana - which doesn't grow wonderfully in the UK - and an American and a Russian looking at a rowan would both immediately feel at home with it.  The five will form a varied and very attractive addition to the the campus."

Dave Emley led 25 folks on a short walk around campus as part of Keele Green Week. They looked at identifying common trees in winter.