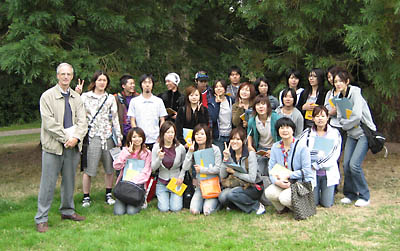 Two parties of Japanese students were taken on a guided walk of the grounds by Dave Emley. These were undergraduate students from Daito Bunka University (Tokyo) and Otani University (Kyoto) in Japan. They were here for a 3-week study tour programme. We try to give them a taste of British academia whilst imparting interesting/useful information about Britain and the local area. Whilst they enjoyed the trees I have to say that it was Keele Hall and the Clock House that they liked best!

A party of 15, led by Dave Emley, took advantage of the super weather to look for butterflies on the buddleias around Lindsay and the Walled Garden. There were excellent numbers - the best for many years. They included :

The number of House Martins nesting on University buildings is the best since the 1990s with a total of 19 pairs. 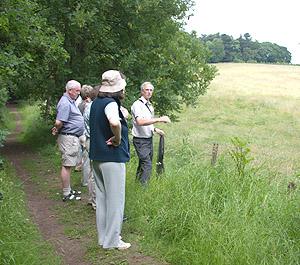 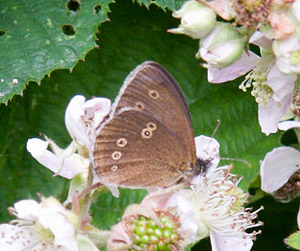 The party wandered down to Lake 5 to see the Ringlet butterfly. About 6/7 were seen which is great considering that they only appeared at Keele two years ago.

We also looked at the Caucasian Wing-nut tree growing by the dam between lakes 4 and 5 and the Fringed Waterlily growing on Lake 4. 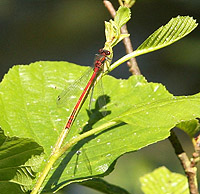 Thirty sun-kissed soles  joined a lunchtime walk led by Dave Emley. A brief stop by the top lake was made to view its rather depressing state but, as was pointed out, it was a marvellous illustration of how, if left unchecked, a lake could slowly develop into a piece of woodland!

The object of the walk was to view the dragonflies and damselflies on the third lake. We were lucky to see four species which gave good and entertaining views. They included Blue-tailed, Azure, Common Blue and Large Red Damselflies. Unfortunately we only had a very brief view of a dragonfly as it flew over head! 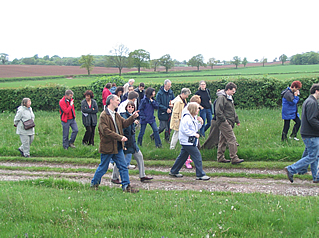 With one eye on the weather, a group of 30 assembled on the Terrace for a walk along Clockhouse Drive, led by Dave Emley and Peter Thomas, to look at some spring flora and fauna. PT enlightened us as to why some Sweet Chestnuts had burrs on their trunks and others didn't and also why the lower leaves of the Holly were prickly while the upper leaves were not! Among the spring flowers we found Bluebells, Tormentil, Bugle, Red Campion, Pignut, Ribwort Plantain, Cocksfoot and Sweet Vernal grasses, Good Friday Grass (not a grass but a woodrush) and Lady's Smock. The eggs of the Orange-tip butterfly were found on the latter.

A group of 40 assembled outside Darwin Building on a glorious spring day for a short walk to the observatory. The object of today's walk was to look at the Lapwings that breed by Home Farm. We were not disappointed as there were at least five pairs, some of which gave good views through the telescope. A small flock of Swallows and a few House Martins entertained us too. Other birds included Pied Wagtail, Wood Pigeon, Stock Dove and the ubiquitous Crow and Magpie.