Dave Emley led a group of 20 folks on a walk for Dignity and Well-being week. The route went along Clock House Drive and followed Lymes Road to Keele Village and back to the campus. There was not a lot of activity but we did see a Buzzard searching for worms in a field and a Grey Shoulder-knot moth on an Ash trunk. 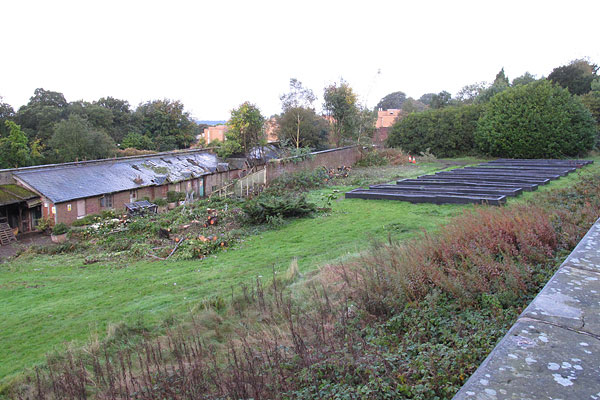 The allotment beds are now in place in the Walled Garden and work has begun on removing vegetation to reveal the old lean-to greenhouses and the assorted sheds. 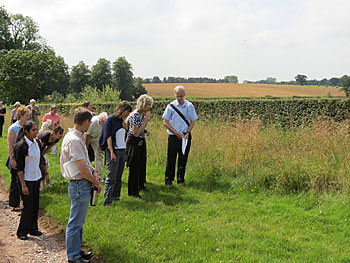 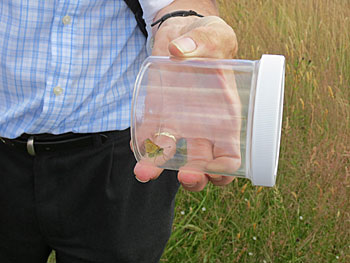 Dave Emley led a group of 20 along Clock House Drive to look at some of the grassland flora and its associated butterflies.

We were blessed with good weather and our butterflies included Small Skipper and Meadow Brown plus two moths - Silver Y and Shaded Broad-bar. 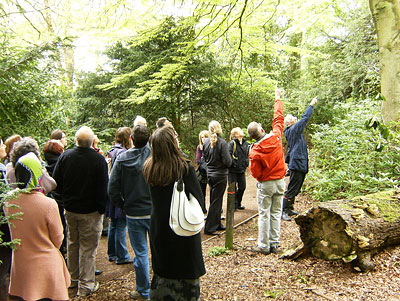 After a wet start it cleared in time for the lunchtime arboretum walk. 30 folks assembled for a walk to see the Handkerchief Tree and the Bluebells.

En-route we passed the Canada Geese and their 4 goslings and saw a pair of Little Grebes on the lake. Unfortunately the Handkerchief Tree was not yet in flower; a combination of the poor weather and its sheltered position I think.

The Bluebells were looking good but were showing signs of going over.

Thanks to Kendal Allen for the photo of Peter and Dave pointing out the Fern-leaved Beech. 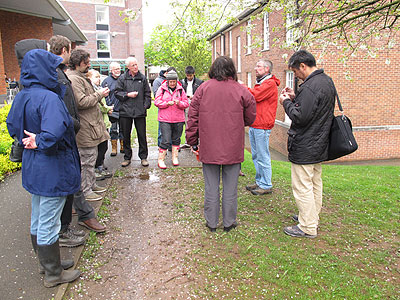 About a dozen folks turned up for the annual cherry walk led by Dave Emley, Peter Thomas and Graham Lees. We looked first at our native cherry and PT explained how we can tell a cherry from an Almond or a Peach - both of which are in the same family as cherries - the Rose family or rosaceae.

We then moved on to some of our more mature cherries including Tai-Haku and Takasago. GJL explained how the rather quaint names, derived form Japanese, could give an indication of the appearance of the flower of the tree.

We finished by the peculiar cherry outside Lennard-Jones that had half white and half pink flowers. PT explained that all cherries are grafted on to a rootstock of our wild cherry. In this case, the rootstock itself had grown and flowered - the white flowers - while the pink flowers belonged to Kanzan which was the tree grafted onto the rootstock!

While many of the trees are still young, the collection builds upon the long history of cherries on the campus using the expertise of Chris Sanders, a noted plantsman and members of the University Arboretum Committee.  It has been partly funded by Plant Heritage but primarily by generous donations of alumni in memory of John Ivinson, and by Philip Davies and his family.

As well as making the campus visually stunning in the spring, the collection is primarily of scientific use, acting as a reserve for unusual and little know varieties.  Material has been supplied to national nurseries, The Royal Botanic Gardens, Kew and the Natural History Museum, London, while our web site attracts attention from around the world.

Further information on the collection, including flowering times and location of individuals can be found here. 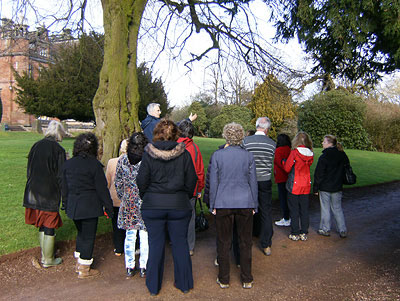 First lunchtime walk of the year was blessed with sunshine. Dave Emley led a group of 14 along the Terrace and down to the lakes. Plenty of birds were in songincluding Nuthatch, Chaffinch, Goldfinch, Coal Tit, Robin and Wren. Mallards on the top lake were getting very amorous too! We passed by Union Square on the way back to see how work was progressing. 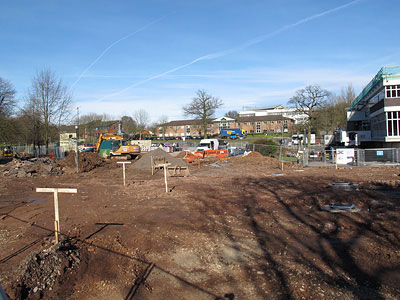 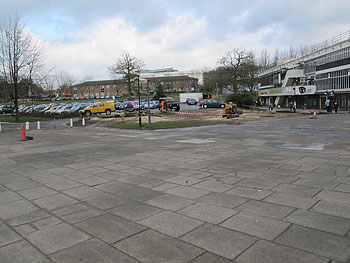 Felling of trees started in Union Square continues in advance of work starting on the reconstruction project.

Follow this link for more images of the proposed design. 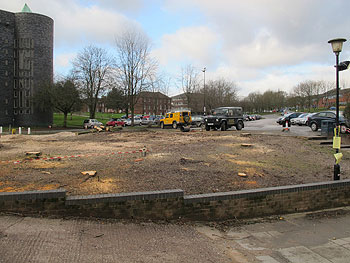