Work on the dam finished a week ago and the lake has begun to fill with water. Heavy rains a few days ago has meant that water will start to flow over the dam very soon. Work has started on restoring the footpaths.

Work by Wrekin Construction to renovate the White Well, as part of the the Lakes and Valley project, has been completed. The White Well, near Keele Hall, which is served by a natural spring, is estimated to be some two or three hundred years old and is of  stone construction with a hip roof.

The structural roof timbers required repair and the original tiles were replaced. The well was leaking so a new outlet into the lake was installed and the railings have been painted.

Work on the top lake nears completion. The lake bed has been scraped level and the dam is being repaired. The island is now exposed and so is the small glacial boulder which can be seen to the right below. According to legend it is called the "Otter Stone" but whether one actually sat on it is debatable!. According to geologists it is composed of dolerite and would have been deposited here as the ice retreated. 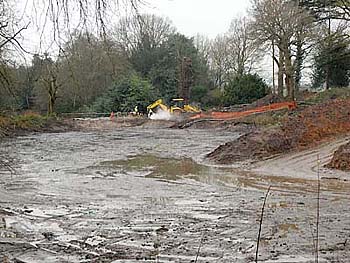 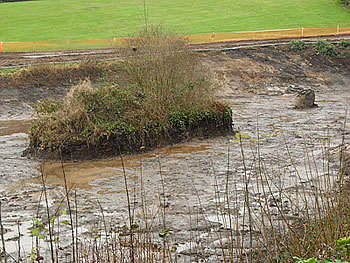 Dave Emley led a group of 15 to look at the autumn colours and to visit the top lake where work is well underway to drain it and remove the silt before building a new dam. 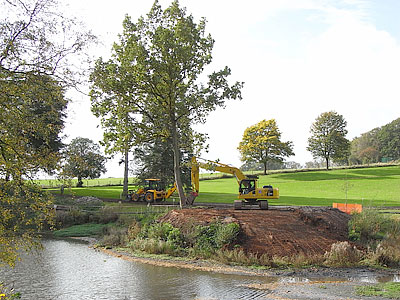 Wrekin Construction has now commenced draining the top lake as part of the work for the Lakes and Valley project. The objective is to dredge, clean and restore the top lake by Keele Hall and to repair the weir so that sufficient water is held to maintain the integrity of the lake. This work is fundamental to the improvement of the drainage as well as the ornamental function of the lake system. Testing of the ground around the weir has also begun to identify appropriate improvements. The work means that the path from Keele Hall to the bottom of the lakes has been closed temporarily to pedestrians. The work can be observed from the east bank of the top lake.

As part of the project the former boathouse, currently consisting only of a brick foundation, will be rebuilt, with financial support from The Friends of Keele. The White Well has been drained and is also being restored, with the Minton tiles visible for the first time in decades. At the same time the outlet of the spring will be repaired to make it fully functional again.  Wrekin Construction is restoring the White Well as a sponsorship project.

Future enhancement projects may be supported by alumni donations to the Keele Key Fund Heritage and Environment.

A Chinese Tulip Tree was donated and planted, outside Lindsay S-Block, by the family and friends of ex-student Thomas Suharlan (1996-1999) who passed away following a road traffic accident in Jakarta. See photograph.

Dave Emley led two groups of children attending the Keele Children's Summer Club. They looked at ageing trees by measuring their girth, finding out how high they are, drawing leaves, rubbing bark and generally having a fun time!

Dave Emley led a lunchtime walk around the campus for delegates to the ECPR Summer School on Environmental Politics and Policy.

Rachel Robertson planted a Weymouth Pine Pinus strobus, on behalf of the family, on the far side of the top lake in memory of Professor Alexander Provaen Robertson (1925 - 1995) Professor of Mathematics 1965 - 1973. See photograph.

Dave Emley led a party of ten along Clock House Drive and part of Lymes Road to look at some late spring / early summer flowers and grasses. 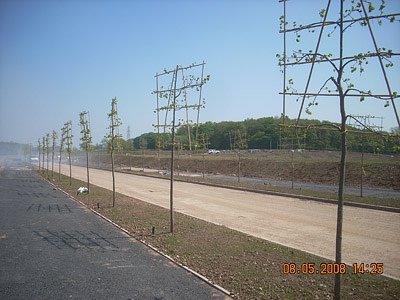 63 pleached Small-leaved Limes Tilia cordata, purchased from Specimen Trees in Cheshire, have been planted along the access road to the new Home Farm development. 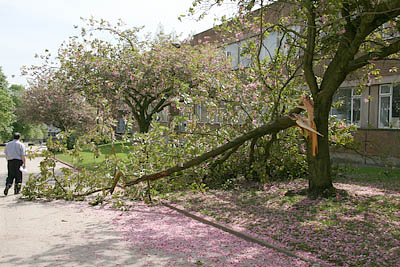 A mature Flowering Cherry Prunus 'Kanzan' outside William Smith Building was severely damaged by a reversing lorry. It has had to be felled. 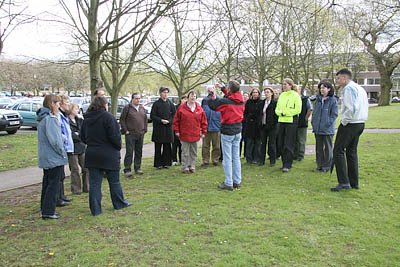 Peter Thomas led a group of 20 to look at the Flowering Cherries which were at their best. The University has some 120 varieties in all - some very rare in cultivation in the UK.

Margaret Bird donated a Foxglove Tree Paulownia tomentosa and planted it by the side of the Library on the occasion of her retirement. See photo. 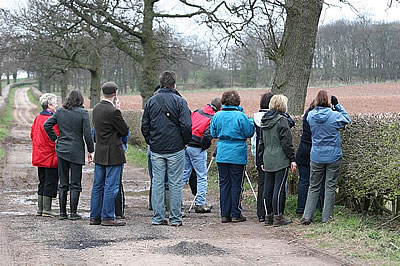 Dave Emley led a group of 20 to see the Golden Plovers and Lapwings gathered in fields along Lymes Road. There were several hundred well-hidden Golden Plovers and about 8 pairs of Lapwings - some performing their erratic display flight. In addition we saw a Curlew and a Snipe.

A Cypress Cedar Cedrus brevifolia was planted at the side of Keele Hall in memory of Nick Cartlidge, a former member of support staff in Life Sciences, by Jose, Tim, Eleanor and Ben Cartlidge. See pictures.

Following on from the work done by the Heritage Lakes and Valleys Project alluded to below, the Arboretum group have been awarded a grant from The Keele Key Fund to increase accessibility to the arboretum. This will involve setting up three colour-coded circular walks of increasing length, reaching down to the motorway. In addition a large scale map of the walks will be installed by the side of Keele Hall. As many of our tags have come off the trees and, as they give little information about the trees they are fixed to unless you log on to the website, we intend to put more permanent labels on trees of particular note. These will include the name, country of origin, date planted etc. To go with all this will be a new guided walk leaflet.

An Atlantic Cedar Cedrus atlantica, was planted by friends in memory of Rachel Parker alongside Lake 1. See photograph. 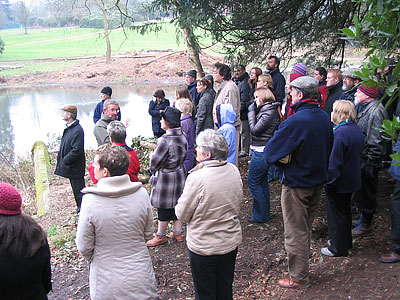 Peter Thomas led a walk to the top lake to explain the major landscaping work that is being carried out in that area.

He assured the 40 attendees that whilst it looked a "mess" at the moment, it will have great benefits in the long term and will greatly enhance the landscape below the Hall. 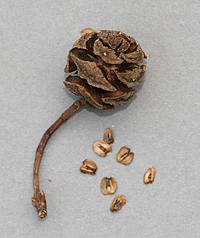 A seemingly unremarkable statement, but this is the first year it has happened at Keele and it would appear to be a uncommon event in the UK. May be it's a sign of global warming - who knows!

Work began in week beginning 11th February on planting a further 80 varieties of Flowering Cherry, bringing our total collection to around 120 varieties. Funding for these trees was aided by Keele Alumni in memory of John Ivinson - a former student. 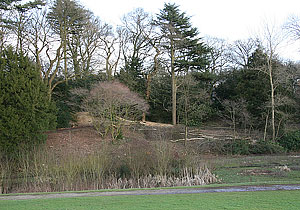 Following a comprehensive tree survey last year, major arboricultural work is underway. This includes removal of dangerous trees,the thinning of others and the removal of scrub. Although the results may look devastating at first, these are normal forestry practices and will eventually improve the health of our tree stock.

In particular, much removal of scrub and thinning of invasive trees such as Birch has been carried out on the far side of the top lake. This will hopefully result in an improved ground flora and make room for the planting of other trees.