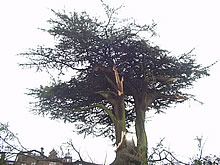 The snowfall of Boxing Day 2004 caused major damage to the Cedar of Lebanon that stands by Keele Hall. Tree surgeons have been called in to make good the damage.

Launch of the Arboretum Trail Leaflet

The Vice Chancellor, Professor Finch, planted a Monkey-puzzle tree on Tuesday 26th October 2004 to launch the Arboretum Trail leaflet (see photographs). The leaflet was then officially launched at a meeting in the exhibition suite of the Chancellor's Building on 1st November. This was followed by a short walk to look at the autumn colours.

About 40 people attended a lunchtime walk taking in the top three lakes and led by Dave Emley. The group were shown a variety of wild flowers and trees including White Mulberry, Japanese Pagoda Tree, Evergreen Oak, Tree of Heaven, Hornbeam and Ash-leaved Maple. A Brown Hawker dragonfly patrolled the lake while Gatekeeper and Large White butterflies fed on thistles. Several members took advantage of the wild raspberries too.

It is rare to add a new butterfly to the list but a Ringlet, a rare species in Saffordshire, was found in July. Further details are available.

A small party of volunteers cleared the path between the 4th and 5th lakes on Sunday 23rd May to enable visitors to view the Caucasian Wingnut tree which is growing well at the foot of the dam.

Work started on 10th May on re-grading the footpath that runs along the far side of the top three lakes as far as Barnes Dell. This will make a useful circular walk and also make a few more interesting trees accessible.

A good crowd of 40 tree enthusiasts gathered on Tuesday 23rd March for the first of the year's series of lunchtime walks. Today's walk was led by Peter Thomas who showed us how to identify some common trees from their buds and bark.