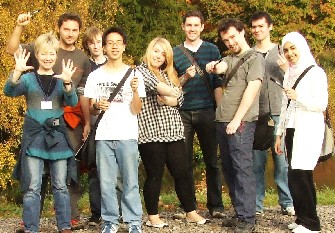 VE @ Keele volunteers took part in a project with Dave Emley and Keele Estates this week to help create a more user-friendly environment in Keele Woods. Many of the new wayfinder marker posts put into place along the pathways have been colour-coded to improve access to the walks around the lakes and woodlands and the volunteers spent Wednesday afternoon painting the upper section of each marker post around the top three lakes. 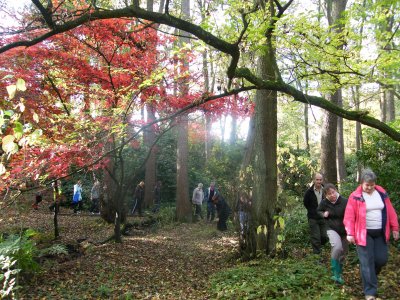 Amid glorious autumn sunshine Dave Emley led a party of 40 (phew!) around the top three lakes via Barnes Dell to look at the autumn colours. The Beeches and Japanese Maples were looking particularly splendid. DE pointed out the Coot that had returned to the top lake after an absence of over 10 years. He also pointed out the Medlar tree that had produced fruit for the first time. 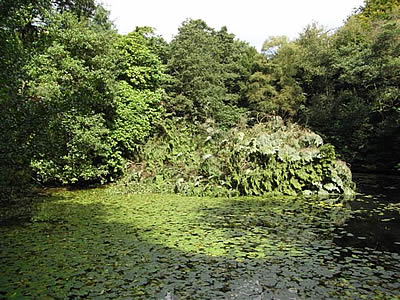 The Eastern Hemlock that was a major feature on the small "island" on Lake 3 came down in squally winds last week. It will make quite an impact on the view, which was one of the most pleasant within the grounds.

Dave Emley led 12 people on a a very short walk to look at the moth trap that he has been operating in the Walled Garden and to have a look for butterflies on the wild flowers that are growing there. Amongst the moths were species such as Marbled Beauty, Small Fan-footed Wave, Large Yellow Underwing and the Snout. Butterflies included Small, Large and Green-veined Whites, Gatekeeper and Meadow Brown. 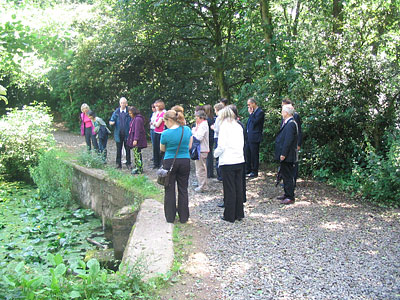 We started off in sunshine but ended like drowned rats! Such is the English weather. A group of 20 had a leisurely walk along the newly-refurbished paths below Keele hall to the bottom lake. We had good views of Yellow and Fringed Waterlilies, Caucasian Wing-nut Tree, a Buzzard and some lovely Carp and Rudd swimming in the pools. 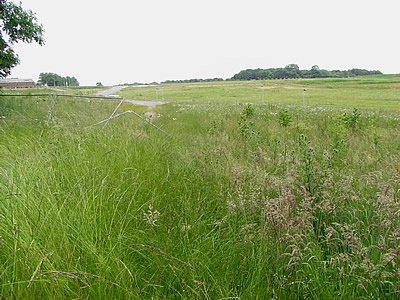 Dave Emley led a group of 10 around the Phase 3 site which was covered in wild flowers. We saw a few Meadow Brown butterflies; heard a Goldcrest in the adjacent conifers and watched a Kestrel catching its lunch.

Work on the reinstating the footpaths below Keele hall has now finished, making it possible to do a circumnavigation of the top three lakes without getting your feet wet. More importantly, the paths are accessible by wheelchair too. 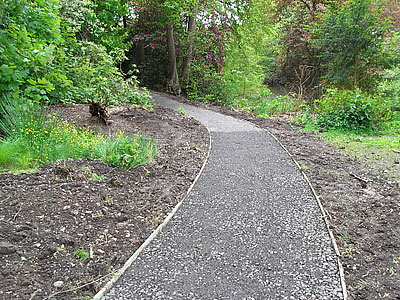 Work continues apace on constructing an all-weather path through the woodland as far as Lake 5. Here we see the path by the side of the dam, looking south.

Work is to start shortly on resurfacing the footpaths below Keele Hall and installing the colour-coded way-marking posts. It is intended to have an all-weather surface around the top three lakes and extending down as far as lake 5. 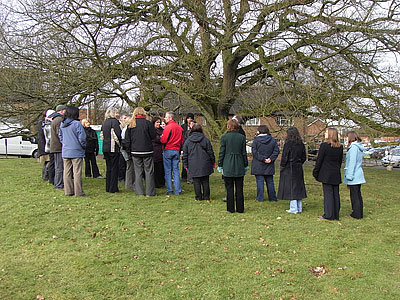 Dave Emley and Peter Thomas led some 30 folks on a walk around the Arboretum as part of Go Green Week. Peter is seen here discussing the age of one of our magnificent oaks.

The opportunity was taken to explain some of the landscaping that was planned for the central campus and how this would affect the trees. People were assured that while a number of trees would be felled, many more were going to be planted and that they would be more interesting species that would enhance our collection. 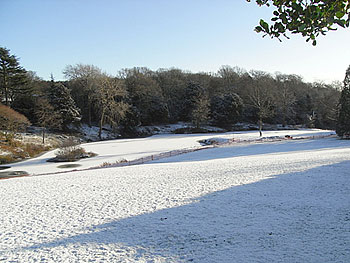 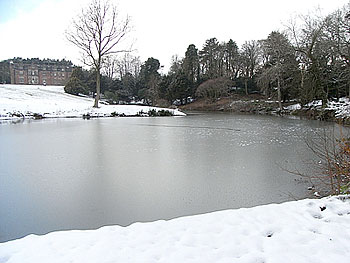 The top lake has filled up over the Christmas and New Year period.

Work has started on reinstating the path through the woodland as far as Lake 5.

It is intended, over the coming year, to designate three circular walks using colour-coded marker posts and produce a self-guided leaflet to go with them.