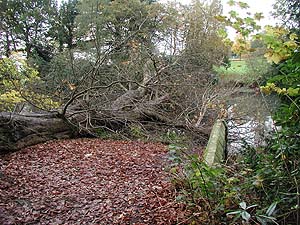 The large Horse-chestnut that stood by the old boathouse has finally fallen into the lake (November 2005). It had been leaning for many years but a combination of soggy ground and the possibility of being struck by a large branch from a neighbouring Beech which fell off, may have been to blame.

A group of 30 met on October 26th to look at Trees in Autumn, led by Peter Thomas. 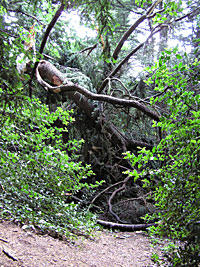 One of the mature Deodar Cedars on the east side of the top lake collapsed in August, blocking th footpath and causing damage to adjacent trees. It is unclear why it collapsed. However, a wonderful scent of cedar wood from the sawn timber pervaded the air!

Thanks to Pete Greatbatch for the photo.

A group of 40 attended a lunchtime walk on 4th August 2005 led by Dave Emley and Peter Thomas. This time we visited the Terrace and the Walled Garden below it to look at common "weeds" and butterflies. We started with a look at Thale Cress - an important species in genetic research before passing a few common lawn weeds. The Walled Garden held a variety of thistles, willowherbs, ferns and the Buddleia or Butterfly Bush. Despite a bad year for butterflies we managed to find Comma, Small Tortoiseshell, Red Admiral, Peacock, Meadow Brown, Gatekeeper, Green-veined White and Large White. The highlight for many was seeing a Broad-leaved Helleborine; one of the few orchids to be found at Keele.

Thanks to Pete Greatbach for the photo.

A group of 40 attended a lunchtime walk in glorious sunshine, led by Dave Emley. We took in the top 5 lakes, looking at flowers, insects and fish! Of the dragonflies, Brown Hawker and Broad-bodied Chaser were in evidence while butterflies included Meadow Brown and Gatekeeper. For many the highlight was the shoals of fish, including some large Carp, on lake 5. A good variety of flowers was seen including Creeping Thistle, Reed Mace, Greater Bird's-foot Trefoil, Raspberry, Hedge Woundwort, Herb Bennet, Greater Bindweed, Pendulous Sedge, Yellow Water-lily and Enchanter's Nightshade. 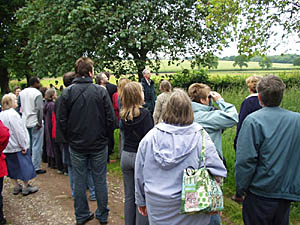 A group of 40 attended a lunchtime walk on June 16th 2005, led by Dave Emley and Andy Lawrence. The object was to look for Yellow Wagtails along Lymes road. However, they proved elusive but en-route we looked at a variety of wild flowers and grasses growing along Clockhouse Drive.

Thanks to Mark Thomas for the photo. 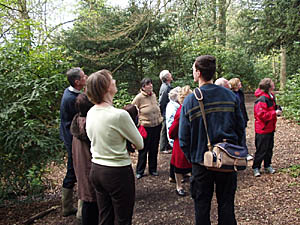 A group of 40 attended a lunchtime walk on April 22nd 2005 led by Dave Emley and Andy Lawrence. The route of the last walk was repeated to see what new species had arrived and which ones were now in song. In all 25 species were either seen or heard, including Blackcap, Chiffchaff and Raven.

Thanks to Mark Thomas for the photo.

A group of 30 attended a lunchtime walk on March 9th 2005 led by Dave Emley, Andy Lawrence and Nick Pomiankowski. A total of 18 species was seen or heard.

25 hardy souls braved the cold on Wednesday 2nd March 2005 for the second Arboretum walk of the year. Peter Thomas explained how to identify some of our common trees by examining their buds, bark and overall shape.

Around 40 staff attended a lunchtime bird walk on January 14th 2005 led by Dave Emley with help from Andy Lawrence and Nick Pomiankowski. The weather was kind to us and we had good views of 2 Ravens and a Carrion Crow mobbing a Buzzard. There were distant views of a flock of Lapwings too.