Three fruit trees, Apple, Damson and Medlar, have been planted in the Memorial Garden in memory of former students. These are the first such plantings and they join the Flowering Cherries of our National Collection. 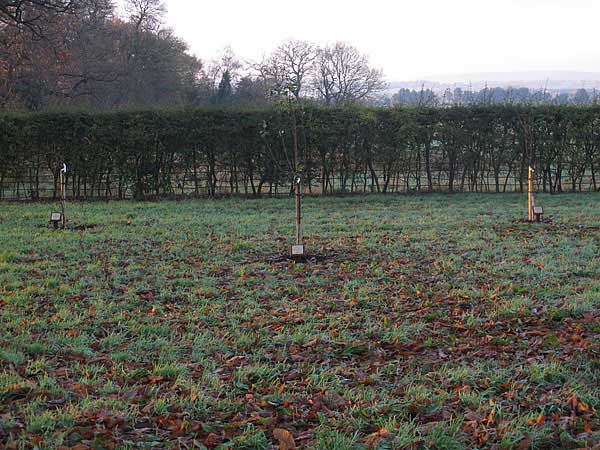 John Easom, of the Alumni Office writes "We have found a perfect new spot for our memorial garden and one that won't be disturbed by future building. Imagine walking 50 yards from the Clock House down Chestnut Drive to a field on the right which has been enclosed. This area will grow saplings for the National Cherry Tree Collection at Keele and also has a large area for memorial trees with great views down Chestnut Drive.

We are choosing mostly fruit tree species that will be observed actively by Life Sciences' students and researchers and the fruit will be harvested for food. We think this is a perfect Keele mix of memory, education and... nourishment" 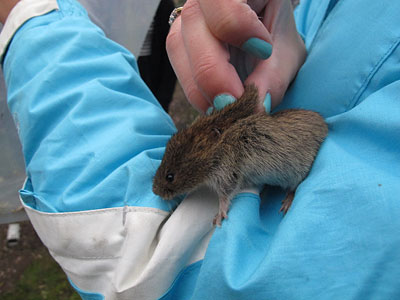 Using bat detectors, pipistrelle and noctule bats were recorded, mainly around the walled garden, possibly due to the moth trap providing a good feeding ground!

In the morning check of small mammal traps, a good total of 3 bank voles and 7 field voles were caught and safely released.

Two plant scientists from the Forest and Forestry Products Research Institute, Tama Forest Science Garden,Japan, Dr Hiroshi Yoshimaru (geneticist) and Dr Toshio Katsuki (taxonomist) visited Keele to examine our collection of flowering cherries. They spent the afternoon with Chris Sanders, our cherry consultant, Peter Thomas and Graham Lees discussing ways in which the collection may be of use and looking at some of the cherries in the collection.

Drs Yoshimaru and Katsuki are in the UK to visit various arboreta and nurseries with large tree collections including the Royal Edinburgh Botanic Garden and Kew. Their remit is much wider than just cherries but their reason for visiting Keele was to see the collection and find out what we have. With flowering cherries playing such an iconic and important part in Japanese culture and life, they are trying to rationalise the naming of flowering cherry cultivars across the world based on morphological characteristics and DNA fingerprints. Apparently many cultivars were lost during the political upheavals in Japan in the late c.19 but may survive in the West. Also many cultivars in the West may have been misnamed during their initial export from Japan and subsequently in their commercial life over here. Thus some cultivars may not now be the same as those of the same name in Japan. Once the bureaucracy has sorted out, it is hoped that leaf and flower material from specific cultivars of interest can be sent to Japan for analysis and that eventually many of the confusions which currently exist will be ironed out. 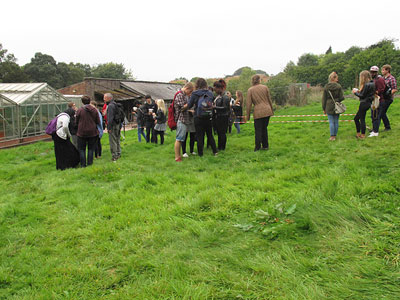 In the Walled Garden they examined pitfall traps and DWE explained how we survey moths using a variety of techniques including a moth trap. He showed them a selection of species caught the previous night. 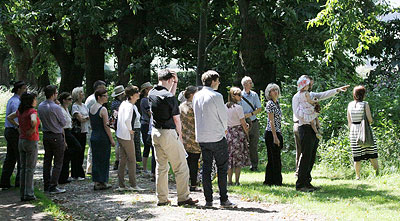 Dave Emley led 25 folks on a butterfly walk along Clock House Drive. The sun shone and we were rewarded with sightings of Small Skipper, Meadow Brown, Gatekeeper, Small Tortoiseshell, Large White, Speckled Wood as well as the Shaded Broad-bar moth. 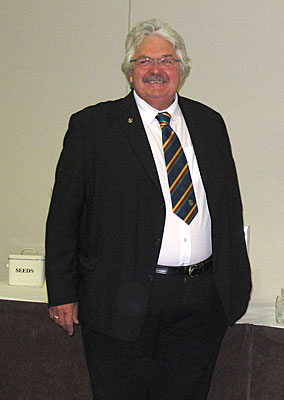 Over that time John has done a tremendous amount to look after the estate and particularly he has been key in facilitating the setting up the arboretum and the National Collection of Flowering Cherries.

We all wish him well in his retirement. As he is remaining on campus I'm sure we will see him from time to time - I hope so.

Dave Emley led a group of 10 to look at the Bluebells in Upper Springpool Wood and the Handkerchief Tree in Barnes Dell. We were lucky to see a Whitethroat singing behind the Students' Union car-park and to hear a Cuckoo calling in the wood. 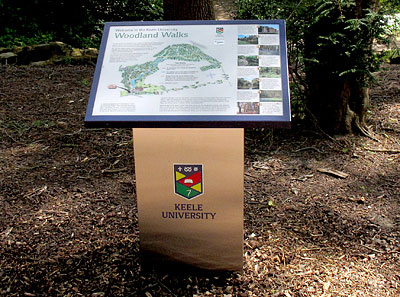 The new woodland walks map, to replace the one destroyed in the gales, has today been put in place.

It is excellent and thanks are due to Estates for sorting this out.

Our National Collection of Flowering Cherries was officially opened by Prof. Philip Davies (ex Keele) and Prof. Bat Bailey (Pro VC for Environment and Sustainability. Over 70 visitors were present; many from the National Trust and Plant Heritage. A short walk followed the opening ceremony when Peter Thomas and Graham Lees gave us the low down on Cherries. 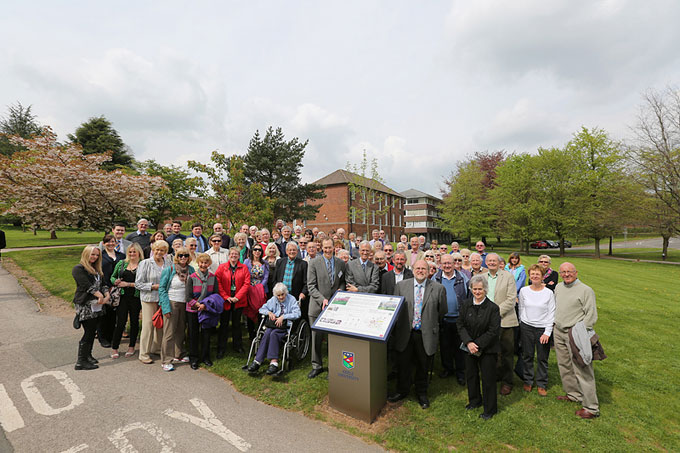 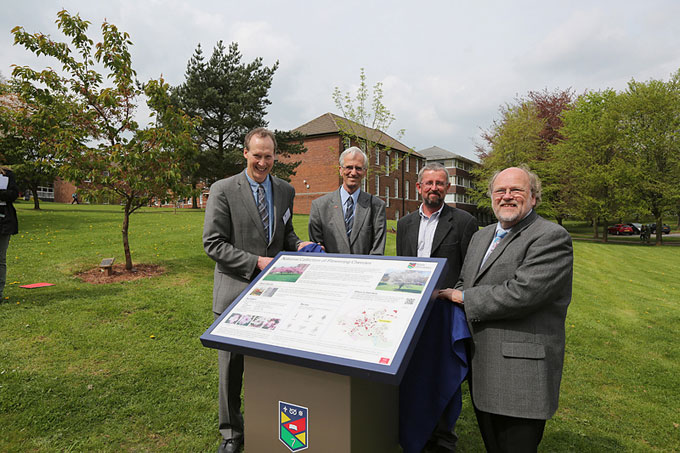 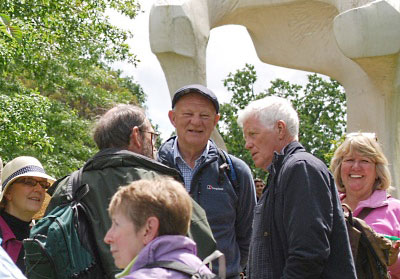 Chris Sanders, the Keele Arboretum Group’s chief advisor on flowering cherries and other woody plants has been awarded the Royal Horticultural Society’s highest accolade, the Victorian Medal of Honour.

The VMH is awarded to British horticulturalist residents in the United Kingdom whom the RHS Council considers deserving of special honour by the Society, which may include the most eminent horticulturists and those who have given special service to the Society. It was established in 1897 and can only be held by 63 recipients at any one time, one for each year of Queen Victoria’s reign, so is not awarded every year.

A short biography of Chris can be found here.

Dave Emley and Graham Lees led a group of 12 around the cherry collection some of which were looking superb. 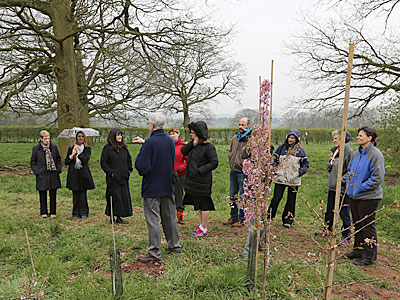 Dave Emley led a group to look at the new Memorial Garden area.

He explained our plans for the future and said a little about Flowering Cherries in general and the importance of our collection - many of the specimens not being available elsewhere outside Japan. 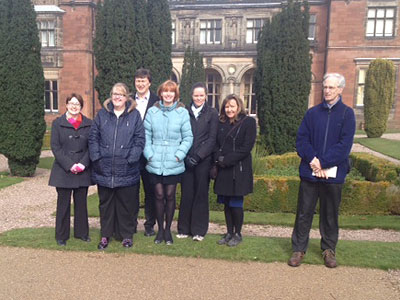 Dave Emley led a group from Research and Enterprise Services' Green Impact team on a walk around the top three lakes.

Dave Emley led five members of the Language Learning Unit on a lunchtime walk around the top 3 lakes as part of their Green Impact submission.

Dave Emley led nine hardy souls on a lunchtime walk as part of Green Week. The woodland paths were closed because of tree work following the gales so we looked at identifying trees from twigs and bark around the campus buildings.

Following an introduction from the Dean, Pat Bailey, Dave Emley gave a short presentation at the launch of his book "Natural History of Keele University" as part of Keele Green Week. This was followed by a presentation by Dr Peter Thomas on the history of the estate and its importance in the future for teaching. 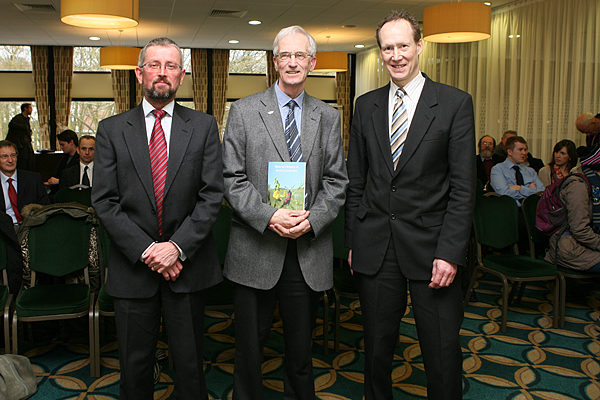 The book is a synthesis of 40 years' of accumulated data on the flora and fauna of the University's estate. The environment at Keele is becoming increasingly important: it is an attractive environment for staff and students to live and work in; it is also an attractive place for visitors too. It can also have a bearing on students' choices when deciding where to study. Any current and future management of the estate needs baseline data on the flora and fauna when deciding management policy and it is hoped that this work will help with that. Also, more and more use is being made of the campus itself as a teaching resource and it is hoped that this book will be a useful study aid. More information here.

Severe gales brought down a beech tree on top of the Woodland Walk sign by the side of Keele Hall! 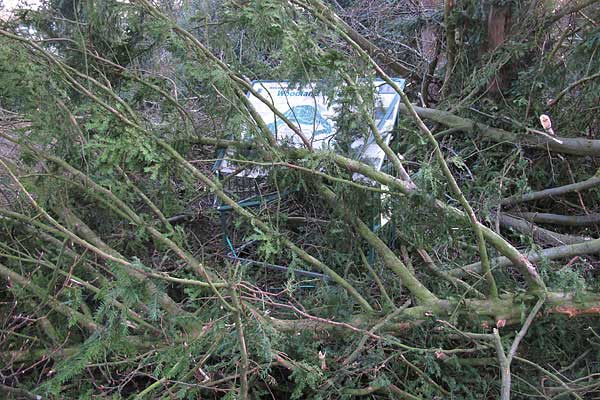 Dave Emley led a small group from Law on a lunchtime walk. It was part of the Green Impact scheme in which an arboretum walk counts towards their bronze award! We walked around the top 3 lakes but it was very cold and we saw almost nothing but heard Buzzard and Nuthatch. All enjoyed being out.

The large Crack Willow that was planted on the island in Lake 1 about 15 years ago has been replaced with a more sensible Weeping Willow. This should provide nesting cover for the ducks etc.

Dave Emley led a small group from Finance on a lunchtime walk. It was part of the Green Impact scheme in which an arboretum walk counts towards their bronze award! We walked around Phase 3 but it was very cold and we saw almost nothing; but enjoyed being out. 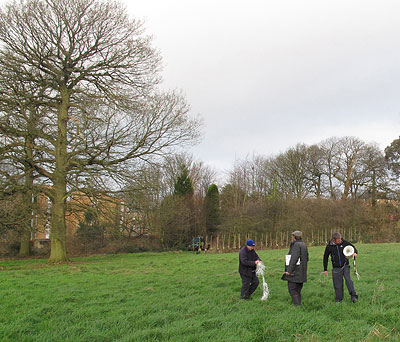 An area of land just beyond the Walled Garden has be set aside as a memorial garden. The idea is to plant some of the Flowering Cherries that form part of the National Collection that we hold but also to provide space for trees that others may wish to donate or  plant in memory of someone.

Work has started on laying out paths after which we will be planting out some of the cherries that are currently in temporary position on the site. We intend to place seating here so that staff, students and visitors alike can have a peaceful place to sit and relax.