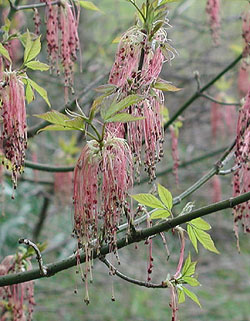 Origin: This is a native of North America and is sometimes referred to as Box Elder. Introduced in the 1680s, it used to be a source of sugar and maple syrup in the past but today it is a commonly planted tree in parks and gardens; usually as a variegated form. 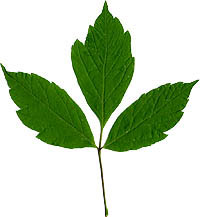 Leaf: the name derives from the similarity of its leaves to those of the Ash Fraxinus and one would be forgiven for not recognising the tree as a maple at all!

Flowers: male and female flowers are found on different trees. The long bunches of reddish male flowers, illustrated opposite, are perhaps the most attractive part of the tree.

Uses: in its native area it is considered to be an undesirable species as the wood is brittle and and weak and it harbours an insect called the Box Elder Bug which, while not dangerous, can be a nuisance when it overwinters in houses.