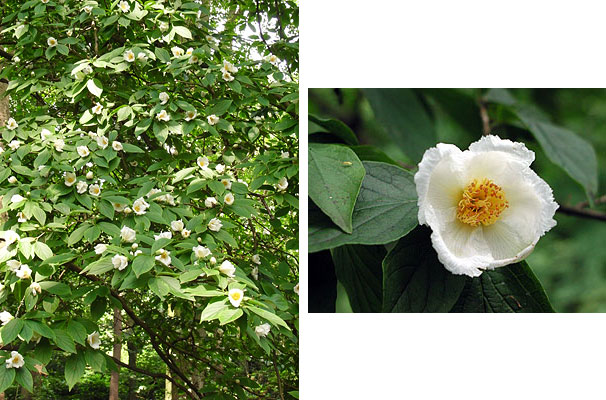 Origin: Introduced from Japan in 1874, it is an infrequently met with tree in larger gardens, usually in the south of the country. The genus is named after John Stuart, the Earl of Bute, who was a patron of botany in the eighteenth century.

Tree: it is usually a slender tree with an open crown. The bark is variegated orange-brown with brighter orange patches where purple-grey patches have fallen off - very like that of a Eucalyptus. 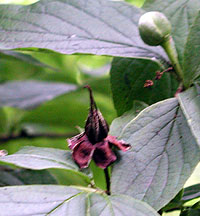 The leaves are dark green, dull above and shiny beneath - an unusual feature. In the autumn they turn bright yellow.

Flowers: the white flowers with orange-yellow anthers, which are 5 - 6 cm across, appear in late June to July from erect buds enclosed by two large bracts (see photo). The photo also shows the reddish-purple fruit surrounded by five reddish sepals.

Location : One tree by the side of the path in Barnes Dell; square P14; compartment 12a.