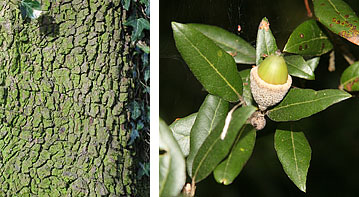 Origin: Originating in the western Mediterranean, it has been growing here for over 400 years and is our commonest evergreen species. Because of its resistance to salt-laden winds, it is often used as a windbreak in coastal areas in the south.

The alternative name of Evergreen Oak tells us that this is an evergreen species and the Latin name of Quercus ilex tells us that its leaves are very like those of the Holly Ilex aquifolium. In fact, "holm" is an Old English word for a holly bush. It is, then, quite different from the other species at Keele.

Leaves: the leaves are holly-like, being spiny (when young), leathery and shiny green above and felty beneath.

The bark is unlike the other species too, being almost black and cut into very small squares - reticulated.

Fruit: the acorn is 2/3 enclosed in its cup.