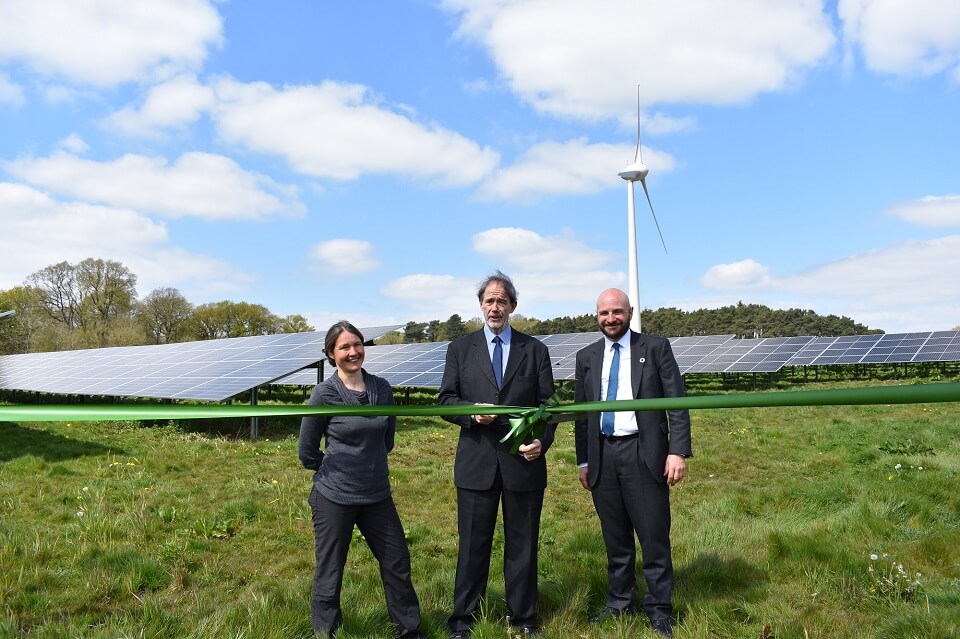 A pioneering renewable energy park at Keele University producing up to 50% of the campus’ electricity has been officially opened at a ceremony this week.

With combined battery storage, the site supplies up to 50% of the campus’ electricity requirements, and any excess energy generated is fed back into the local power grid to serve neighbouring local communities, passing the benefit on to them.

The park is linked to a Smart Energy Network Demonstrator (SEND), a state-of-the-art real-time energy management system designed and installed in partnership with SIEMENS UK, which optimises the balancing of generation, distribution, demand and storage across the campus.

The park was officially opened this week by Keele’s outgoing Chancellor Sir Jonathan Porritt in his final Keele engagement, alongside Professor Zoe Robinson – Director of Keele’s Institute for Sustainable Futures, and Chris Langdon from EQUANS – who delivered the energy park.

Professor Mark Ormerod, Deputy Vice-Chancellor and Provost at Keele University, and the University’s lead for sustainability, said: “It’s fantastic to have such a major low carbon energy generation capability on our campus, which already generated almost 50% of our total campus electricity needs in March. As we move into the summer months, we will see it generating well in excess of our campus electricity requirements, resulting in significant quantities of renewable energy being exported to the local community.

“This outstanding facility has been developed through a tremendous partnership with EQUANS. The direct integration with significant battery storage capability with Europe’s largest Smart Energy Network Demonstrator is particularly exciting and will result in significantly increased energy efficiency on campus.

“The park is a fantastic visual symbol of our long-standing institutional commitment to sustainability over many years, which has seen Keele develop an international reputation and profile in this area, and being awarded Global Sustainability Institution of the Year in 2021.”

Chris Langdon, Business Consultant from EQUANS added: “It has been a pleasure to play a part in bringing Keele’s ambitious vision to life. EQUANS will own and operate the energy park through its 25-year life span, so we are heavily invested in the success of this scheme. We hope other higher education estates will look to replicate the work we have done here as we strive for a net zero carbon future.”

The project represents a major step forward in support of Keele’s institutional pledge to be carbon neutral by 2030, and represents just one example of its commitment to embedding sustainability in all of its campus operations.