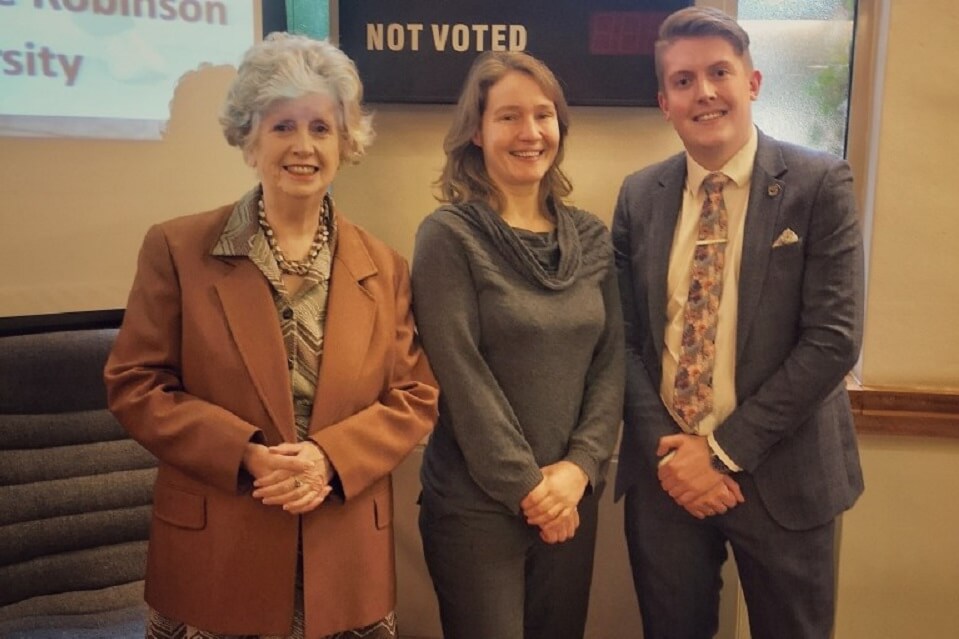 Picture caption: L-R Leader of the Council, Councillor Sybil Ralphs; Professor Zoe Robinson; and Councillor Joe Porter at one of the training sessions.

A Keele professor has been working with a Staffordshire local authority to train councillors on the best ways to tackle climate change.

Staffordshire Moorlands District Council has announced its pledge to become carbon neutral by 2030, and has been working with experts and local groups to start developing an effective plan towards this goal.

Among the experts they have consulted is Keele’s Professor Zoe Robinson, who has been delivering training sessions for district, town and parish councillors to help them understand the science behind climate change and how it affects their local area.

Two sessions have already taken place, with more planned for the rest of the year.

Promoting sustainability and finding new ways of dealing with climate change is a key institutional priority at Keele, with staff and students being involved in a number of green initiatives on campus. Last year Keele also declared a climate emergency and pledged to become carbon neutral by 2030.

Keele is also at the forefront of research into new ways of tackling the climate emergency thanks to its Institute for Sustainable Futures, which was launched to drive research into issues such as climate change, food security and clean energy on a local, national and global scale.

The University has also transformed its campus into a 'living laboratory' to test new clean energy networks and technologies, including the innovative HyDeploy project and the largest single, integrated electricity and heat Smart Energy Network Demonstrator (SEND) in Europe.

Professor Robinson said: “Addressing the climate emergency requires all of us to be aware of, and act on, ways that we can reduce greenhouse gas emissions in our areas of influence.

“The council is demonstrating real leadership in ensuring that their councillors understand more about the climate emergency and are able to build this into their work and decision making for the council.”

Councillor Joe Porter, Cabinet Member for Climate Change at the council, added: “This training is part of our long-term partnership with Keele University who are working closely with us to advise the council on the climate change action plan.

“As a Keele graduate, I’m delighted we are able to access this academic expertise to help shape our response to one of the biggest and most important challenges we all face.

“We will be organising more of these training sessions so that more and more decision makers, influencers and those members of staff responsible for undertaking projects and actions are able to benefit from a better understanding of the scale of the challenge and what we can do about it.”