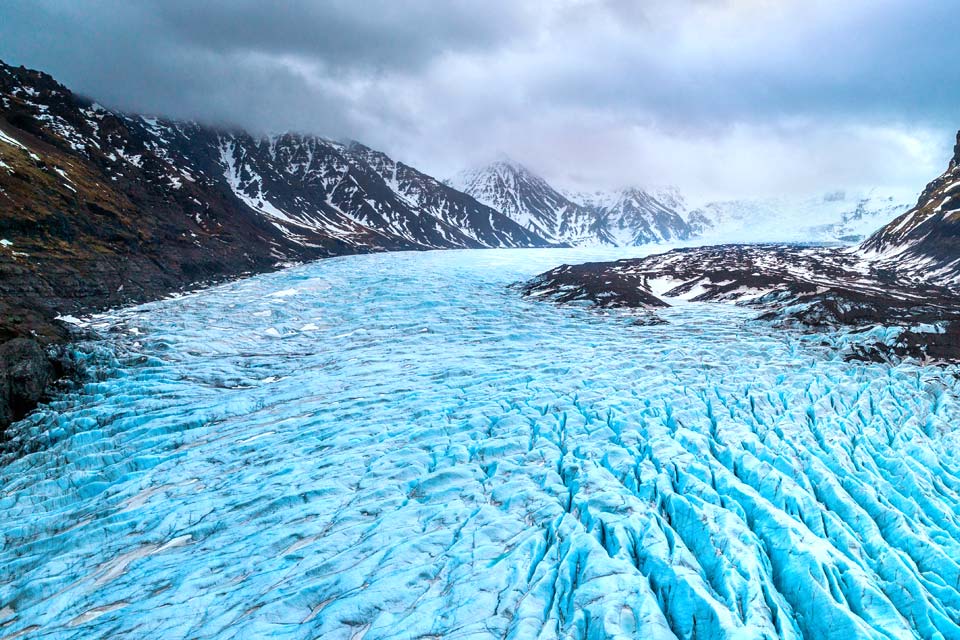 New research at Keele University has revealed the impact of climate on glacier erosion rates and the significant connections between climate change, glacier behaviour, and the formation of landscapes.

Keele University’s Dr Peter Knight and Dr Richard Waller from the School of Geography, Geology and the Environment are part of a team of researchers who have overturned previous findings about the link between glacial flow and erosion rates.

The new research, published in Nature Communications, shows that the speed at which glaciers move, and the climate in which glaciers exist, controls how quickly they cut downward into bedrock, confirming the importance of glacier flow speed in determining the rate of glacial erosion

The research, led by the University of Dundee and University of Sheffield, sought to understand which factors control the complex process of glacial erosion and why it happens at different rates. These processes are difficult to observe and occur under hundreds of metres of ice. Some glaciers only strip away a small amount of bedrock each year, whilst others cut down several centimetres, which can produce large amounts of sediment that is then washed into meltwater streams, lakes, or the sea.

For the first time, the analysis also shows the clear importance of local temperature and precipitation in determining glacial erosion rates on a global scale. The research examined 38 glaciers and the impact that climate has on their erosion rates. The data showed that the most erosive glaciers are those within relatively warm climates with lots of snowfall, such as Alaska, while glaciers in colder climates with hardly any snowfall, such as Antarctica, cause very little erosion.

In demonstrating the combined influence of temperature and precipitation on erosion rates, the research provides new insights into both the development of the spectacular landscapes of the UK and the potential consequences of ongoing climate change.

Dr Knight said: “This project has added to a long history of research on glacier-bed processes at Keele, and it was particularly exciting to make this connection between glacial erosion and the broader context of the global climate system, which opens up further opportunities to predict how glaciers might respond under future changing climates.”

Understanding glacial erosion is important as it can help to inform how humans should behave in these environments. For example, hydropower schemes can become silted up with sediment from glaciers, and erosion can also impact the safe burial of radioactive waste, with countries like Finland and Sweden needing to consider the possibility that glaciers could grow in the future and dig out any such waste.

Dr Waller added: “In highlighting the influence of precipitation and glacial erosion rates, this research helps to explain why some of the most dramatic glacial landscapes have been created in the UK which is well known for its wet weather as a maritime nation.”