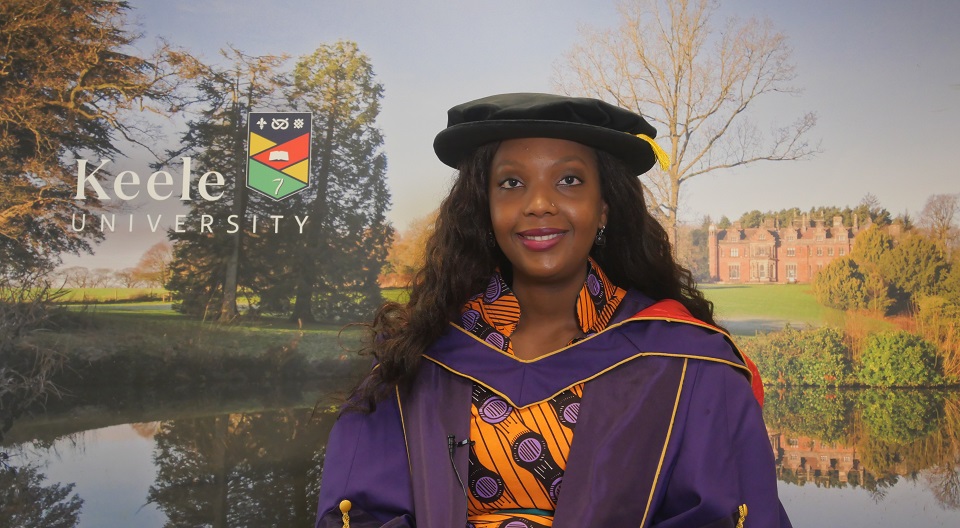 An advocate for women in business and one of Africa’s brightest young achievers Nataliey Bitature was awarded an honorary degree from Keele University this week.

Nataliey, who graduated from Keele in 2013 with a degree in Business Management and Education, attended Keele’s Winter Graduation on Thursday 23 January to receive her Doctor of Science award for her inspiring leadership and work to empower young women.

Nataliey is the Chief of Staff of Uganda’s Simba Group, a conglomerate of companies spanning the hospitality, energy, telecom, and real estate sectors, as well as a foundation which she oversees the operations of. She has been recognised amongst Africa’s brightest young achievers by Forbes “30 Under 30”, and the World Economic Forum named her one of the Top 5 African Innovators.

Nataliey, who has credited the University with helping her get to where she is today, said: “It’s so lovely to be back at Keele, I have such good memories of being here. It was my home for four years. I was so shocked to be asked to accept the honorary award and I feel really touched. This means so much to receive this award from Keele as this is where my journey started and it helped propel me into the world.

“I chose to study at Keele because I could do two majors at the same time, as I wanted to do Business Management and Education Studies, and even while I was doing that I got to do lots of other modules from different faculties too and learn so many interesting things. It really suited the variety that I was looking for and gave me a diverse foundation which has helped me grow in my career.”

After graduating from Keele, Nataliey attended the Hult Business School in San Francisco where she completed an MSc in Social Entrepreneurship. During this time she co-founded the concept for Musana Carts – a business that creates solar-powered street vending carts designed for micro-entrepreneurs across Uganda. Musana Carts has since partnered with Coca-Cola, The Rockefeller Foundation, Mastercard Foundation and Ideo.org.

After working with young women in urban and rural Uganda, Nataliey launched an initiative called ‘HER’, an online community programme where young women in business are equipped with both business and life skills that are designed to help them grow in their businesses and in life. Nataliey has also been invited to speak to the United Nations Development Programme, the United Nations Population Fund, Rotary International, and the International Labour Organization, advocating for youth and women's empowerment.

Nataliey added: “I think especially for women we need to have more confidence in ourselves and speak up more. We still get undermined and dismissed quite easily in business as usually you’re in a male-dominated room, meeting or field and you need to believe you’re there for a reason and your value will be recognised by other people. I would advise young females to not be afraid to speak up, to ask questions, give your opinion and contribute. It’s really important that younger women have female role models and mentors and see women succeed in these male-dominated fields, so I think it’s up to us who are already working in the sector to be out there and try as much as we can and be visible as we do it.”