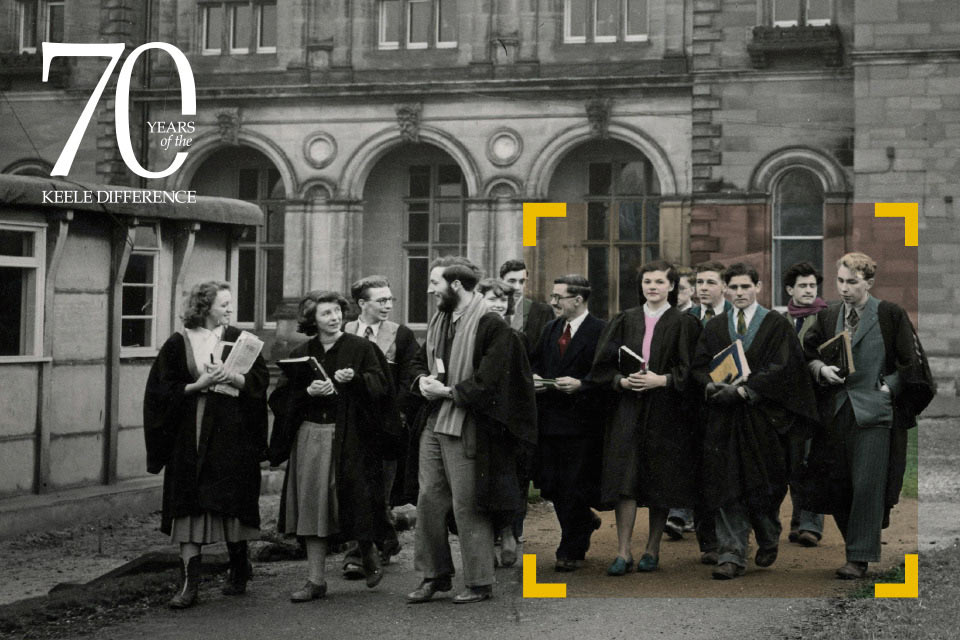 Originally founded in 1949 as the University College of North Staffordshire, Keele was the first new University of the 20th Century and was created to meet the demands of a new kind of society, economy and world. Keele was granted university status by Buckingham Palace, with the Royal Charter being signed on 11 August.

Former Vice-Chancellor of Oxford University, Alexander Lindsay, 1st Baron Lindsay of Birker, was the founding Principal of Keele. In an era of post-war austerity and idealism Lord Lindsay had a vision known as ‘the Keele Idea’, which was to design Keele to be different, starting a tradition of innovative teaching and interdisciplinary research, and to ensure that student learning was relevant to societal challenges.

Through his close connection to the Workers Educational Association (WEA), founded in Longton, Lord Lindsay saw there was a demand for academic and intellectual stimulation in Stoke-on-Trent, which ultimately led to the creation of the University in 1949.

During its 70th year, Keele was delighted to have welcomed Sir David Attenborough to campus to open new state-of-the-art science laboratories named in his honour, as part of a £45 million development in the Faculty of Natural Sciences.

Building on the University’s 70 years of experience, Keele has also developed a multi-million-pound building to house the Keele Business School and Smart Innovation Hub, supporting innovation-led businesses, which opens this month

The campus may have changed over the last 70 years but with sustainability embedded into the University curriculum and strategy, the campus remains as green as ever and has been ranked No.1 in the UK in the latest UI Green Metric World University rankings for its green setting and campus infrastructure, and Top 20 globally.

Keele University Vice-Chancellor Professor Trevor McMillan, said: “We’re delighted to mark our 70th anniversary and reflect on the University’s long and proud history. I’m thrilled that over the last 70 years Keele has been recognised for its commitment to delivering an outstanding student experience, created global impact through our research, and become a leader for sustainability in the education sector.

“Keele has enjoyed an exciting and successful first seven decades and we’re looking forward to what more we can achieve over the next 70 years, including through our commitment to broadening our curriculum, continuing to invest in the campus, and further strengthening Keele as a civic anchor in the local region and beyond.

“Lord Lindsay’s vision was to pioneer innovation and regional education, a mission which still resonates with Keele today.”