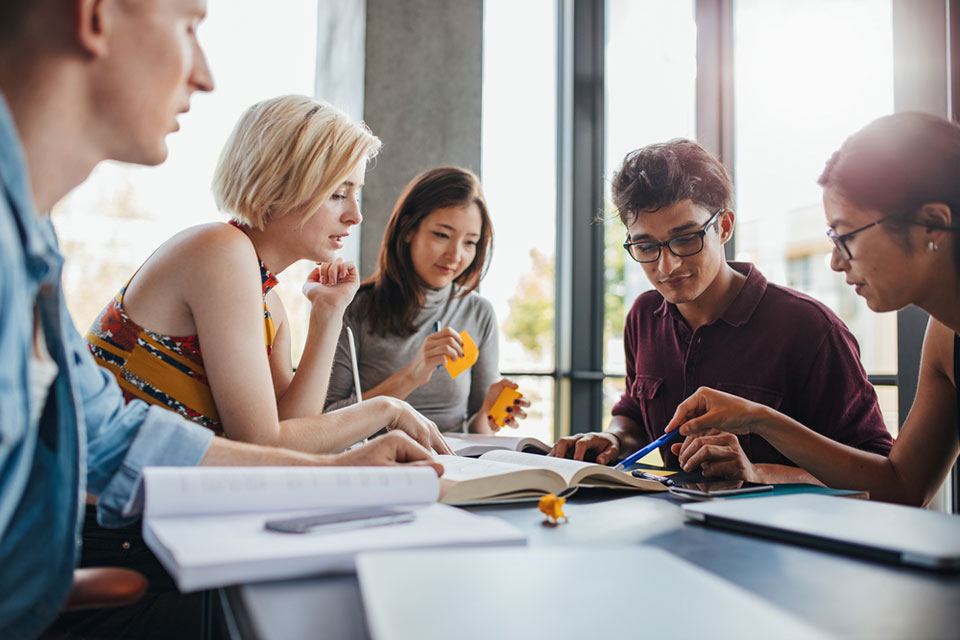 Four students from Keele University recently attended and presented their work at the British Conference of Undergraduate Research (BCUR), thanks to the generous support of Keele alumni.

The four students from Keele joined over 600 presenters from 69 different institutions to showcase their undergraduate work at the national conference, held at the University of South Wales.

Rebecca Pierce, Imaan Waqar, Kathryn Dickins, and Yuxin Guo all travelled to Cardiff to present their work on a variety of subjects. The students received funding from the Keele Key Fund, which is funded by Keele Alumni and friends of the University, to cover their travel, accommodation and conference fees.

All four students presented work that they had previously showcased at Keele’s JADE Student Learning Undergraduate Conference (JSLUG), and were supported in their BCUR applications by Dr Chris Little from the Keele Institute for Innovation and Teaching Excellence (KIITE).

Rebecca Pierce, who is now a postgraduate student at Keele University, presented her undergraduate research on the history of lesbian relationships in Georgian Britain, and why women were able to avoid legal persecution. Rebecca explains:

“I first heard about the British Conference of Undergraduate Research (BCUR), whilst attending the Jade Student Learning Conference at Keele last June. Dr Chris Little had mentioned what a great event it was and encouraged everyone to apply. As I am looking at pursuing a PhD in the future, I thought it would be a good chance to get some more conference experience, and I was right!

“Although I had already been to a few conferences, they were all on a much smaller scale and specific to my subject, so being at such a vast interdisciplinary event was quite a new experience for me. Even though the delegates came from different universities and studied different subjects, everyone was united by their shared passion for research.”

BCUR promotes undergraduate research in all disciplines, and offers students the opportunity to engage in publication, presenting and networking activities; enhancing their transferable skills in these areas. It also allows undergraduate students to establish networks and share their work with the wider sector.

“These students all shone at last year’s JSLUG conference, showing memorable amounts of creativity, determination and academic rigour. When initially discussing BCUR 2019 with these students, I had no reservations in supporting their applications and sourcing funding to ensure they could attend and fully enjoy the conference itself. The work they took to BCUR 2019 somehow managed to improve upon their stellar showings at last year’s JSLUG and I am incredibly proud that Keele supported this endeavour - they represent our undergraduate community exceptionally well.”

Kathryn Dickins delivered two presentations on the ethics of discussing eating disorders in narrative literature, and transuranium elements. Yuxin Guo’s poster presentation explored her work on a technology-based peer-to-peer support approach to student learning and engagement - Swattup, whilst Imaan Waqar presented her work on the science behind aromatherapy.

“For me, the most memorable and striking thing about the event was the sheer diversity in the research topics. Over the two days, I listened to talks on everything from yacht design innovations to post-colonial views of Africa to recent advances in hip surgery. The standard of papers was very high, but it was still a supportive atmosphere, the audience was engaged and encouraging and asked plenty of questions and gave helpful feedback. It was a truly great space to present in for both first years and recent graduates alike and I would recommend that everyone apply for BCUR 2020!”

This year, the JADE Student Learning Undergraduate Conference takes place on 30th May. Find out more about the JSLUG Conference.

BCUR 2019 took place at the University of South Wales, from 15th-16th April 2019.
Find out more about the British Conference of Undergraduate Research.

Abstract: As eating disorders have become more prevalent in society it is natural that their prevalence in literature would also increase, but to what effect? This paper examines the portrayal of eating disorders in narrative literature, and considers whether these portrayals may be construed as informative or instructive: further glamorising and fetishising these illnesses or providing useful and valid insights into what is often a poorly understood topic. This study uses the Beat Media Guidelines for Reporting Eating Disorders (2018) to establish criteria against which a range of texts from the last decade has been examined. Certain features, considered to be dangerous by Beat, have been identified and quantified within each of the texts, and their effect on both the narrative, in a literary sense, but also on a potential reader, in a human one, have been considered. These data have been used alongside critical analysis of the texts to determine a judgement on each one as responsible or not. The findings from this sample of texts have allowed conclusion that it is possible to write narrative eating disorder literature responsibly, and to begin identifying specific ways by which it can be achieved.

Abstract: Transuranium elements rarely make headlines. Decades on from the Manhattan project and the opening of the world’s first nuclear reactor, what else has research into transuranic elements contributed to both the world and to science as a whole? From Glenn Seaborg to the relatively recently discovered Nihonium, Moscovium, Tennessine and Oganesson, and the work that is being done to progress further up the shores of the island of stability; this literature review will examine the advancements that have been made in the field of nuclear chemistry leading us up to the present day and consider the future of this fascinating field. At a time where funding is increasingly hard fought, what are the benefits of investing in this frontier field? Is it simply just an ego-trip for the academics involved or is there tangible application for their work? This study aims to demonstrate the purpose of work surrounding the transuranic elements, from their academic application and what we can learn from continuing to push atomic numbers ever higher, to the practical uses of transuranic elements such as their use in smoke detectors, and their chemical applications. This paper will pay specific attention to recent literature to show the integral role that transuranic elements play not just within science, but in our lives.

Abstract: Twenty-first century education has changed immensely due to the integration of technology and online resources as a learning strategy, providing students with a boundless amount of information. However, a time-quality conundrum appears, where many students desire high-quality answers at a quick pace because more time is being spent on searching for information than answering their queries. To ascertain how students prefer engaging within an educational context, and to investigate current learning patterns, a literature review looking at students as consumers, student transition to higher education, student engagement online, trust and online services, factors influencing student return rate, flip learning and community learning was developed. Additionally, an action research approach focusing on the opinions of students and a centrally-based learning development team at Keele University was employed. This utilised interviews with representatives from the Keele student learning team; focus groups with students and academics; student questionnaires, and an investigation of current online engagement platforms and their audiences, which provided potential requirements from the perspective of the target audience. Results reinforced that students acknowledged the time-quality conundrum issue and a university endorsed peer-to-peer learning platform which provides relevant answers to their questions in a time-friendly manner would be regarded as highly beneficial. However, instant answers are not considered vital if compromised by high-quality information within a reasonable timeframe, consequently, a mobile-based peer-to-peer learning support platform was developed from this investigation. This action research project along with the literature review and the mobile application ‘SwattUp’ will be discussed in this poster presentation.

Abstract: The 2017 LGBTQ+ pride parades were celebrated with an extra level of zeal, as they marked 50 years since the partial decriminalisation of homosexuality. These parades hailed the passing of the Sexual Offences Act 50 years earlier as a landmark moment, signalling a shift towards acceptance for the LGBTQ+ community. While this may be true, the act was only legally beneficial for men, as female homosexuality was never unlawful. So why, when male-male sex was considered a criminal offense in England for more than 400 years, were women never legally targeted? Although there are works on lesbian history, the pool of scholarly work is still sparse, especially in comparison to works on male homosexuality. Often work in this area has hinged on assumption that society was entirely oblivious to intimate female relationships. In fact, this was far from the case, evidence shows that there was not just awareness, but some acceptance of such relationships even in the Renaissance period. As the 18th century approached, however, the feelings towards homosexual women became almost as hostile as those directed at men. That Georgian Britain did not prohibit female same-sex desire at this point seems counterintuitive, and it is why this period specifically shall be the focus of this paper. By utilising 173 contemporary medical documents, diaries and letters, this presentation aims to not only demonstrate that there was a wider awareness of lesbian relationships than previously thought, but to offer an alternate explanation as to why women were able to avoid legal persecution.

Imaan Waqar, The effect of lavender oil and Olbas Oil as olfactory stimulants on EEG rhythms.