The 90s saw the introduction of CCD (charge-coupled device) electronic imaging at Keele, under the direction of Dr (now Prof) Tim Naylor. The first camera obtained was an SBIG ST6, which was used by many astrophysics PhD students (as part of their research) and also to show the general public deep sky images of galaxies etc. Data collected using electronic imaging on the Thornton Telescope continues to be used in research, most recently in follow-up observations of extra-solar planets (see below).

In 1993, Mrs Davies, Penkridge kindly gifted an 8" refractor to Keele. The optics thought to be late 19th century in origin; remounted by Frank Davies in the 1970s. This has proved popular (it is very easy to use), but it is not permanently mounted at present.

One notable event was observation of the collision of comet Shoemaker-Levy with Jupiter. All the telescopes were pressed into use, with some additional ones outside. It is estimated that 250 people were present on that one evening (our largest single attendance on any one night?). Two comets were also very significant: Hale-Bopp (where it is estimated 1000 visited in one week) and Hyakutake.

The BBC computer-control system was replaced by a PC and analog hybrid control system, developed by Keith Garwell (one of the Observatory Crew). This involved dedicated analog circuitry and over 1000 lines of C coding; since then, evolution of the code means that there are now nearly 2400 lines of code. [It is planned to replace this system in 2011, to provide a better interface to other hardware and software, to improve ease of use. But it has provided excellent functionlity for over 10 years.]

One concern in the 1990s was the gradual increase in light pollution, partly due to the expansion of the University, particularly with the building of a new road near the Observatory. So consideration was given to moving the Observatory, and some exploratory work was done on possible nearby locations. After careful thought, this plan was dropped, partly because of cost (probably about £400 000 in those days). But, more importantly, because of access. Keele Observatory is unique in being easily accessible to on-campus students (a short and safe walk from their rooms) and the public. A new site would have necessarily reduced this ease of access. Careful control of campus lighting (the University has policies that support 'dark skies') has meant that obervations have not been significantly damaged (though the observers might wish all the campus, Stoke, Newcastle, road, etc away!). A bank and fence between the Observatory and road has helped keep light pollution down.

One benefit of the site-change study was that a 10-inch Meade telescope was purchased for site-testing. This has proved to be a most-useful instrument. It is typical of modern amateur telescopes, and very useful on public evenings. It has computer 'go to' control and can 'fast-slew' to any desired target. 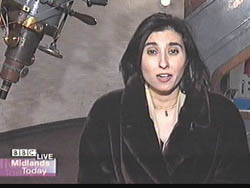 Keele Observatory appeared live on Midlands TV, when Shefali Oza (opposite) visited Keele on the night of the Leonid meteors. Sadly, the weather was cloudy, but the interview went well.

In 2000, Prof Naylor left Keele University to go to Exeter University, where he is now Head of the School of Physics.