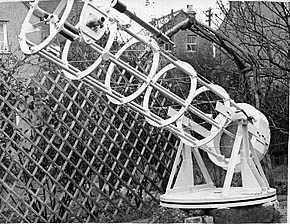 The Hindle telescope before it came to Keele (note the eyepiece at the primary focus). Larger image

This telescope is a 17-inch (43.3 cm) reflector, with a focal length of 74 inches (2.44 metres). It was made by Hindle (1869–1942) in 1939, probably for Mr Leslie Dilks of Manchester Astronomical Society. The primary mirror is plate glass. Dr Maddison purchased it for Keele in 1966. Prior to that, it was in the posession of Roy Worvill of Chipping Norton and (briefly) Father McKeon (Stoke area). It had an altazimuth mount, as seen below.

Once at Keele, Hindle's telescope was mounted on top of the 12-inch Grubb refractor, somewhat in the way the original Cartes du Ciel astrograph would have been mounted in the 19th century. However, the Hindle was very massive, the open tube having been made in steel (Hindle was originally an engineer by trade). In order to reduce the mass, a new fibreglass mirror cell was made, but the whole telescope had to be carefully rebalanced. The telescope (as seen above) had been designed to be used at Newtonian focus, but a hyperbolic secondary was made by Jim Hysom, so that the telescope could be used at the Cassegrain-Newtonian focus (sometimes called a modified Cassegrain). Dr Maddison later drilled out a hole in the primary mirror, so that it could also be used at Cassegrain focus.

The Hindle has not changed much since the 1970s. It has rarely been used, as the drive (being old) isn't good enough for long-exposure imaging. In the 1990s, it was used to take a small number of photograps at primary focus. In 2006, it was used with a sensitive video imager as an experiment; five of Saturn's moons could be seen in real time. As the 1939 optics would not be suitable for imaging using modern CCDs (charge-coupled devices), this telescope should now be considered just a historic instrument. Three recent (2004) photographs of the Hindle and Grubb telescopes are shown below: