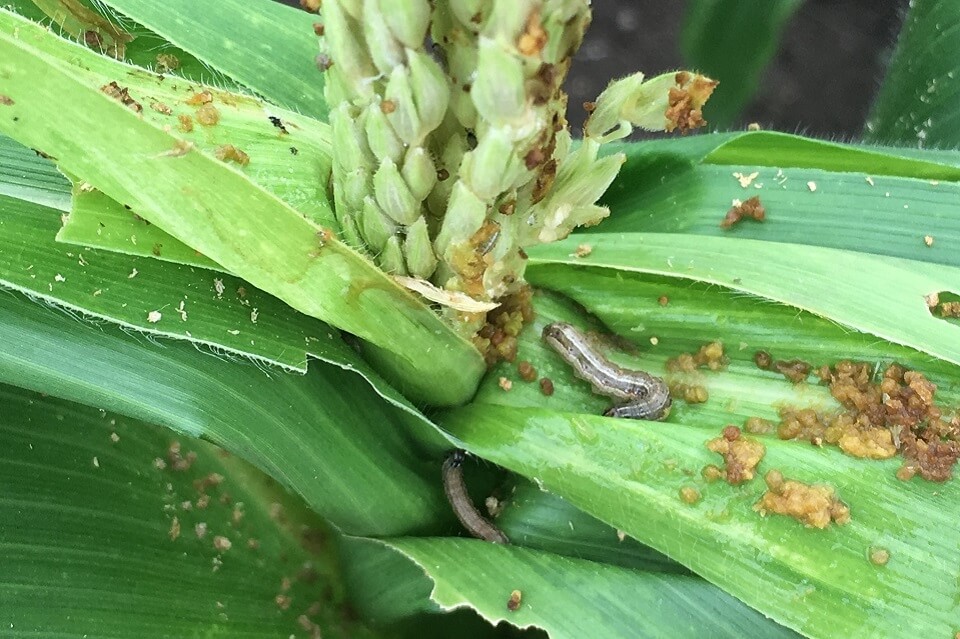 The fall armyworm – an invasive pest – has recently invaded and rapidly spread across large areas of Africa, where it has become a major threat to agriculture, sustainable food production, food security and livelihoods, affecting at least 400,000 hectares and causing estimated crop losses worth $3 billion a year. The fall armyworm is particularly attracted to maize, which is the main staple and cash crop for 300 million smallholder farmers in Africa. This means an infestation can not only have a significant impact on food security, but also cause financial harm as well.

Push-pull farming involves planting companion plants around food crops like maize, as a way of protecting them against damaging pests like the fall armyworm. Crop losses are ten times lower when push-pull is used.

This research, published in Frontiers in Ecology and Evolution, has shown that push-pull farming can help protect these crops by not only repelling pests in the first place (push) but also by attracting other insects like parasitic wasps that control the armyworm pest (pull) as a natural defence mechanism. The study identifies the bioactive compounds that cause these effects.

The researchers, including co-lead author Professor Toby Bruce from Keele University, tested the potential use of push-pull farming in a variety of settings including field conditions and in the laboratory.

Their results showed that the chemical scent compounds given off by the plants, known as “volatiles”, had a repellent effect on moths whose eggs hatch into fall armyworm caterpillars. Electrical recordings from insect antennae revealed which chemicals insects were sensitive to, and behavioural responses to the identified chemicals were characterised in insect behaviour tests.

This means the companion plants not only repelled most of the pests, but also called natural defenders to deal with the ones that did attack the maize plants, with the findings highlighting the positive impact of adopting this farming technique.

Professor Bruce said: “Our study shows the mechanisms by which “push-pull” companion cropping can effectively control fall armyworm. We have identified and characterised scent chemicals from the companion crops that repel and reduce egg laying by fall armyworm moths while also attracting beneficial natural enemy insects that attack the pest.”

“The fall armyworm moths employ olfactory cues to locate their preferred host to lay eggs, subsequently enabling its larvae to easily find food source upon hatching. This process is disrupted when the moths detect non preferred odour cues around their host plant leading to deterrence of the egg laying pest. Intriguingly, the same odour cues are attractive to the parasitic wasps, the pest’s natural enemies, making it difficult for any feeding pest to survive.”

The researchers have also developed a mobile app which gives farmers practical information about how they can start using push-pull farming.