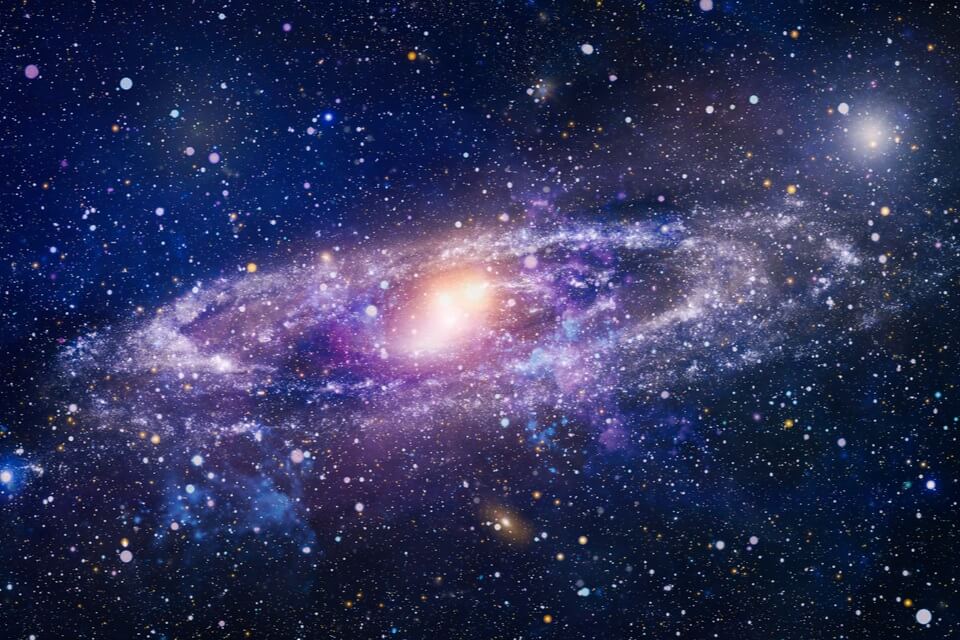 To answer the question of how galaxies were formed, we need to travel back in time to close to the birth of the universe, nearly 14 billion years ago. The great thing about the universe is that we can do exactly that. Because light takes time to travel to us, when we look at a distant galaxy we are seeing it as it was in the past.

The furthest back we can look is 400,000 years after the birth of the universe. If we imagine the history of the universe as being the length of a person’s life, this would be like looking back to about 20 hours after they were born. What we see is a wall of glow. This is the cosmic microwave background light left from the mighty Big Bang that created the universe.

The creation of matter

The Big Bang first created a stupendous amount of space, and three minutes later filled it with stuff – what we call matter. But this matter was not evenly spread out. It was clumped together in strings and knots called the “cosmic web”. We can see this in the wall of light – it does not have an even colour. There are clumps of colour reflecting where matter was lumped together.

As the universe cooled, gravity started to draw matter towards those clumps. Where it piled up sufficiently, gravity really took off, pulling matter together, until the first stars were born that lit up the universe. Each clump of matter created myriad stars.

We don’t know whether each of these clumps became a galaxy, or whether clumps merged together to form bigger galaxies.

Another mystery is added by the supermassive black holes that lurk at the centre of all big galaxies. Black holes are regions in space where gravity is so strong that even light cannot escape. One four million times as massive as the Sun resides in the heart of our own Milky Way. The bigger the galaxy, the bigger the black hole it surrounds. This tells us there must be a close connection between the development of galaxies and of these black holes.

However, we don’t really know how these black holes formed. We do know this must have happened very early on in the history of the universe. One idea is that the densest clumps of matter might have collapsed to become a black hole. Another is that the first stars to have lived and died left black holes, and these then merged together to become a huge single black hole.

It turns out that, if we think we understand gravity, there must be an awful lot more matter in the universe than we can see. Astronomers have given it a name: “dark matter”. The cosmic web is thought of as being largely made of dark matter. We think that galaxies are typically made up of more dark matter than ordinary matter, and that there’s even more in between galaxies. If this is right, dark matter must have had a huge effect on the formation of galaxies, but we don’t know exactly how.

The creation of groups of stars from the matter produced by the Big Bang is not the end of the story. Take the Milky Way as a typical example. The oldest stars in the galaxy are spread out in a halo. These stars are made almost entirely of the first building blocks of the Universe – hydrogen and helium.

Closer to the centre of the galaxy, and in a flat disc around it, stars often contain a lot more other elements, such as carbon and oxygen. These stars were formed out of the ashes of exploded stars that created those elements. As well as new stars, these elements went on to form planets – like our Earth.

The Milky Way is still growing, in two ways. There’s actually a lot of matter in between galaxies. When the temperature of this matter cools it can rain onto the Milky Way and fuel the formation of new stars. Also, the pull of the Milky Way’s gravity means that it gobbles up entire small dwarf galaxies.

Eventually, all these processes will fizzle out and the Milky Way will transform into a galaxy of old, red stars.