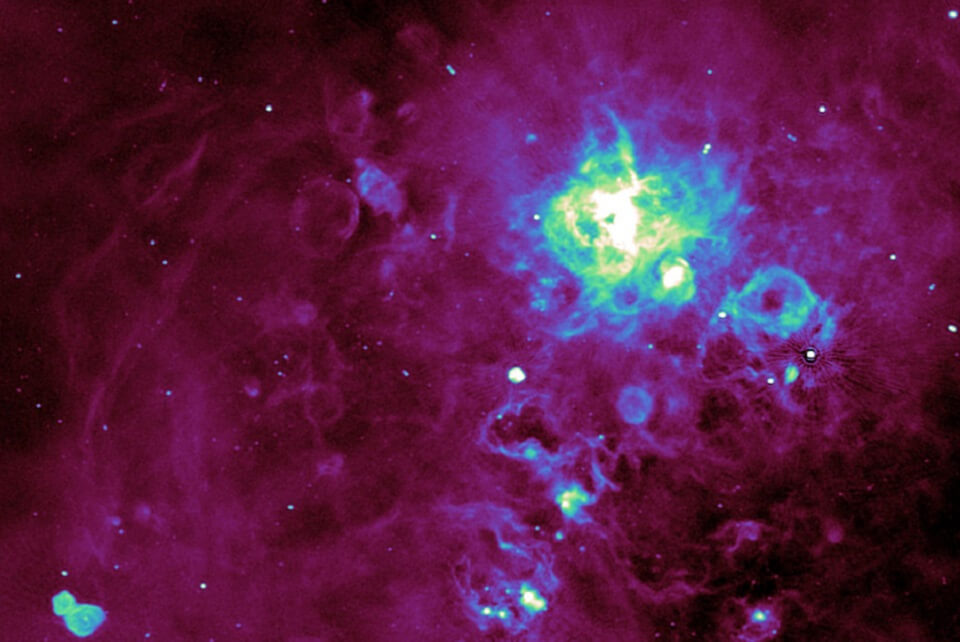 Scientists have measured thousands of nearby stars and far away galaxies that have never been identified before at radio wavelengths, while studying a galactic body that neighbours our own Milky Way galaxy – the Large Magellanic Cloud.

Led by Keele University PhD student Clara M. Pennock and Reader in Astrophysics, Dr Jacco van Loon, the international team of researchers used the Australian Square Kilometre Array Pathfinder (ASKAP) telescope to “photograph” the Cloud at radio wavelengths and study the stellar structures within, taking some of the sharpest radio images of the Cloud ever recorded.

The Large Magellanic Cloud is a galaxy which borders our own, the Milky Way, and is known as a satellite dwarf spiral galaxy. It is around 158,200 light years away from Earth and is home to tens of millions of stars.

Due to its proximity to the Milky Way, it provides an excellent benchmark for researchers studying fundamental questions, such as how stars form and how galaxies are structured.

The researchers not only took the sharpest radio images of the Cloud ever recorded, but during their analysis they also studied the stars themselves which form the Cloud’s structure, including the Tarantula Nebula, the most active star-formation region in the Local Group. Furthermore, newly detected radio emission has also been studied from distant galaxies in the background as well as stars in the foreground from our own Milky Way.

This study, published in Monthly Notices of the Royal Astronomical Society, forms part of the Evolutionary Map of the Universe (EMU) Early Science Project, which will observe the entire Southern sky and is predicted to detect around 40 million galaxies. The data will ultimately be used to give researchers a clearer picture of how galaxies, and their stars, have evolved throughout time.

Lead author Clara Pennock from Keele University said: “The sharp and sensitive new image reveals thousands of radio sources we've never seen before. Most of these are actually galaxies millions or even billions of light years beyond the Large Magellanic Cloud. We typically see them because of the supermassive black holes in their centres which can be detected at all wavelengths, especially radio. But we now also start finding many galaxies in which stars are forming at a tremendous rate. Combining this data with previous observations from X-ray, optical and infrared telescopes will allow us to explore these galaxies in extraordinary detail.”

Dr Jacco van Loon, Reader in Astrophysics at Keele University said: “With so many stars and nebulae packed together, the increased sharpness of the image has been instrumental in discovering radio emitting stars and compact nebulae in the LMC. We see all sorts of radio sources, from individual fledgling stars to planetary nebulae that result from the death of stars like the Sun.”

Co-author Professor Andrew Hopkins, from Macquarie University in Sydney, Australia, and leader of the EMU survey, added: “It’s gratifying to see these exciting results coming from the early EMU observations. EMU is an incredibly ambitious project with scientific goals that range from understanding star and galaxy evolution to cosmological measurements of dark matter and dark energy, and much more. The discoveries from this early work demonstrate the power of the ASKAP telescope to deliver sensitive images over wide areas of sky, offering a tantalising glimpse of what the full EMU survey may reveal. This investigation has been critical in allowing us to design the main survey, which we expect will start in early 2022.”

ASKAP is owned by the Commonwealth Scientific and Industrial Research Organisation (CSIRO). ASKAP is an array of 36 dish antennas with a largest separation of six kilometres, which when combined act like a telescope that is about 4000 square metres in size.

ASKAP employs a novel technique called phased array feeds (PAF), and each of the 36 antennas has a PAF that allow the telescope to look at the sky in 36 directions at once, increasing the amount of sky that can be observed at once to 30 square degrees on the sky and thus, increasing survey speed.

ASKAP is a precursor to the SKA, the world’s largest radio telescope, which is currently being built in South Africa and Australia, and is headquartered at the Jodrell Bank Observatory near Manchester, UK.