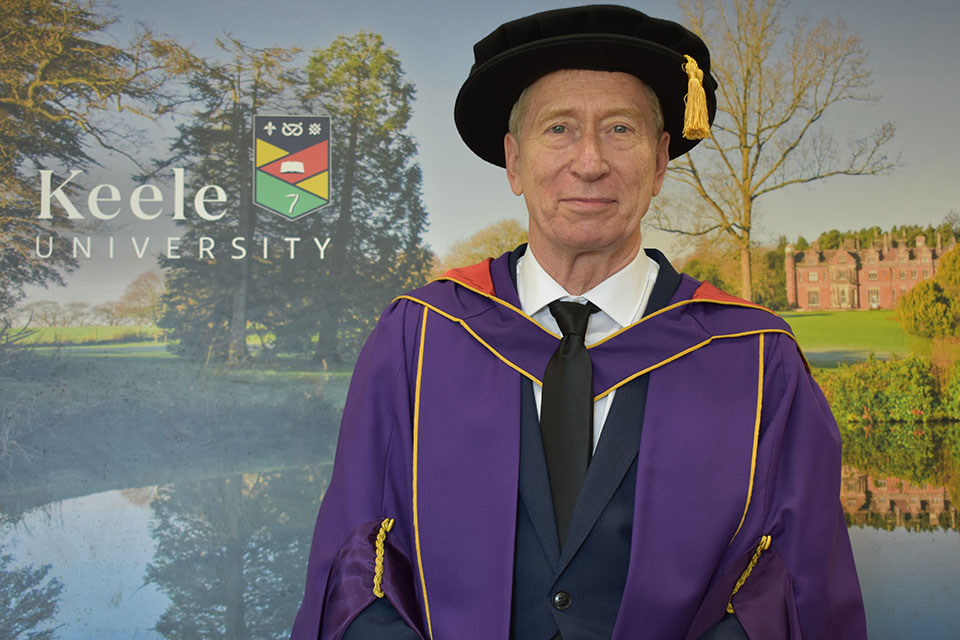 A Keele University alumnus returned to campus this week after nearly 50 years since graduating to receive an honorary degree for his entrepreneurial success in the gaming industry.

Professor Steve Jackson was awarded the Doctor of Letters and commended at one of Keele’s 2019 graduation ceremonies.

Professor Jackson studied biology and psychology following his foundation year at Keele University from 1968-72, and during his studies he set up the first university board game society in Britain. Professor Jackson went on to turn his love of board games into a career and has since become one of Britain’s most innovative and successful games developers and entrepreneurs.

Professor Jackson and his business partner produced a game ‘fanzine’ and secured exclusive European distribution rights to the then-new Dungeons and Dragons fantasy roleplay game. Their business really took off when they opened the first Games Workshop, which now has a chain of over 200 shops. They also wrote gamebooks for Penguin which became number one bestsellers in the children’s charts, and wrote dozens of Tolkein-inspired books selling over 16 million copies across the world.

The entrepreneur is a Professor of Games Design at Brunel University, having played a key role in developing their Digital Games Theory and Design MA.

Professor Jackson said: “I’ve been so lucky over the years to turn my hobby into a business and it’s done quite well. I think everyone should give it a shot - if you have a passion for something and can make a living in it, then go for it. It’s important that students take up the opportunities their course offers and keep an eye on the ball on what you’re being trained for but also follow your dreams.

“I was really impressed with the foundation year, it meant that my degree was over four years but it took me through the history of everything really, from astronomy to the social sciences which were great. I haven’t been to Keele for decades and it’s lovely to be back here again.”