Keele astronomer maps out a ‘cosmic seagull’ where stars are born 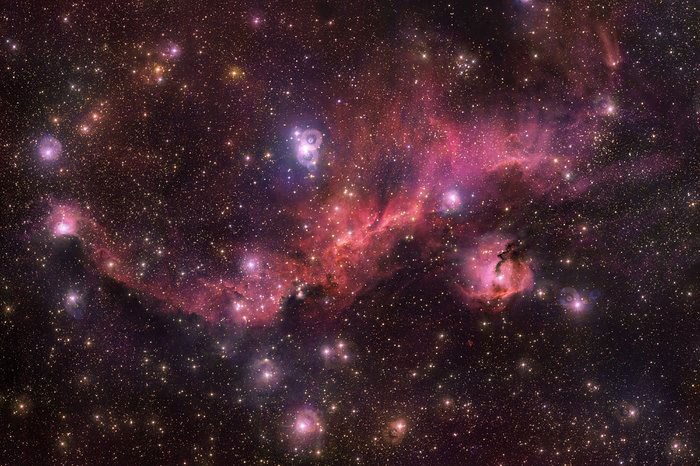 A Keele astronomer has helped to capture a stunning new picture showcasing an enormous nebula where stars are born.

The image of the ‘Seagull Nebula’ - so named for its resemblance to a seagull in flight - was created using the VLT Survey Telescope run by the European Southern Observatory (ESO), with Keele’s Dr Nicholas Wright playing a crucial role in preparing the data for the image.

The Seagull Nebula has a ‘wingspan’ of around one hundred light-years and, according to the ESO, is a hot and energetic birthplace of new stars. It comprises three large gas clouds and is made up of dust, hydrogen, helium and traces of heavier elements.

The bird’s eye is the extremely bright star called HD 53367, which is 20 times more massive than the Sun.

The Seagull lies along the border between the constellations of Canis Major (The Great Dog) and Monoceros (The Unicorn), at a distance of about 3700 light-years in one of the spiral arms of our Milky Way galaxy.

To see the full panorama from eyeball to wingtip, Dr Wright processed and stitched together multiple images of the nebula captured using the VLT Survey Telescope, which were then colourised by a team at ESO to create the awe-inspiring image.

Dr Wright said: “The Seagull Nebula is a cloud of hydrogen that is being heated up by bright and young stars in its vicinity, which will have previously formed in the nebula. There are many such nebulae in our galaxy, with some of the most famous examples being the Orion Nebula, the Rosette Nebula and the Eagle Nebula.

“But each nebula is different and so it can be interesting to explore different nebulae to help us build up a bigger picture of how these nebulae are shaped by the stars around them. Stars form out of giant gas clouds in space known as "molecular clouds", because they are cool enough that molecules can form within them. Once the stars form and begin to shine brightly they often heat up and disperse the cloud they are forming out of, which can bring the process of star formation to a close because the cloud gets too warm to form stars.

“What we're seeing in the Seagull Nebula is this process where the forming stars are heating up the gas cloud and dispersing it. Understanding this process is valuable because it helps us understand how star formation is regulated. This 'feedback' is important in keeping star formation at a low but steady level in galaxies, which is one of the big questions in star formation these days.”