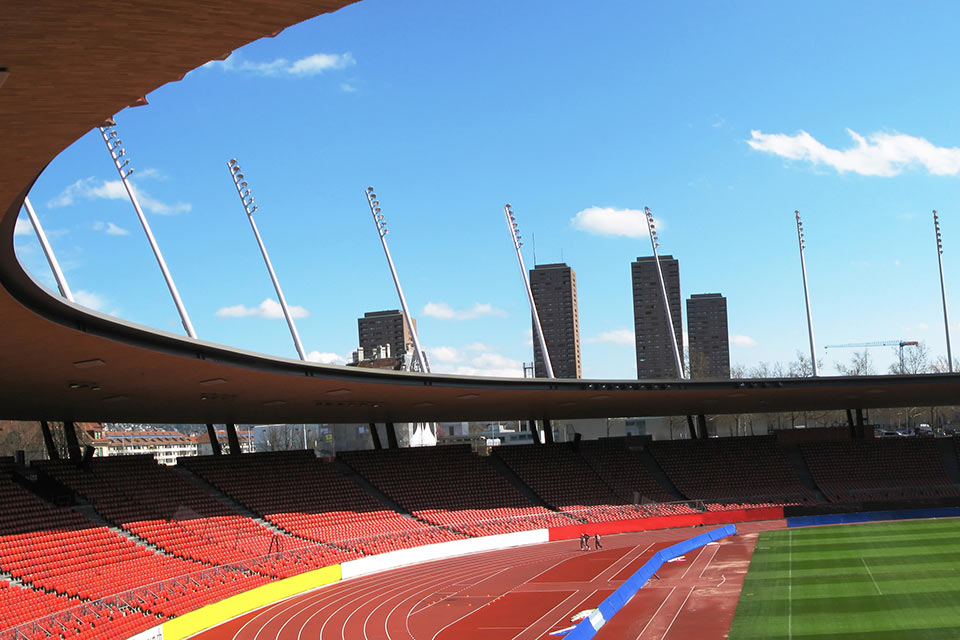 The latest #EnableUK football research observation concluded recently with a high-risk fixture in Switzerland where FC Zürich played FC Basel at the Letzigrund Stadium.  The Police Department of Zurich, working with our academic partners at the University of Bern, are the latest to invite our team to critically analyse and evaluate their safety and security operation, and whilst new to us, the issues in football policing were all too familiar.  Switzerland, like Denmark and Sweden (where #EnableUK are also currently engaged), has a large ‘Ultras’ fan profile and like in those other countries ‘Ultras’ make heavy use of the railway network with associated demands for policing and safety for other commuters.  Also, as with Sweden and Denmark, and indeed the UK, the Swiss police rely on large mobilisations of their officers for high-risk fixtures like the one we observed.

The Zürich police also make extensive use of distance tactics underpinned by weaponry, primarily as a deterrence, such as the presence of water cannons and the deployment of several units equipped with attenuating projectiles and CS gas.  Using this approach, the fans arrived at nearby railways station and were allowed space for their march to and from the ground, but the police weaponry and sheer number of officers at junctions and in key areas makes it abundantly clear where that arrangement starts and finishes.  As a containment operation the Zürich police were able to deliver a highly polished and powerful operation, perhaps unsurprising given the fact they have to deliver this approach several times each season given both FC Zürich and Grasshopper Club Zürich share the same stadium.

The ‘choreography’, if I can put it like that, is common in the countries we have worked with, including UK police forces. Large numbers of travelling fans on the rail network which are the responsibility of a railway police / authority before the host force begins to receive them, the perception of the need to ‘lock down’ the train station where the train arrives and, in some cases, the area around it.  The management of huge numbers intent on marching to the ground, or the decision (more likely in the UK) that the police put fans into a march and then escort them to the ground.  Once at the stadium there are issues to be observed around the possession of pyrotechnics (becoming more common now in the UK) and of enforcing segregation.  At the final whistle this is all repeated on the way back to the station. Repeated for that matter, with little change, season after season.  While highly effective, it’s an approach that is extremely expensive to tax payers, very disruptive to the local community and sends out some troubling signals about the polarised relationships that can and do exist between police and football fans across Europe.  The cancellation of police officer rest days for football duty (where the bulk of the cost comes from) is seen from Sweden to Sunderland, Zürich to Bradford.  Whatever the country or language, the situation is largely the same and so too, perhaps, is the way forward.

As we saw in Copenhagen, railway authorities in Denmark have dramatically reduced disorder, damage and anti-social behaviour on their ‘football specials’ by forging a relationship with fans.  Suffering annually from millions of Kronor damage to their trains, an innovative and forward-thinking train manager took a decision to begin to reach out to the hardcore fans and begin to work with them to facilitate their travel.  After a few months their behaviour began to change, and remember these were self-defined hardcore hooligans – one we spoke to had been arrested 67 times for football related offences - and ‘Ultras’ who now show respect for the facilitation they have been given and for the train and its staff.  There are now very high degrees of self-regulation where fans police themselves.  Indeed, anyone who damages a train or confronts a member of staff soon has to face the wrath of those same hardcore fans - to make sure none of their number cause any issue that might damage the relationship.  Whatever happens outside the stations, at the moment the train and its operating staff will have no issues or damage. A turn-around that is quite remarkable.

ENABLE working alongside the English Football League has put the British Transport Police and the UK Department for Transport together with Danish Railway authority to see how this has been done.  In Stockholm the ‘dialogue police’ model for football policing or ‘Evenemangs police’ uses dialogue and relationship building to de-escalate potential violence and disorder rather than use huge numbers of police to achieve the same objective through coercion and force.  Colleagues from Zurich City Police are keen to explore this reform and so #EnableUK is working to bring these colleagues together to exchange ideas between the two organisations.  But the evidence is already clear, dialogue is the way forward.

Here in the UK, several officers have travelled to each of the countries I have mentioned and in turn we have hosted their counterparts (hopefully with the Swiss Police soon) in a methodology designed to co-produce knowledge with academic support in evaluation and analysis.  It’s a system that has led to the successful deployment of Police Liaison Officers at West Bromwich Albion, Bradford City and the most recent ‘Old Firm’ derby at Celtic Park.  What we have here then is a research methodology, currently across four countries, that puts police commanders, academics, and safety officials together with the common aim of exploring new ideas that have emerged through an evidence and theory-based framework.  After an extremely busy period of fieldwork, what we have seen is a situation where our participating countries share many common issues and it is our goal that through the ENABLE framework perhaps they can be united in the collaborative effort to explore and develop theory and evidence-based reforms.