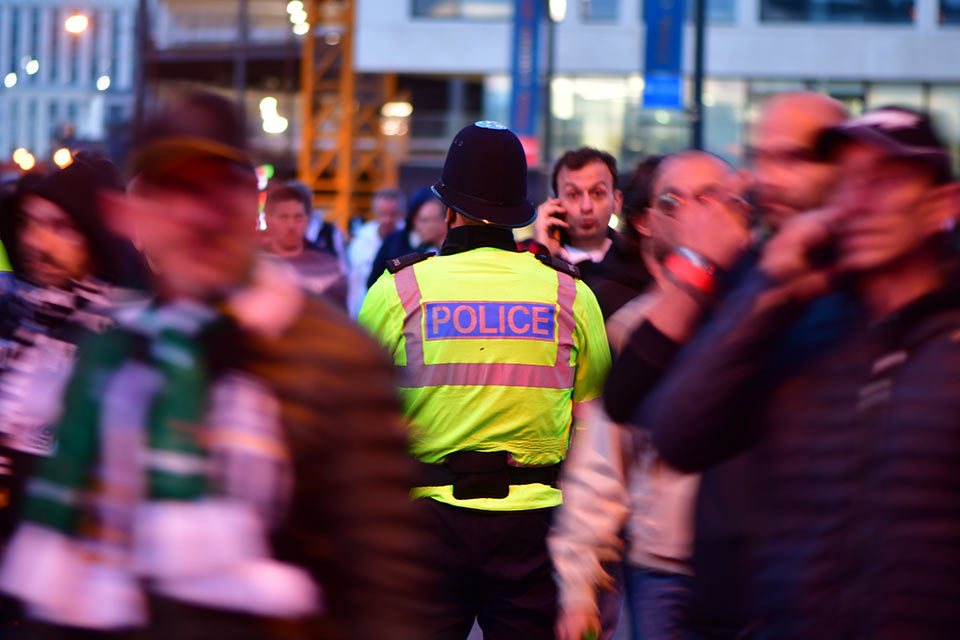 The aim is to support the development of a scientifically-derived understanding of efficient and effective policing responses to crowd events, to develop evidence based policy and operational practice. The team met for the first time recently to hold a two-day workshop at the University of Manchester. Here's what they had to say.

The first striking feature of our meeting was the sheer operational experience gathered in the room. Gold to Bronze Command levels, experience of protest and event policing as well as football policing from the Premiership to the lower leagues. Speakers came from Switzerland and Holland, reportage from Sweden and Denmark, renowned and leading academics and four PhD researchers. Football fans were robustly represented by the Football Supporters Federation.

Inevitably, given that type of audience, there was no shortage of opinion and passion for our subject. And that’s the second striking feature – just how quickly a group like this reached consensus that the current threats to events policing arise more from a counter terrorism dimension, and the subsequent need for contemporary event safety thinking and measures, than from crowd disorder and organised violence. In other words, more was said about making event spaces, arenas and football stadia safer through design and operational practice than was said about fighting ‘hooligans’, violent protestors and riot.

Our gathering was timely because, as we heard from the College of Policing, the changing nature of ‘risk’ within POPS (public order / public safety) policing is uppermost in their thinking as they search for better ways to understand and predict it. Enable UK can support the college in this regard. It follows then that police and event management thinking ought to reflect this new dimension. Here too there was consensus that the first and most effective tactical approach to do so is officer communication and dialogue, rather than rows of yellow-jacketed public order police infamous for their reluctance to engage and communicate with the public when brought together in a police PSU (Police Support Unit). A few said the PSU tactic was outdated, but everyone acknowledged it was time now to understand this phenomenon of poor communication through ENABLE UK and explore how to change the officer communication dynamic in events policing.

This then is the starting point, an exploration of the processes influencing risk assessment and management in POPS policing, and understanding what prevents officers from engaging with a crowd when they so readily communicate in every other context. Whatever the cause of the poor communication, the effect is most keenly felt in the match day experiences of fans.

Above, Owen asks what prevents officers talking to football fans. Well here’s a few of my thoughts on that issue. Of course it is not all cops we are talking about, some are fantastic at chatting to and dealing with fans but a larger number aren’t. On a match day, too many cops give the impression they’d rather be on duty elsewhere. Even smiling and saying hello seems like an effort. And this is a great shame for several reasons because a football match is, when all is said and done, a community event.

How many other professionals get the chance to be out among their constituents two or three times a month? The near death of community policing is mourned by police and public alike and yet when the opportunity to police a community is, literally, served up on a plate, many cops don’t take advantage of it. I’ve attended a lot of pre-match briefings that, generally, I could not have written better myself. The message is talk to people and recognise that the clear majority are at the match for a good day out. Perhaps though a few lines need adding. Perhaps cops need reminding that first and foremost they’re not going to be policing football fans today but people from their local patch or visitors to it. The question should be posed - when does somebody stop being a person and become a football fan?

Officers should be told to see beyond the shirt or the scarf and see the person who is wearing it for what they are. A well-behaved, law-abiding person. Not ‘just a football fan’. We need the police to have more understanding of fan culture and legitimacy. Fewer assumptions and suspicions are directed at groups often based on little more than stereotyping. Fans can be, and often are, treated as homogenous groups, particularly away fans and especially at the more ‘high risk’ games. Coercive tactics are imposed on large groups without efforts to distinguish “good” fans from “bad”.

The net result of such policing – even if it is vastly improved from a few years ago - can mean the loss of support from the very people who ordinarily or traditionally support the police. It may shape the views of younger fans about the police for many years to come. None of the above will be resolved with a smile and a hello. But that’s not a bad place to start, it costs nothing and isn’t difficult. It leaves a good impression. And perhaps more importantly from a policing perspective it gets fans – the local community - onside. Let’s hope then that ENABLE UK can genuinely help us to understand how to improve police communication with fans and others and I will be doing what I can to support this important initiative.