Blog | Knowledge co-production and the policing of football crowd violence 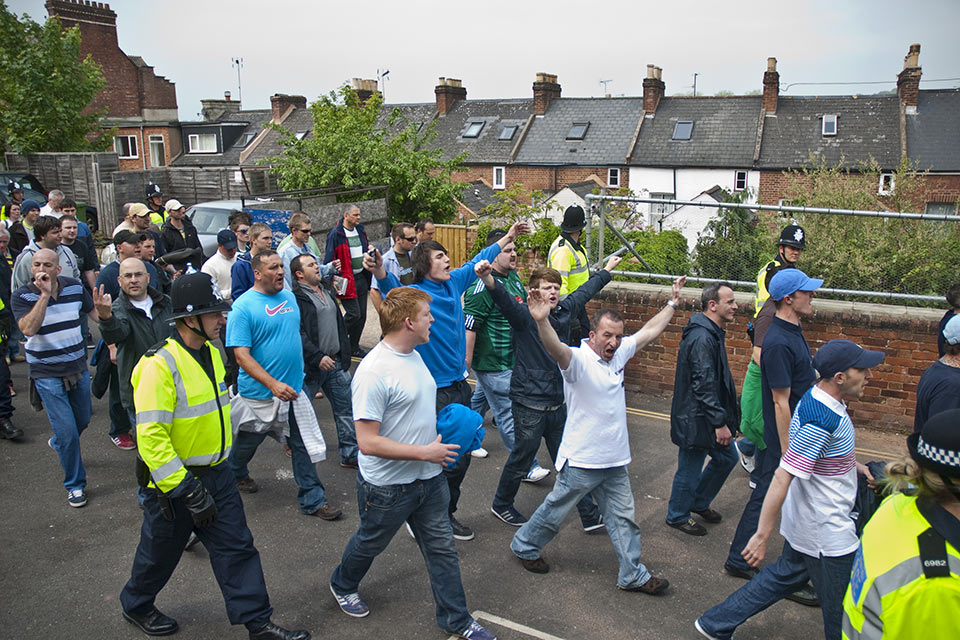 On 25 January 2017, Djurgården IFK (DIF) - one of Stockholm’s three major football clubs - played a friendly against Vasalund, a small club based in the Solna district of north Stockholm. Solna is the heartland of Allmänna Idrottsklubben or AIK, one of Stockholm’s other top flight football clubs, and to whom the notorious hooligan group the ‘Firman Boys’ are affiliated.  At the end of the fixture, as Djurgården fans filtered out from the stadium, they were attacked by a masked group who had not been at the match and who many have assumed were the ‘Firman Boys’.  Driven back into the stadium, fighting spilled over onto the pitch and was immediately picked up by the broadcast media, setting in motion news articles and growing fears that the forthcoming Swedish football season will be marred by the spectre of football ‘hooliganism’.

While on closer analysis it appears that there was a good deal of ‘media amplification’ surrounding this specific event, such fears about the increasing problems of ‘hooliganism’ in Swedish football are arguably well founded.  Indeed, in 2014 a DIF fan was killed during a violent altercation in the southern city of Helsingborg and across the 2015 and 2016 season there have been whole series of high profile incidents of violence and confrontation, indicating an increasing ‘radicalisation’ among certain sections of the Swedish fan base.  When combined with the safety concerns surrounding the widespread use of pyrotechnics by Swedish football fans there is an increasingly powerful realisation that Swedish Elite Football is facing somewhat of a crisis of crowd management and that action is needed.

The question is of course, not that action is necessary but what kind of action is required?

The need for the authorities to understand how to best manage potentially violent crowd events is not a challenge unique to Sweden, to football or indeed to our time.  Crowd theory itself has evolved from the 19th Century onward precisely to try to meet the ‘security’ challenges posed by crowd events.  But across the last few decades, considerable research and innovation has taken place at an international level that has been helping to advance both theory and practices as these relate to the policing of football crowds.  At the forefront of this has been a shift in theoretical perspective linked to the idea that football crowd violence is enabled by participants acting in terms of a social identity, identities which are themselves linked in both form and content to the historical dynamics of surrounding inter-group context. As such, conflict during football crowd events is never ‘mindless’ and can ironically, and somewhat counterintuitively, emerge and escalate from ‘heavy handed’ policing practices.

This shift in conceptual understanding of the ‘problem’ has had far reaching effects, reshaping policing practices, most notably at the major international UEFA football tournaments from 2004 onwards.  Such changes have, as the theory would predict, led to dramatic declines in the involvement of fans in major incidents of crowd violence at such competitions.  Nonetheless important questions remain.  For example, to what extent and how can this ‘social identity approach’, with its focus on policing, help to address the kinds of problems where few if any police are present and other groups so self-evidently initiate confrontation?

To address such powerful questions, it is important to confront some potential assumptions.

First, there is a need to challenge any simplistic ideas that theory alone should be able to understand and address all forms of collective violence in crowd events and that any failure to do so is evidence of the falsity of existing theory.  Research in this tradition has, since its inception, been focused on what can be defined as ‘reactive riots’, where crowd conflict has and does develop as a function of police use of force.  What is less clear is how the theoretical model needs to be advanced to also help understand the aetiology of what we are beginning to describe as ‘proactive rioting’, like that witnessed in Stockholm recently and in some forms of ‘rioting’ that we have identified through our ongoing ESRC funded research on the spread of the 2011 English riots.

Second, it needs to be understood that the production of new knowledge to meet these kinds of explanatory challenges has not and does not occur as some form of abstracted theory development by academics in isolation from other stakeholders.  The projects that led to the development of social identity approaches to football crowd management were conducted in partnership with participating policing, governmental and football organisations.  As such, the direction that the development of theory took was in part a reflection of the challenges being faced at the time by policing stakeholders themselves.  We should not be surprised then that as those policing challenges change so too does the direction of travel for theory development.

Third, the knowledge-led policing approaches that developed from the social identity approach have been steered by the police themselves.  Put simply, rather than relying upon arming and equipping the police to provide a ‘deterrence’ based response to ‘controlling’ crowds, this new theoretical knowledge has convinced police forces across the world to expand and empower their capacity to proactively facilitate and manage crowds through ‘non-coercive’ communication based forms of policing.  There can be no doubt that in so doing these police forces have created a series of occasions to de-escalate otherwise confrontational protest crowd situations, opportunities that otherwise simply would not have been there.

But such developments in knowledge coproduction are no panacea, while theory can currently explain a good deal, it will not explain all forms and incidents of crowd conflict.  That is not to say the theory is flawed rather that it requires further development to increase its existing explanatory power and utility.  Moreover, while these developments have been embraced to underpin the ‘dialogue based’ policing of protest crowd events there have been a series of extremely important issues about their extension and adaptation of the approach, particularly into the context of policing football.

For example, the only country to systematically implement a nationally coordinated ‘dialogue’ based policing approach to the policing of crowds in their domestic football league has been Denmark, and even here there have been issues surrounding that implementation.  Nonetheless, the levels of confrontation and associated arrests surrounding football fixtures in Denmark have been falling exponentially year on year since its implementation.  In contrast, in Sweden the ‘dialogue’ police, originally developed to support protest policing, were not applied to football policing until 2012, and then only within Stockholm.  They are not utilised in any of Sweden’s other major urban centres and as such the approach to supporter engagement lacks consistency and national coordination.  In the UK, police ‘liaison’ officers have been developed to provide a ‘dialogue’ capability in policing protests but have currently only been trialled and utilised in a piecemeal fashion for the policing of football crowds.

So, at this stage the ability of this knowledge-led ‘dialogue’ based policing response to make any meaningful impact on domestic football ‘disorder’, particularly the kind of ‘proactive rioting’ witnessed in Sweden, remains relatively untried and untested in important ways.  Moreover, where these policing approaches are being developed, initial evidence does suggest that they can provide meaningful forms of conflict reduction and de-escalation, both in the immediate context of the crowd event and historically across locations and time.

The available research is thus highlighting that the problems are not just with theory.  It’s also clear that substantial organisational barriers stand in the way of ‘uptake’. In other words, it is not that the theory may or may not be valid, nor that the knowledge-based policing flowing from that theory may not meet the distinct challenges of football policing.  It is also the case that there is considerable scepticism about, lack of understanding of and sometimes even active resistance to knowledge-led approaches within police organisations.  As such, where they are introduced, they are being implemented incoherently and inconsistently, often at odds with how theory suggests they should be utilised, increasing the likelihood that they will not be effective.

The events like those in Stockholm pose fundamental challenges to current theoretical understanding and existing policing responses.  The way forward in terms of action has yet to be adequately understood.  But one thing is clear, in developing our roadmap we must remember that the success of the social identity approach in helping to understand and then meaningfully address forms of football crowd violence has come about through partnership.  Throughout its development and application, researchers and police officers worked together to foster the co-production of knowledge - that at first helped understand the contemporary policing challenges but then to also meaningfully and powerfully address them.  As the situation in Sweden and elsewhere demonstrate, we now need to continue to work together to extend our theory and practice.

It is in this spirit that the Keele Academic Policing Collaboration (KPAC) and the N8 Policing Research Partnership are providing a two day Continuing Professional Development Course in March 2017.  Across two days, the event hosts a series of speakers, both academics and police officers, who will be presenting on the latest evidence, theory and practice in the policing of crowd events.  In addition to myself, academic contributions will include keynotes from one of the most important and influential researchers and theorists of public order policing, Professor ‘Tank’ Waddington, as well as an international keynote from Professor Ed Maguire from Arizona State University, one of the leading researchers of public order policing in the USA.  Alongside these, there will be a range of inputs from highly experienced operational commanders and practitioners including Chief Superintendents Owen West (West Yorkshire Police) and Steve Neill (Northumbria Police, England Silver Euro 2016), Superintendents Steve Furnham (South Wales Police, Wales Silver Euro 2016), Nigel Goddard (PSNI Head of POPS, NI Silver Euro 2016) and Dave Charnock (Merseyside POPS lead).  It is hoped that the ideas and networks developed during the event will flow outward into new innovations and research opportunities that will ultimately play an important role in helping not just extend theoretical understanding of crowd conflicts but also help to develop a clearer understanding of the way forward in helping to prevent them.

The event takes place on the 14th and 15th March at Keele University.  For further details visit our event website or contact a.boardman@keele.ac.uk.