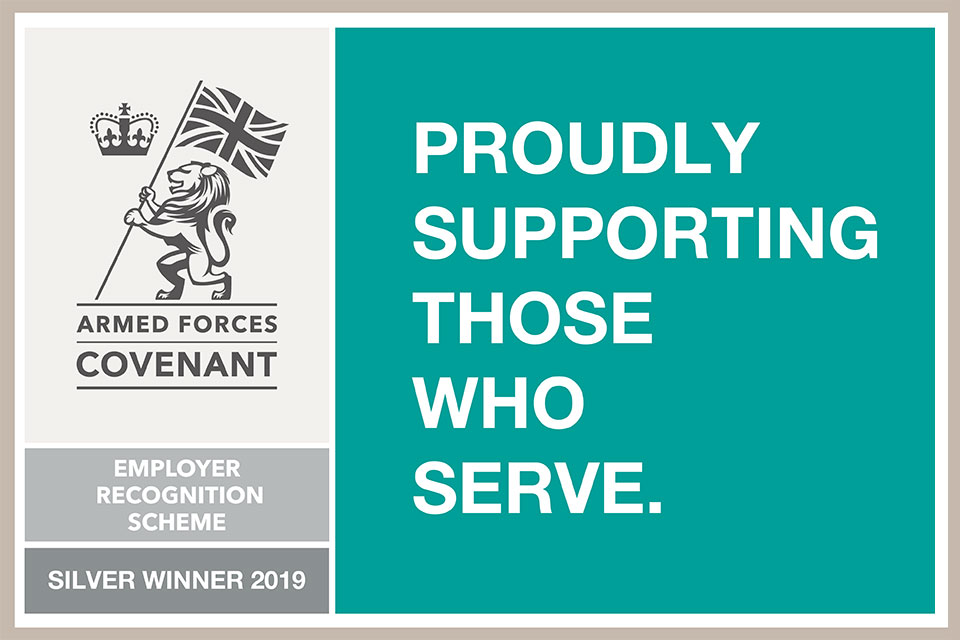 Keele University has received a Silver Employer Recognition Scheme award from the Ministry of Defence, in recognition of its work to support the armed forces community.

The Ministry of Defence Employer Recognition Scheme showcases employers who have signed the Armed Forces Covenant and are actively supporting the armed forces community, including those who serve, veterans, and their families.

Keele’s award recognises the University’s commitment to working with the Ministry of Defence, from employment policies which provide time off for public duties, to engaging with the University Officers Training Corps to explore the co-design of curricula that will mutually benefit the Armed Forces, University and students.

Terry Dray, Associate Director for Employability and Employer Engagement within the Keele Institute for Innovation and Teaching Excellence explained:

"The Armed Forces Covenant Employer Recognition Scheme was launched to reward employers who support Defence People objectives and encourage others to exhibit the same behaviours in supporting the Armed Forces family.

“Being awarded the Scheme Silver Award provides welcome recognition of Keele's commitment to our employees, to employment and career development and to Defence People objectives. The submission was managed by the Employability and Employer Engagement Team in KIITE and Human Resources and illustrates the value of cross-team working."

“These awards recognise the outstanding support for our armed forces from employers across Britain and I would like to thank and congratulate each and every one.

“Regardless of size, location or sector, employing ex-forces personnel is good for business and this year we have doubled the number of awards in recognition of the fantastic support they give.”

“Veterans make a huge contribution to businesses across the country and it’s fantastic to see a record breaking number of organisations recognised for their support.
“We’re working closely with businesses to help them further understand the huge value that veterans, reservists and military spouses can bring to their organisation.”

About Keele’s work with the Armed Forces

Keele University has launched a formal policy which provides time off for public duties, and which specifically entitles Reservists up to an additional 10 days’ paid leave per annum to enable them to attend training. The policy also states that in exceptional circumstances, where the standard allowance does not cover a reservist’s annual training requirements, and where operational/service requirements allow, consideration may be given to other means to enable the individual to attend, e.g. unpaid leave, re-arrangement of shifts, ability to make time up at a later point, annual leave, etc.

The University is also currently looking to undertake research work later this year on behalf of Landau Ltd and the British Royal Legion (BRL).