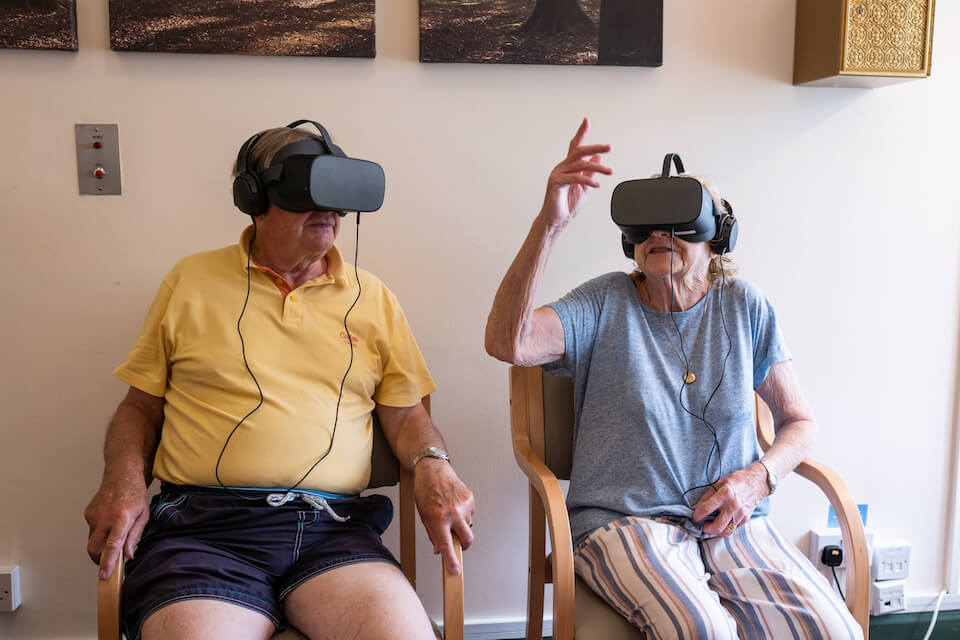 As featured on BBC News, over 75% of cancer patients involved in a study at Katharine House Hospice in Stafford say their mental health has been given a boost thanks to a virtual reality research project by a local filmmaker, in partnership with Keele University researchers.

Professor Saeed Farooq and Dr Rashi Negi from Keele’s School of Medicine and the Midlands Partnership Foundation NHS Trust have worked with Ben Malone, the owner of Project Vae, a non-profit community interest company, on a study where patients were able to ‘visit’ destinations across the world through the use of 360° videos and virtual reality headsets, from the comfort of their armchairs.

Over 75% said they felt improvements to their mental health and reported feeling less nervous, anxious or on edge after the trial.

The team now hope to build on the results of the Project Vae study by rolling it out on a larger scale and working towards improving the mental health and wellbeing of other patients within the care system.

The explorative study, funded by the National Lottery Community Fund, looked at whether utilising virtual reality technology to show hospice patients field trip style videos would lead to positive changes in their mental health and wellbeing.

The videos ranged from six to 24 minutes long and were filmed in a vlog- style manner to allow the participants to feel like they had a companion with them on the adventure, rather than just being shown static clips of a beautiful location. They were also given flight-like experiences connected to a drone during some of the videos, allowing the patients to see the landscapes from an aerial perspective.

The researchers evaluated the impact of the videos on the mental health of patients by having the participants complete a questionnaire on various aspects of their mental health before and after watching the videos.

Dr Rashi Negi, Honorary Senior Clinical Fellow, said: “I am delighted with the result that this study has achieved and truly believe that the potential uses of this technology are limitless. I am hoping that the next stages will be rolling out this technology in larger groups of patients at hospices but also in many other patient populations such as patients suffering with dementia and other mental health conditions such as depression and anxiety in care homes, in their own homes and on geriatric wards.

“This study perhaps has even more relevance for today and for the future, given the current Covid pandemic that unfortunately, has caused increases in anxiety, depression and social isolation. I am truly grateful to Ben for approaching us with this innovative idea and for his dedication and commitment to develop this idea further.”

Professor Farooq, Professor of Psychiatry and Public Mental Health, said: “It was truly exciting to use the virtual reality in the hospice and to see its wonderful impact in improving the mental health and well-being of hospice patients. Using 360° videos as virtual field trips for hospice patients is highly innovative. I am pleased to be part of this project and hope that this can be used in people living with other debilitating conditions and in situations where social interactions are limited such as lockdowns due to the pandemic.”

If you would like to see the trial conclusion video that features the best clips and interviews from the study click here.