Origin: a native of central and southern Europe, it was probably introduced to the UK by the Romans. It is now well and truly established; seeding freely - perhaps too freely for many conservationists - for it can edge out native species from natural habitats. 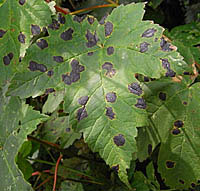 If allowed to grow freely it can become greatly domed with massive lower branches and in isolation can grow into a magnificent tree. Some people liken the shape to a head of broccoli! The bark is greyish to begin with but soon breaks up into squares which later curl up at the edges.

‌The leaves are five-lobed and dark green. The black spotting, which is often found on leaves later in the year, is characteristic of Sycamore. It is caused by the fungus Rhytisma acerinum or " tar spot" which seems only to attack only Sycamores. Autumn colour is poor, the leaves turning brown and dead-looking.

Fruit: it has a typical maple-type winged fruit but the angle between the two wings is about 90 degrees - unlike Norway Maple where the wings are almost in line.

Uses : having a very fine grain and the fact that it doesn't stain or taint food, it was popular for making kitchen surfaces and utensils, for textile rollers and it is popular with violin makers too.

Location : Widely spread around campus. A particularly nice tree can be found between Lennard-Jones labs and Visual Arts square J7, compartment 55a.