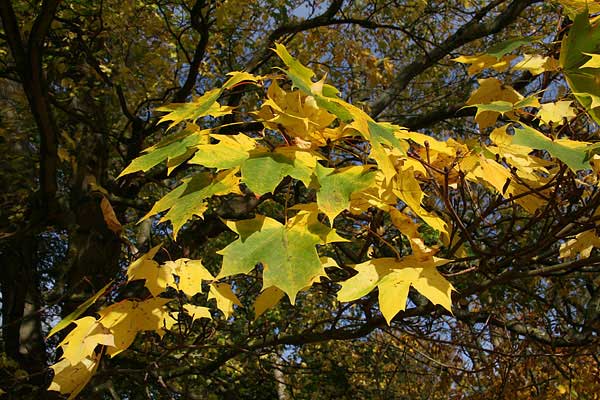 Origin: A native of Europe north to S. Sweden and southern tip of Norway; and the Caucasus, it was introduced to the UK in 1683 and is now widely planted.

The leaf has five lobes, each tipped with a thin filament when fresh. In autumn the colour is a pale yellow with some turning scarlet but most an orange-yellow. Like all maples the leaves are in opposite pairs on the stem BUT each pair is 90 degrees to the pair either side - this is termed opposite and decussate.Tree: It is a tall, domed, densely-leafed tree in summer with fruits persisting through the winter.

The bark is pale grey with, in younger trees, a network of thin, rather reddish-brown, longitudinal striations which develop into shallow ridges with age.

The fruits are yellowy-green with widely spread wings - almost horizontal (Sycamores tend to be more angled).

Location: Widely planted. It is the commonest tree within the ring road - its yellow colour in autumn making it stand out from other species.

Variety Schwedleri : This is variety has leaves that unfold bright pinkish-red and turn purple-tinged green in the summer. Several can be found by the Visual Arts building, compartment 56a; square J6; tags 147, 152, 162-164.