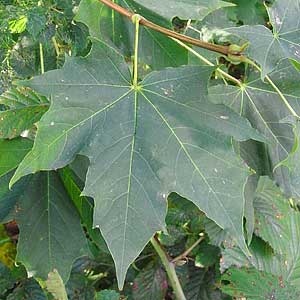 A native of eastern Canada to Georgia, USA, it was introduced to the UK in 1735. It is the leaf depicted on the Canadian flag and the tree most often used as a source of maple syrup.

It grows to 25m and is very similar in appearance to the Norway Maple. The leaves are deciduous, 8-15 cm long and the same in width with five palmate lobes. The basal lobes are relatively small, while the upper lobes are larger and deeply notched.The tips of the main lobes of fresh leaves have whiskers whereas on Norway Maple, all lobes and teeth have them. The lobes also tend to be more triangular; those of Norway Maple squarish. The leaves can also be variably hairy while those of Norway Maple only have hairs in the vein axils beneath. If you squeeze the leaf petiole, the sap that comes out is clear while it is white in Norway Maple.

The bark of older trees is rather "shaggy" compared to the finely grooved bark of Norway Maple.

Location : One in the Special Collection below the Walled Garden; compartment 24; square K10.