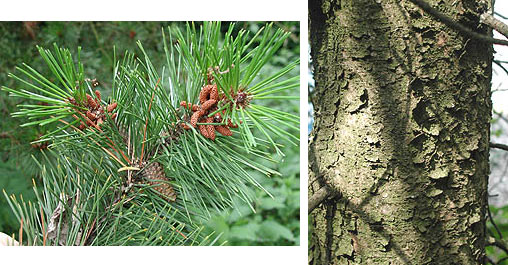 Origin: This is a native of North America from N. California to Alaska. It is the inland form of the Shore Pine Pinus contorta var. contorta and is uncommon in collections but is grown as a forestry tree on higher moorlands.

Bark: the bark is a rich brown, breaking into large plates with age but giving a "flakey" appearance on younger trees.

Leaves: like the Scots and Corsican Pines it is a two-needle pine ie. the needles are in pairs. It differs in that the needles are bright green and rather dense around the branch.

Fruit: the conical-oval cones are tough and may persist on the tree for several years before opening.

Uses: its tolerance of poor soils makes it a useful timber crop. The wood is used for roofing, flooring, chipboard and paper pulp.

Location : There is a row of trees between the road to the Observatory and the car-park, square O7, compartment 61a.