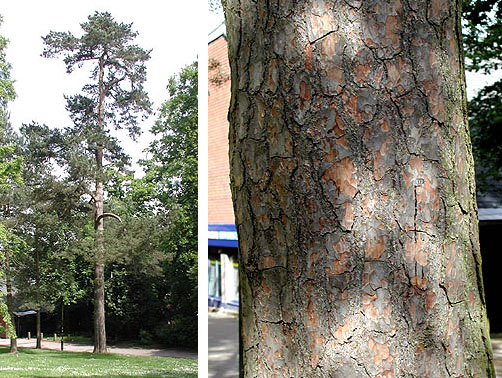 Origin: Scots Pine is one of only three native conifers, the others being Yew and Juniper. In its native state it is now confined to the Caledonian pinewoods of Scotland. However, it is wideley planted and grows well on the sandy heaths of England.

The bark is orangey and splits into small plates on older trees. Straight trunks are unusual and there is normally a "kink" in it, making it unsuitable for obtaining long lengths of timber. 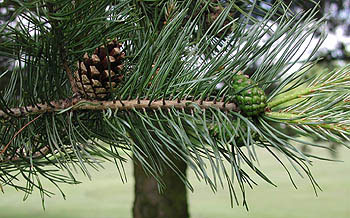 It belongs to the group of Pinus species whose needles are in pairs (other pines have needles in threes or fives). The needles are bluish-green, 5-7 cm long and often twisted.

As with other two-needle pines, the cones are rather small and tough, green at first and turning brown the following year.

Uses: in the past it was used for ships masts, as a source of turpentine and for charcoal. Today it is used for pit props, furniture, building, fences, telegraph poles and paper pulp.

Location : There are a number of trees in planted belts but the easiest to see are in front of the Library - compartment 30c, square M8.