Origin: A native of the limestone areas of the Wye Valley and southern Yorkshire. It is a common street tree and is frequently planted in parks and gardens. It has a distinct advantage over Common Lime in that it doesn't attract aphids!

The bark is dull grey and becomes fissured and ridged with age. Unlike Common Lime it doesn't get the basal sprouts and shoots. 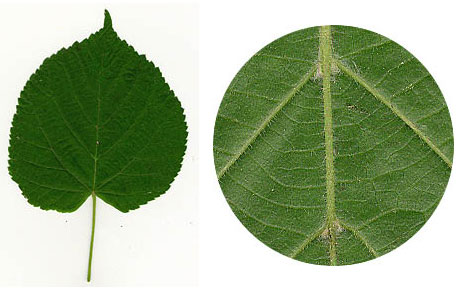 The leaves are markedly hairy above and hairy on the veins beneath; unlike Common Lime and Small-leaved Lime which are glabrous. This tends to deter the aphids that so plague the Common Lime.

The underside of the leaf has small tufts of whitish hairs in the axils of the veins.

Flowers and fruit: it is generally the first lime to flower. The fruits are globose, subtended by a large pale bract, densely hairy and strongly ribbed - those of Small-leaved Lime are smooth and of Common Lime faintly ribbed.

Generally, if you see a lime on campus with a trunk devoid of any basal shoots or suckers, then it could well be a Large-leaved Lime (see photo above left).