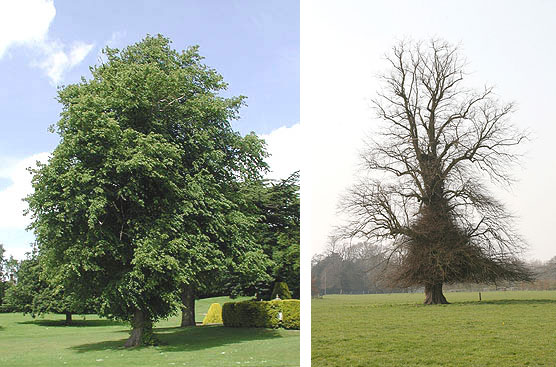 Origin: Common Lime is a naturally occurring hybrid between two native species; Large-leafed Lime and Small-leafed Lime. It is abundant, especially as a street tree, and in parks and gardens.

Tree: it makes a magnificent specimen but it has a number of drawbacks. Firstly it suckers profusely from the base of the trunk, making it look untidy and secondly, it is highly attractive to aphids, the sugary secretion from which rains down on anything beneath. For that reason it is unfortunate that it is planted so frequently as a street tree. It would be better to use which, because of its hairy leaves, does not attract aphids. It also doesn't produce the basal shoots.

‌The bark is a dull grey, with a network of shallow ridges; often with large burs at the base where it can be densely sprout-infested. 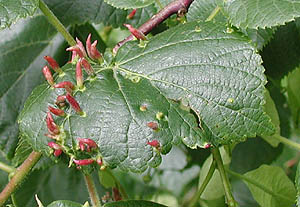 The leaves can be very large, almost heart-shaped and quite bare or glabrous except for small tufts of white hairs in the axils of the leaf veins on the underside.

The leaves of Small-leafed Lime have tufts of orange hairs and those of the Large-leafed Lime are hairy all over.

‌The surface of the leaves are often covered in small, reddish, conical warts or Nail Galls (formed by a small mite Eriophyes tiliae) - the other two species don't seem to get these as frequently. In autumn the leaves turn pale yellow.

The buds are characteristic in that the two bud scales are unequal in size, the smaller looking like a thumb on a mitten!

The fruits are broadly oval, hairy and with slight ridges.

Uses : it can be coppiced and used as fuel, hop-poles, bean-sticks, bowls etc. It is mainly used as an ornamental tree in large parks or estates. Avenues of lime are common, like thhose at Keele, and were widely plantedT. he fibrous layer of under-bark called ‘bast’ can be twisted into ropes or used to make sandals. The leaves were also useful as fodder for livestock and many trees on estates show a distinct grazing line.

Location : very common. Lines the approach to the campus from Keele village and runs parallel to the Newcastle entrance.