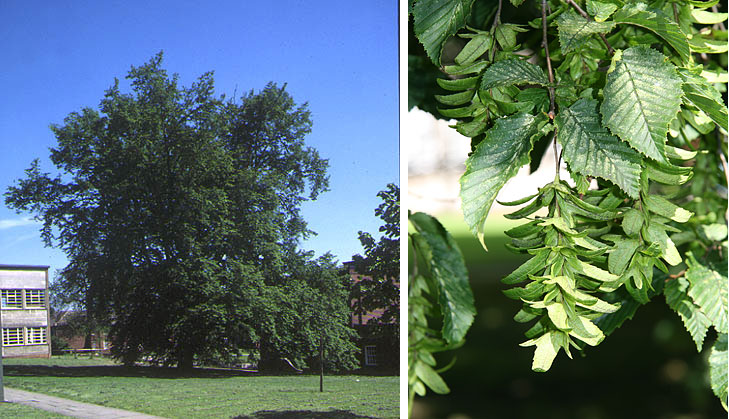 Origin: a native of SE England, it is a frequent hedgerow tree as well as forming pure stands in some forests. Here in Staffordshire it is not too common with only a scattered distribution.

The tree: in shape, younger trees are broadly conic but older trees can spread into a high dome (see above). The bark is lead-grey and smooth except for a network of diffuse stripes of paler grey or brown separated by darker fissures. The branches all tend to be very long giving the tree the look of a old-fashioned broom or besom.

The leaves can be mistaken for ; indeed both species are frequently planted as hedges; however, the leaves are finely double-toothed and have 15 pairs of rather prominent veins whereas those of the Beech are smooth and un-toothed. 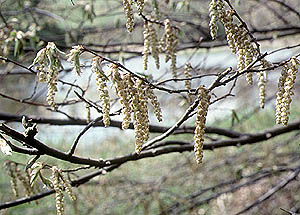 Fruit: the distinctive fruits consists of a cluster of eight pairs on nutlets - looking like Chinese lanterns - see above.

Uses: Next to Box it is the hardest of native woods and as such was used in the past for ox-yokes, cog wheels for water and wind mills and for piano keys. It also used to be coppiced to provide poles. Today it is planted mainly for ornament and hedging.

It is more commonly met with as the form "Fastigiata" (photo below) which, because of its conical habit, is frequently planted along roadsides.

Location : The tree illustrated above can be found outside the Hornbeam building; square L7, compartment 41. It is probably the finest example in North Staffordshire, if not the county. It is said that Prof. Beaver had the plans for the building altered to accommodate the tree! 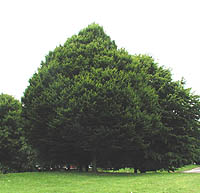 Fastigate forms, like the one on the left,  have been planted between Keele Hall car-park and Horwood.