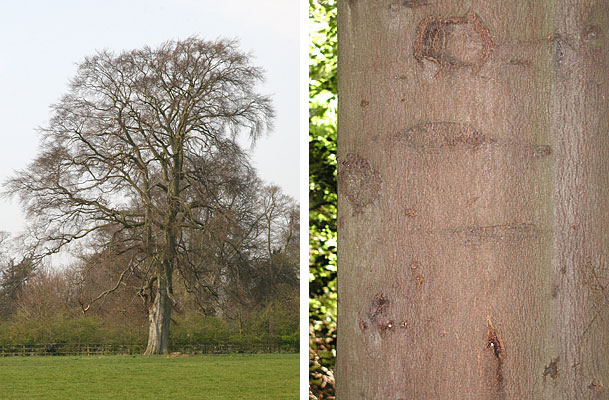 Origin: Beech is a native tree within England, but it is widely planted beyond. As a common native it is more abundant in the south of the country where it grows on free-draining soils on either chalk or on acid sands. 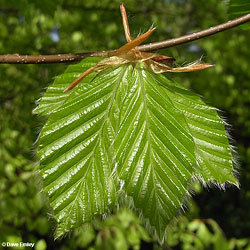 The bud is long, slender and pointed and is really only confused with that of Hornbeam.

‌The leaves are smooth, slightly toothed and with 6-7 pairs of veins. They are fresh, pale green and with sliky hairs round the edges to start with, becoming darker and shiny above with age.

Again, Hornbeam can cause confusion but it is more toothed at the edge, duller and rougher on top. The leaf canopy is so dense that few plants will grow beneath.

The autumn colours of Beech are superb; some leaves can remain on the tree throughout the winter months - this is especially so when Beech is used for hedging.

The flowers emerge with the leaves, generally in May.

The fruit is the familiar Beech nut which is contained in a spiny casing or involucre that splits in the autumn to release the triangular nuts.

Collectively the term "mast" is used for the fruits and, when on the ground, it forms an important food source for birds, especially finches. In past times, pigs were allowed to forage in Beech woods for the nuts in the same way that they foraged in oak woods for acorns.

Uses: being fine-grained and easily turned it is ideal for furniture making, especially chairs. In the past it was used for rifle butts, brush backs and shoe heels.

Unfortunately, while Beech forms a magnificent tree, it can rot from the inside and become dangerous.

Location : there are a number of large trees scattered around the campus.