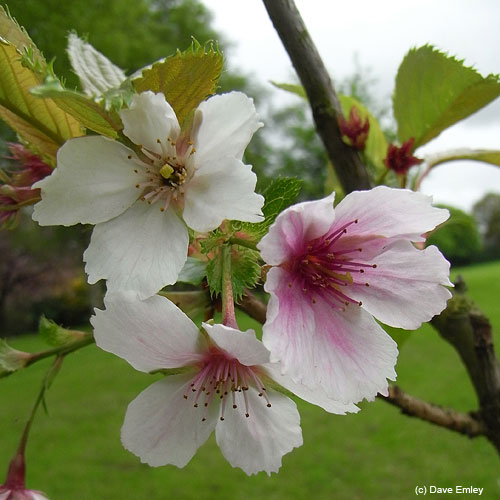 Named after a hillside in Kyoto City famous for cherries between c13 and c16 but now built over.

It is an old cultivar named after the above described first in 1681; it was exported from the late c.19 until the 1930s.

The single white flowers, faintly flushed pink in bud, 4-4.5 cm dia in clusters of 3-4 on short stalks are fragrant with 5-8 petals and one pistil and are produced freely. The flowering season is from mid to late April. It has a healthy vigorous robust growth forming an umbrella-shaped tree to 10m high and c.15m wide.

Young foliage is light brownish or brownish-green, appearing at the same time as the flowers.  The autumn colours are rich yellow. It is surpassed by Prunus 'Tai-haku'.