All about flowering cherries

W.J. Bean in his famous five-volume book Trees and Shrubs Hardy in the British Isles states that no other genus of trees contributes so much spring beauty to English gardens as Prunus.  This genus includes almonds, peaches and plums, but most notably the cherries; all of which are members of the Rose family or Rosaceae.

Members of the Rosaceae are distinguished by having 5 sepals (or budscales), 5 petals, a central stigma and numerous stamens. 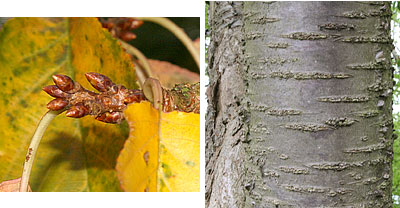 Cherries are distinguished from other trees by having clusters of buds at the ends of the twigs (only oak also has this feature) and usually a smooth bark with more or less regularly placed rougher lines running part or all the way round the trunk. These are the lenticels, loose corky areas that allow gasses into and out of the trunk - see photo opposite.  In the autumn they may also have cherries, of course, and usually superb colours!

There are almost 50 different cherry species that can be grown in Britain including evergreen species such as the cherry laurel (Prunus laurocerasus) and the Portugal laurel (Prunus lusitanica).  We also have two native species: in the south the wild cherry or gean (Prunus avium) and in the north the bird cherry (Prunus padus).

The wild cherry has clusters of  white  flowers coming from the same point (like edible cherries bought in the shops) while the bird cherry  has the white flowers in long spikes that branch off a central hanging stalk.

Of all the cherries grown, the Japanese garden cherries (the Sato Sakura, literally ‘domestic cherries’) are usually the most treasured.  These have been mostly bred in Japanese gardens for centuries and their precise original species has often been lost over time, so many are just referred to by their cultivated variety (cultivar) name, such as Prunus ‘Accolade’.

They are usually grafted onto Prunus avium rootstocks to aid their vigour.  These cherries vary tremendously in the colour, size and display of their flowers.  They also vary from large flat topped trees when mature (e.g. Prunus ‘Shirofugen’) through to smaller more bushy shrubs such as the various Prunus incisa cultivars.

Ornamental cherries usually live for no more than 50 years on the campus and so we are in the process of adding new cherries to replace those planted when the University was founded.

The colour of petals too is very variable with the colour of the same flower changing from first emergence, through maturity to blossom fall. The weather conditions can also affect the colour. All cherry flowers are darker in bud, becoming paler or lighter as they expand.

Occasionally you may find pink and white flowers on the same tree! Often this occurs when a branch starts to grow from the original Prunus avium rootstock. As the rootstock is stronger and more vigorous than the cultivar that is grafted on to it, this branch may outgrow and even cause the death, of the grafted cultivar.

Most of the flowering cherries at Keele originated in Japan where cherries have been cultivated for a thousand years or more.. They will thus have Japanese names. These names often have highly involved historical, literary or poetical back stories. However, the pride of our collection are The Matsumae Cherries - a group of cherries raised some 50 years ago in Hokkaido by Mr Matasochi Asari around Matsumae City - which are some of the most spectacular of all. Their names are nearly all prefixed by 'Matsumae-'

Japanese cherry names can be purely descriptive; some phrases occur repeadedly. The use of the hyphen is often for ease of pronunciation. So we have Kojo= flight; no=of and mai=butterflies P. 'Kojo-no-mai' = Flight of Butterflies! Some of the commonest phrases are:

Information on Flowering Cherries is scattered through the literature. Most gardening books only list a few of the commoner varieties. If you have other suggestions let us know and we will add them to the list.

In addition, a couple of specialist taxonomic publications from the USA have proved useful: