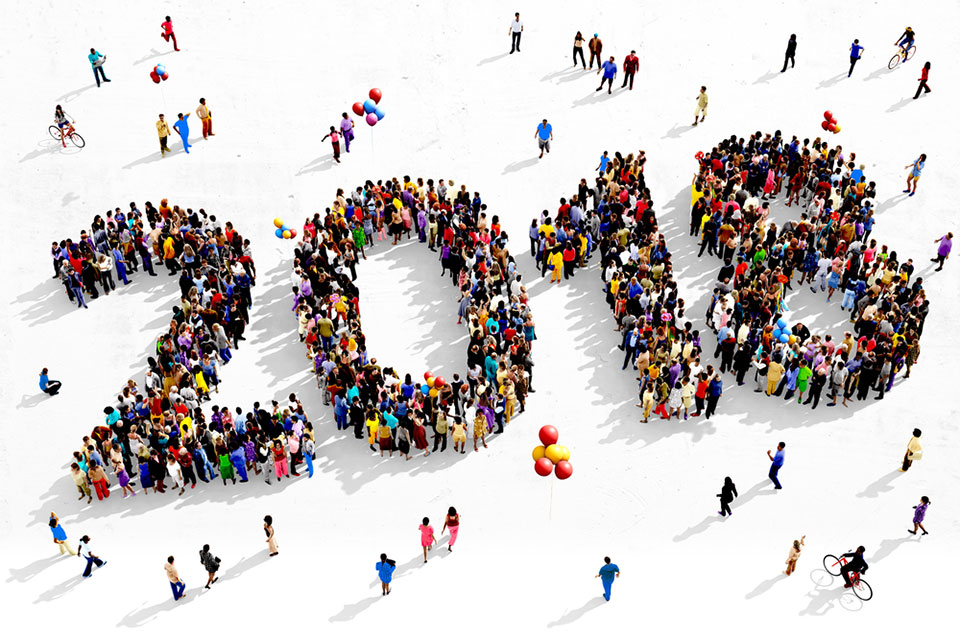 From headlines about sleep and heart disease, to the discovery of a pitch black planet, and new research about back pain and breast cancer treatments, Keele research has made global headlines this year.

Academics from Keele also shared their expert analysis this year on subjects including climate change, ocean plastics, national and international politics, human rights, and global health. With 75 live TV interviews, hundreds of radio interviews, and thousands of press articles, news from Keele reached 645 million people in total this year, a 30% increase on 2017. Read on for our news highlights for 2018.

We kicked off 2018 by celebrating the five Keele alumni and three honorary graduates who were recognised in the 2018 New Year Honours. We also had our first live Sky News interviews from our on-campus studio, with Dr Sharon George and Professor Robert Ladrech.

News highlights in January included the announcement of the SEND/Siemens partnership, and both Dr Pensee Wu’s research into premature birth and heart disease and Dr Adam Sharples’ research into muscle memory made global headlines. Dr Sharples’ research was also the number one science story on Reddit, driving  34,000 visitors to read the article on our own website. We also published 11 articles on The Conversation in January - a new record - including Dr Ralf Gertisser’s article about the volcanoes to watch in 2018, which was republished by dozens of outlets and read by over 200,000 people. 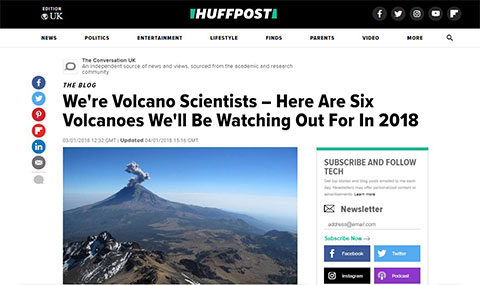 Highlights in February included announcements around our cutting-edge green energy HyDeploy project, and Dr Ben Anderson being named one of the BBC’s New Generation Thinkers for 2018. Dr Daniel Allen featured in several publications and broadcasts speaking about pet theft, Dr Awol Allo spoke about the political situation in Ethiopia, Dr Panos Sousounis shared his thoughts on consumer pricing of Valentine’s Day cards, and Professor Kurt Allman took part in a series of programmes about productivity for BBC Radio 4.

Research headlines included new insights into the heart of the Rosette nebula, and an ancient tree marking the beginning of the anthropocene. 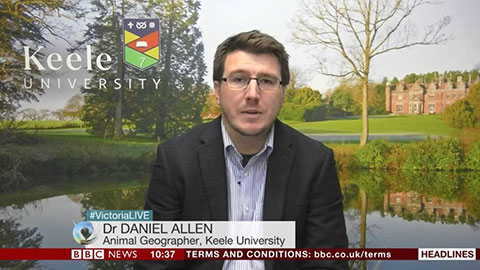 New research led by Professor Nadine Foster about low back pain made global headlines in March, featuring in broadcast, print and online news around the world. Dr Richard Waller dispelled various geographical myths in the national press, and Dr Matthew Wyman was interviewed six times, including on Sky News, about the Russian spy poisoning.

Highlights in April included coverage of new research by Keele’s Astrophysics Group, who discovered a ‘pitch black planet’, and which featured in New Scientist, IFL Science, and most national newspapers in the UK. Dr Sue Sherman’s new research on the HPV vaccine for boys featured on BBC West Midlands, whilst Dr Maria Tzanou shared her expertise around GDPR with hundreds of thousands of readers via an article in Gulf News. 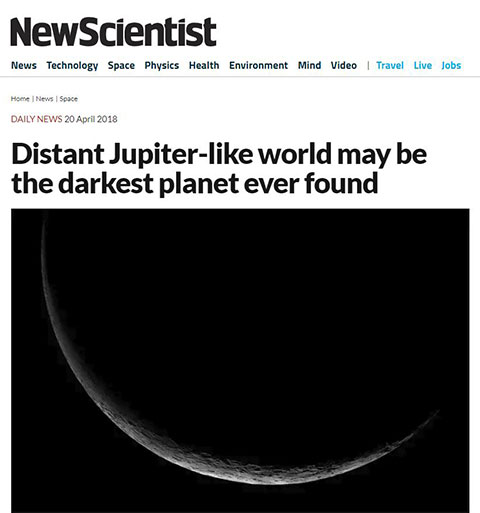 Discovery of a 'pitch-black planet' on New Scientist

A £2.7 million research programme seeking to personalise care for people with shoulder pain received coverage in the UK, whilst research which found that gout was not associated with increased fracture risk was published by many international outlets. 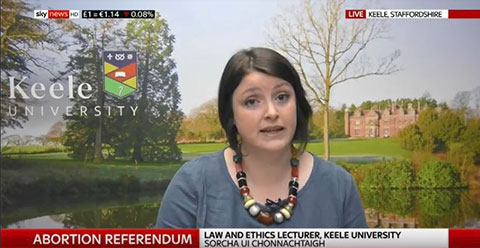 June was a record-breaking month for news at Keele, with over 200 broadcasts and over 500 press and online stories featuring news from Keele - reaching over 100 million in one month for the first time ever!

Research news highlights included international press coverage of research led by Professor Mamas Mamas into the link between marital status and heart disease. Professor Mamas gave several interviews from our campus studio, leading to over 100 broadcast mentions, and including an interview on BBC World News which was broadcast in over 200 countries. 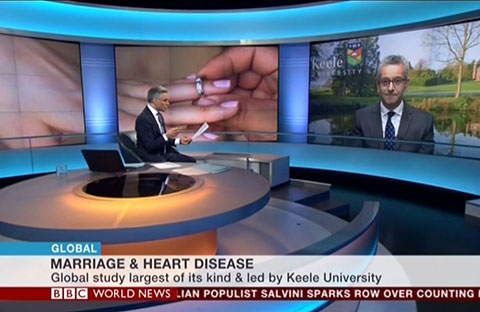 In July, Keele was once again named number one in England for overall student satisfaction in the National Student Survey - the fourth time that Keele University has been ranked number one of broad-based universities in the NSS.

Researchers from Keele presented their work on the quest for a life-like prosthetic hand at the Royal Society Summer Science Exhibition, featuring on ITV news and social media.

Dr Jan Hoole and Dr Dan Allen’s article for The Conversation about the dangers of leaving dogs in hot cars was republished in over 100 news outlets around the world, reaching an audience of millions. 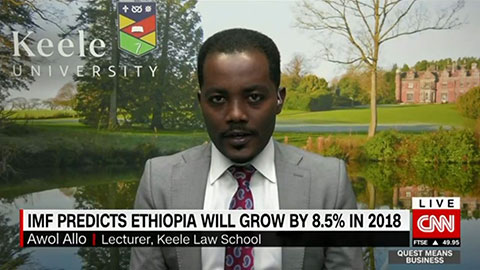 August saw global headlines about research into sleep and cardiovascular risk, led by Dr Chun Shing Kwok, who took part in several broadcast interviews. Dr Kwok’s research featured in over 470 outlets around the world, including prestigious interviews on the Today Programme on BBC Radio 4, Sky News, and all 39 local UK BBC radio stations. Headlines were also made with new research into gout and sleep apnoea.

Research led by Professor Carolyn Chew-Graham about burnout in doctors and the devastating consequences on the quality of care they deliver featured in 180 news articles in September.

Professor Toby Bruce and Dr Joe Roberts took part in a new film for Reuters about their search for sustainable solutions to stop the fall armyworm, which was syndicated globally.

Professor Murray Brunt’s research on breast cancer treatment featured in multiple news outlets in America and Europe, whilst research led by Professor Carolyn Chew-Graham about self-harm in older adults featured on BBC Breakfast, and was covered by national press. A study led by Professor Mamas Mamas about the widening North-South mortality gap featured on the front page of The Guardian. 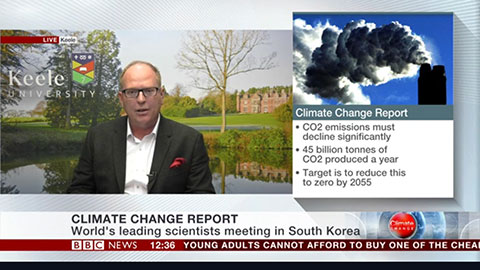 There were dozens of  interviews with Keele experts on television and radio this month, and  Keele students featured in the BBC Songs of Praise Gospel Choir of the Year final.

We were the third most-read university on The Conversation in November, across all 80 UK HEI members, with Keele articles being read over 500,000 times.

Dr Jon Parker was live on Sky News commenting on the US Midterm elections, and Dr Sharon George was live on BBC News from our on-campus TV studio. Dr Jamie Pringle was interviewed on BBC Midlands Today sharing his expertise on police forensics, whilst Dr Phil Catney was on BBC’s Sunday Politics explaining the basis for recall elections.

Dr Jan Hoole was also interviewed on BBC 5 Live discussing her recent Conversation article about why animals are afraid of fireworks, and how we can help them to stay safe -  Professor Rob Kirby’s article for The Conversation about the birth of plastic surgery in WW1 was one of their most-read for the month, with almost 200,000 readers. 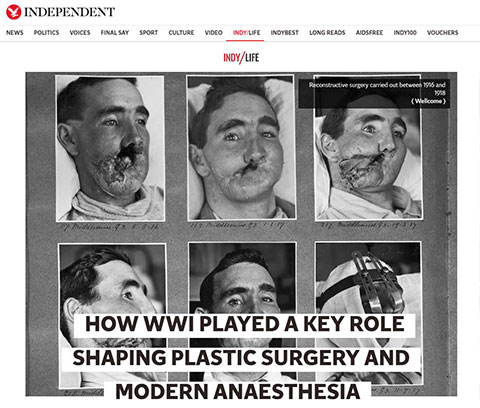 New research led by Professor Mamas Mamas, which found that patients with cancer have worse outcomes following a common heart procedure, featured in news outlets in the UK and America, whilst new research by Dr Richard Stephens about taboo hand gestures featured on regional BBC News.

Research from Keele University which has transformed back pain treatment was named as one of the UK’s 100 'Best Breakthroughs' for its significant impact on people’s everyday lives, in the Universities UK Made at Uni campaign. 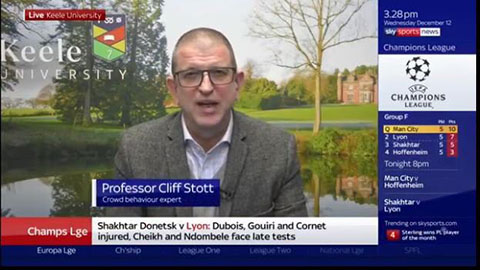