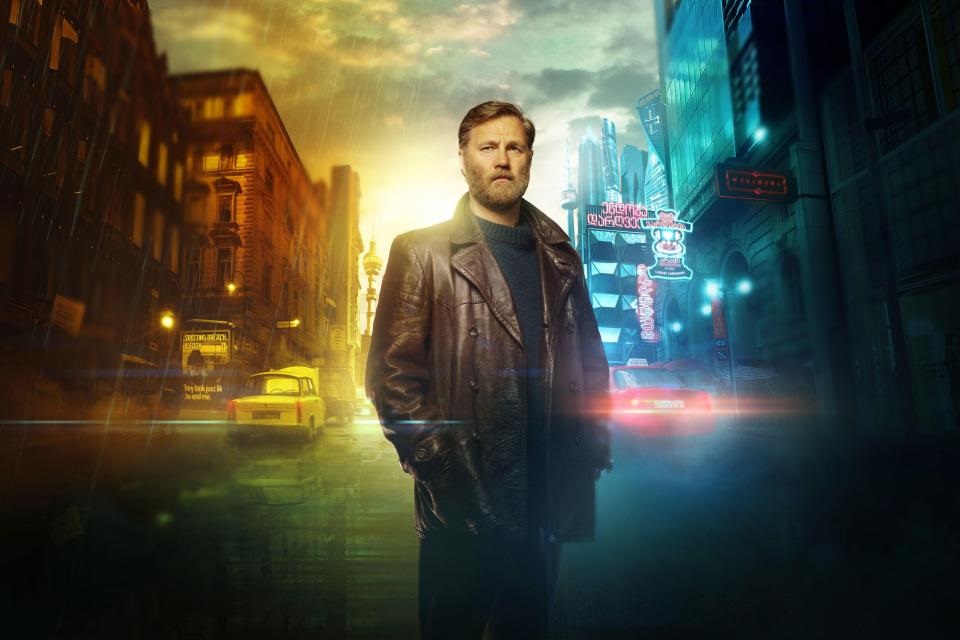 Dr Alison Long, Programme Director for Modern Languages at Keele University, has created a new language - Illitan - to be used in new BBC2 drama The City & The City.

The four-part series, which airs on April 6th at 9pm, is an adaptation of China Miéville’s novel of the same name. Adapted for television by Tony Grisoni and starring David Morrissey, the programme was filmed on location in Manchester and Liverpool. Dr Long will also be starring in episode two of the drama, playing Ul Qoma Newsreader.

Dr Long’s work in the Language Centre at Keele includes undergraduate modules and postgraduate courses in pronunciation and fluency improvement.

In this interview with the BBC, Dr Long shares how she went about creating a new language for the show:

What is your involvement with The City & The City?
I created the Illitan language (the language spoken in Ul Qoma). It started with a few lines of dialogue and some song lyrics and grew to include names for consumer brands, streets, people, menus, bands, background dialogue and other additions during filming.

How on earth do you go about creating a language?
Illitan is a usable language - it has grammar, spelling and pronunciation rules, and a vocabulary of around 1800 words. It had to sound like a recognisably human language - the book alludes to the two cities being in south-east Europe, so it has borrowings from other languages, things like 'restaurant' and 'vodka'. It has irregularities, just like any other living language. We decided to use the Georgian alphabet for the written form of Illitan, as it looks completely different to the one we use for English, and served to heighten the difference for Borlú in his new environment.

My starting point was China Miéville's novel. At the beginning of chapter five, there are three paragraphs describing the languages of Besźel and Ul Qoma, and there was one particular phrase - “jarring phonetics” - which meant I decided to take all the 'softer' sounds out of Illitan. I created the grammar rules first, as that’s my area, and many of them are borrowed from the Slavonic languages; like Russian, Illitan has no articles (the, a, an). However, some I simply created to try to emphasise a sense of 'otherness' from European languages - verbs are conjugated with a prefix, for example. I spent hours in front of the computer at home making weird noises to myself and applying some sort of structure to them. The most important thing - however 'correct' I wanted to be - was that the actors could physically say these lines and make them sound natural, and they did.

What inspired you on this particular project?
The chance to create a language is not one that comes along very often. I enjoyed the linguistic challenge, but I also loved the idea that it would actually be used and spoken. I’ve always been interested in literary adaptation, but had never really thought about what would happen if a language needed to make the transition from page to screen. I was very fortunate in the fact that I had a certain amount of freedom, as we do not see many words in Illitan in the novel, so it was left up to me. I enjoyed the novel and so wanted to make sure I got the language right for the author.

Is there a phrase or a word that you are particularly pleased with?
I had a lot of fun with the background dialogue, but I think the phrase that will stick in my head is “Ukrov lak Breachil” - “Trust in Breach”, purely because it is so central to the lives of all the citizens of Ul Qoma.

Once you have the words how do you teach the actors to speak them?
I made voice recordings for the actors as I couldn’t always be on set with them, so they could listen to those as often as they needed. I was on set for the days when the most Illitan was being used, and basically used the pronunciation techniques I use with language students at the university - I would draw diagrams to show them exactly where in the mouth the sound was being made, drill pronunciations with them, and make an exaggerated sound to help them better hear exactly what they needed to reproduce. Many of the actors using Illitan were from various countries in Europe, and therefore were already at least bilingual, which made it much easier for me to teach them as they were already used to speaking different languages.

Read the original article on the BBC Media Centre.