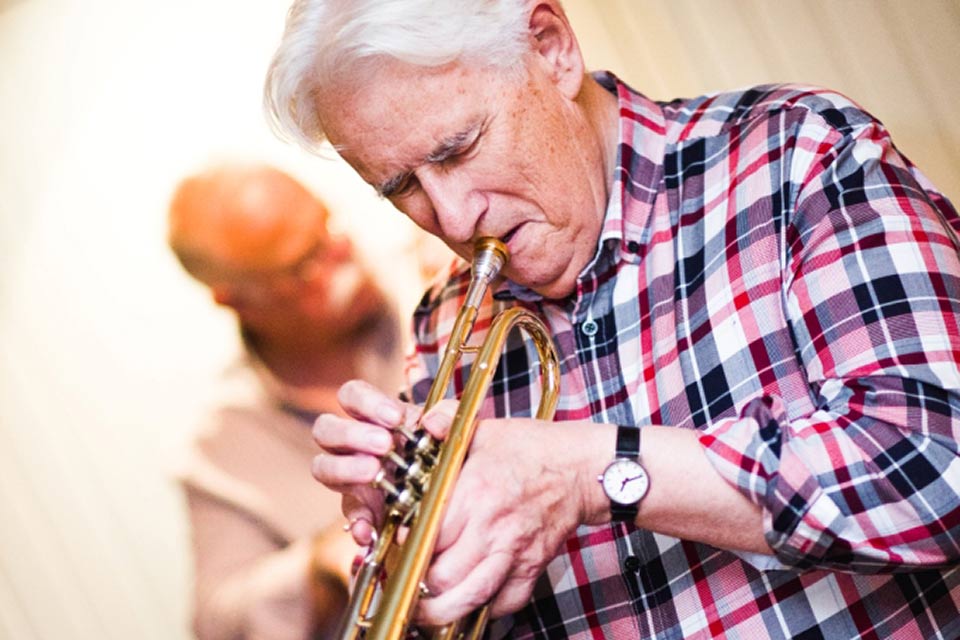 The 4th Live Age Festival held on 29th September at the New Vic Theatre and 1st October at Potteries Museum & Art Gallery was a tremendous success, with overwhelmingly positive feedback.

The Festival is now part of an all-year round programme called Meet Me at Live Age, funded by Arts Council England and Baring Foundation’s Celebrating Age Fund. The 2-year programme, led by the New Vic Theatre, in partnership with Keele and Age UK North Staffs, includes commissions for five artists per year who then work with groups that have applied to be involved. The artists also lead workshops at the Live Age Festival, giving the wider public the chance to have a go at the different creative opportunities on offer.

On Friday at the New Vic, festival-goers took part in workshops in animation and song-making. We were also delighted to welcome back Live Age Festival regulars Andy Barratt & the Company of Elders from the Royal Exchange Theatre in Manchester, who ran a workshop with around 30 participants. This was held in the auditorium and was followed by a performance poetry workshop with Leah Thorn. Leah recently completed a three month fellowship with the Institute of Liberal Arts and Sciences, working with Dr Dana Rosenfeld (Director, Keele Centre for Ageing Research) and Kerry Jones (Arts and Public Engagement Manager). This built on her groundbreaking ‘Older Women Rock’ project, which explores issues facing older women through poetry, retro clothes, performance and film.

The Live Age Conversation took place on Friday afternoon. The theme for this year was on Stoke-on-Trent’s bid to become UK City of Culture 2021, and the potential contribution of creative ageing. This proved a timely focus, given that the bid had been submitted that very day!  The conversation began with contributions from three excellent guest speakers: Claire Benjamin (Deputy Director, Education & Visitors, National Museums Liverpool); Dr Lesley Mountford (Director of Public Health for City of Stoke-on-Trent and practicing GP) and Deborah McAndrew (Playwright & Creative Director of CLAYBODY THEATRE). The discussions were chaired by Prof. David Amigoni, and supported by an engaging and thought provoking interactive performance from Ages & Stages Theatre Company.

The fun continued at the Potteries Museum & Art Gallery on Sunday 1st October (UK Older People’s Day), where highlights included workshops in choral song, dance and physical storytelling. There were performances from FRONTLINEdance, Staffordshire Poet Laureate Bert Flitcroft, and Fine & Dandy Jazz Band. There were also film screenings, including Keele Honorary Research Fellow John Shapcott in conversation with celebrated local author, 83 year old John Toft, as well as Back to the Drawing Board - a film by Dr Pawas Bisht, about designers Pat Albeck and Peter Rice and staying creative into later life. As well as all the contributions on the days of the festival, we were also grateful to Kate Malone, ceramic artist and judge on the BBC’s Great Pottery Throw Down, who recorded a special message for us in support of Live Age - below.

Live Age Linked Events continue throughout October. They include Leah Thorn’s exhibition ‘Older Women Rock the Potteries’ and the Ageing of British Gerontology exhibition – which features photography and film relating to a 2-year Leverhulme funded research project exploring the development of ageing research in Britain over the past 40-50 years. Both exhibitions take place in Keele University Art Gallery and run Thursday 19th October – Friday 17th November.

The Live Age Festival is co-ordinated by Isla Telford, working with Co-Directors Dr Jill Rezzano of the New Vic Theatre and Dr Jackie Reynolds (Public Engagement (with Research) Fellow) at Keele.  It originates in Ages & Stages research projects, led by Prof. Miriam Bernard, and illustrates some of the ways in which our academic research can make a real and lasting impact on people’s lives. More details of the festival can be found on the Live Age website. Please also follow us on Facebook and Twitter @LiveAgeFestival.