Ernest James Dalzell Warrillow was born in 1909 in Etruria, Stoke-on-Trent. He bought his first camera, a No 2 Box Brownie, in 1920 and joined the Sentinel newspaper in 1927 as a junior press photographer, where he worked until his retirement in 1974.

Warrillow also collected old photographs and engravings and his first book History of Etruria was published in 1950, followed a decade later by A Sociological History of Stoke-on-Trent. In 1967 he published Arnold Bennett and Stoke-on-Trent to mark the centenary of the novelist's birth, and in addition contributed articles to various magazines and wrote short stories for children. In 1964 Warrillow was awarded the MBE for service to the city of Stoke-on-Trent and later received an honorary MA from Keele. He died on 12th January 2000.

The Warrillow collection at Keele comprises over 1800 photographs of the Potteries area dating from the 1870s to the 1970s. The majority were taken by Warrillow himself and graphically record the changing landscape and people of the Potteries.

The camera used to take many of these photographs has now been donated to the Special Collections and Archives by Mr Alan Vickerman, Warrillow’s close friend and former colleague. Warrillow made his unique camera from brass plate, just large enough to hold 9x12cm glass slides, and fitted it with a rare 100mm front cell focussing GB-Kershaw 630 lens. The camera comes complete with its original custom-made carrying case, with space to house a small tripod, flash gun and a dozen glass slides.

The collection is indexed and copy prints, arranged alphabetically in albums, are available for consultation. 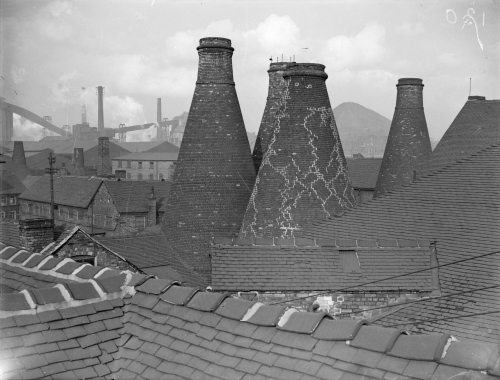