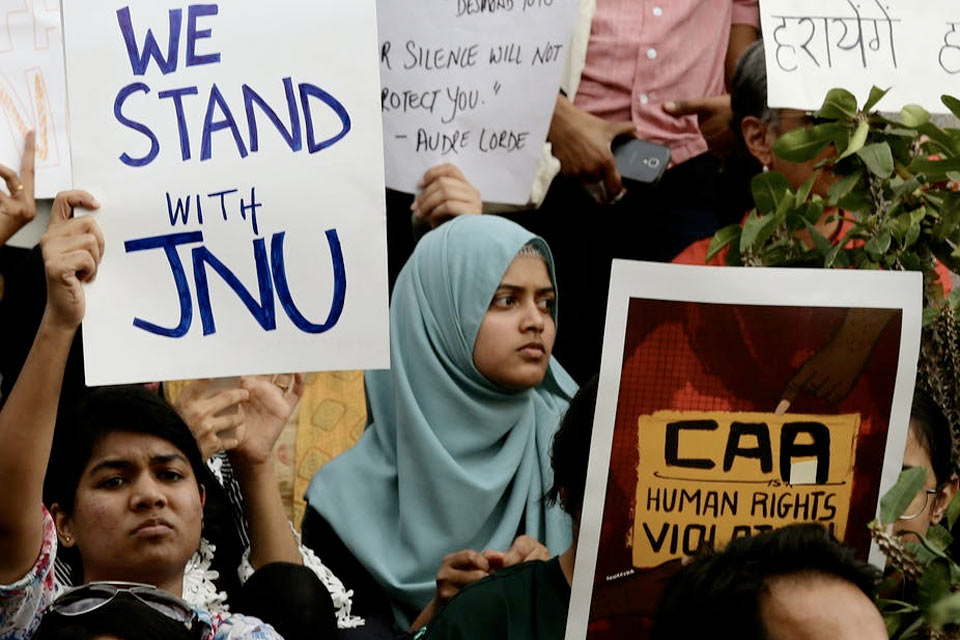 Students across India have protested against the attack by intruders at Jawaharlal Nehru University in New Delhi in early January. Jagadeesh NV/EPA

On a wintry Sunday evening in New Delhi, the gates of Jawaharlal Nehru University (JNU) were forcibly closed and a gang of masked intruders ran riot, stormed student accommodation, beat up students and lecturers, smashed cars and threw rocks for hours on end. The campus security stood by and the police waited for written permission from the university to enter the campus.

An investigation of the event on January 5 is ongoing. While condemning the violence, both the university authorities and the ruling Bharatiya Janata Party (BJP) party claimed that it was another instance of student unrest at a university long characterised as “anti-national” by the Hindu nationalist bigwigs ruling India.

JNU students have often been in the news, especially since the Hindu nationalist BJP, led by Prime Minister Narendra Modi, came to power in 2014. And as on many campuses across India, JNU students have recently been demonstrating against a new law – the Citizenship Amendment Act – that gives Indian citizenship to people of any persecuted minorities across South Asia as long as they aren’t Muslim.

But in early January, masked attackers specifically targeted JNU. What does this university and its community of students and teaching staff represent that the Hindu-nationalist government of India finds so threatening?

Set up in 1969, JNU was conceived at a unique moment in global academic history – something I’ve written about with JNU historian Rajat Datta for a forthcoming book about the radical campuses of the 1960s, edited by Jill Pellew and Miles Taylor, which grew out of series of conferences on the issue.

In the 1960s and 1970s, so-called utopian universities, which brought together staff and students in residential campuses, spawned new programmes of interdisciplinary teaching and research. Spreading from Sussex in the UK to Simon Fraser in Canada, and from Nanterre in Paris to Lusaka in Zambia, these new public universities were spaces which engaged with contemporary social problems. They were also experiments in communal living.

Students were drawn into this mission from the start. In 1973, student and staff representatives agreed that university admission policy would be worked out by a joint student faculty committee and not simply presented to the students union as a fait accompli.

The students union demanded that admissions at the university must satisfy certain criteria. There must be an expansion of numbers over time, regional parity in the allocation of places, weight given to academic merit, and positive discriminaton for applicants from “scheduled castes” and “scheduled tribes” in “accordance with the law”.

An innovative points-based admission policy followed, with applicants rated according to their family’s income, caste, region and gender. The university authorities fought back in the decades that followed, denouncing the “unfairness” of positive discrimination. But JNU students constantly tried to improve the admission policy to ensure that more students from deprived backgrounds were given the chance to gain admission.

There were both gains and setbacks. In the 1980s, the initial admissions points system was rolled back, though it was reinstated with extra provision for women applicants in 1993.

But since the BJP came to power in 2014, the university has once again been at the centre of a number of controversies. In 2016, JNU students were vilified as anti-national seditionists, their union president and others arrested on spurious grounds.

Since Mamidala Jagadesh Kumar was installed as the university’s vice-chancellor in 2016, students and staff claim they have been increasingly pushed out of consultations about the governance of the university. It was also decided that applicants for postgraduate courses were to be admitted to JNU only after a viva, despite fears that this could hinder the success of applicants from deprived groups.

Other measures introduced under Kumar have defiantly challenged JNU’s radicalism and independence. In 2017, he reportedly called for an army tank to be installed on the campus to “inspire nationalism”. A year later, university authorities dismantled the Gender Sensitisation Committee Against Sexual Harassment, a body that had given a number of women the confidence to file sexual harassment cases that had been held up as an example to change university procedures across the country since its inception in the late 1990s.

Matters came to ahead again in October 2019 when the university authorities announced a set of changes to campus accommodation rules. They introduced a dress code, established curfews, and hiked up fees for hostel accommodation, potentially making it much harder for the 40% of the student population who come from low and middle-income families to afford. This led students to strike, boycott exams and the enrolment for the new semester.

Students at the vanguard

The January 5 violence was an attack on the unrelenting resolve of JNU students to fight for affirmative action, a fair admissions policy and social justice. It has been successive waves of JNU students who have kept alive the utopian ideals of the university’s founders.

In the face of conflicts over admissions policy, the constant threat of the privatisation of education in India, and the increasing “saffronisation” of education in India to fall in line with Hindu nationalist ideology, JNU students have time and again upheld their interpretation of what it is to be a “national” university. If JNU retains any of its utopian nature, it is because of them.