Only Fools and Horses, Charles Dickens and the precariat, then and now 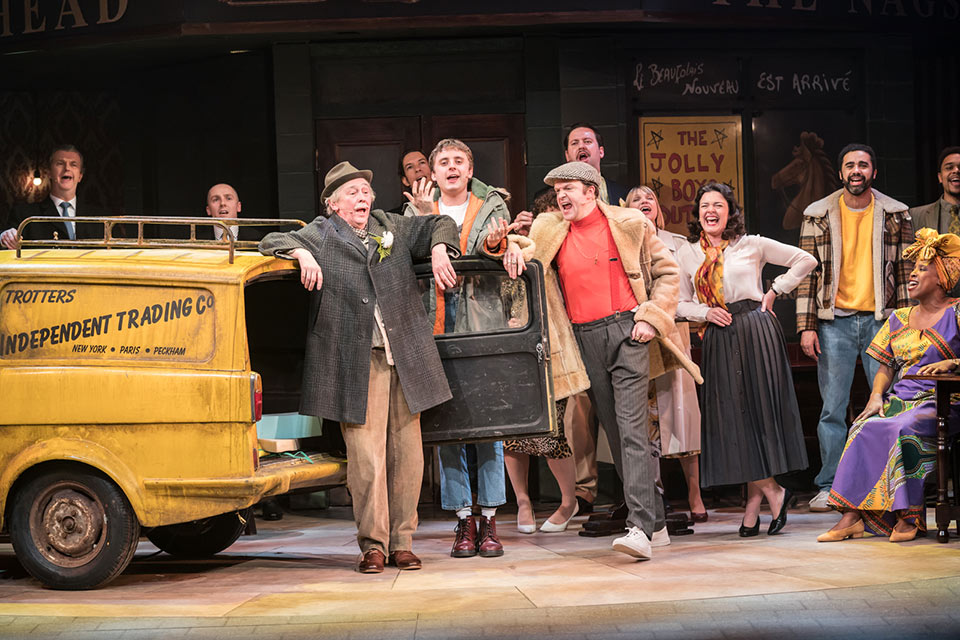 Publicity still for Only Fools and Horses. www.onlyfoolsmusical.com

It’s taken them 30 years, but Del Boy and Rodders have made it from Peckham to the West End. After three decades of ducking and weaving – getting by, making a fortune then losing it – the Trotter brothers from the late John Sullivan’s enduringly popular TV sitcom can now be seen in a musical version of Only Fools and Horses at the Theatre Royal, Haymarket. Based on Sullivan’s writing, his son has adapted the show along with one of its stars, the comedian Paul Whitehouse.

Journalists have had a great time, rediscovering the Derek Trotter lexicon for evaluating the world – the prospect of the show is, of course, “lovely jubbly”, or even “cushty”. There has been praise for the lovingly recreated stage sets of the flat in Nelson Mandela House, Peckham and the Nag’s Head where the brothers and their crew habitually used to drink.

Where the new show seems to score highly is in the mood of nostalgia that it serves, taking audiences back to the decade that both defined and thwarted Del Boy’s leisured millionaire desires: the 1980s – because (as mere “dipsticks” fail to grasp) only fools and horses work. Since the 1980s – and the first major deregulation of the British economy – we’ve developed a new vocabulary for describing the people who end up living in disadvantage: the “precariat”.

The most negative reaction to the new show involves the music: critics have tended to see some of the show’s songs as poor, bolt-on additions. This raises a question: will a musical adaptation dilute the topical edge explored by the original comedy?

Is it in danger of doing for the 21st-century precariat what Lionel Bart’s Oliver! (1960) did for the orphan pickpocket gangs of the mid-19th century on which Charles Dickens had based Oliver Twist (1837-8) – perhaps trivialising the very real problems they face?

The key figure for exploring this is Charles Dickens. When John Sullivan died in 2011, the head of BBC comedy, Mark Freeland, commented that “he was the Dickens of our generation”. Freeland was referring to Sullivan’s undoubted comic genius: it was on display when Del Boy famously fell through the bar, but also in countless instances of superb dialogue.

When it comes to Dickens, who is now thought of as a serious writer, we forget the extent to which, when he first came to prominence, he was a master comedy writer. Mr Pickwick and Sam Weller were the leading characters in Pickwick Papers (1836-37), Dickens’s first, breakthrough novel. But they were, in effect, a comic double act – getting into numerous scrapes and escapades as the Pickwick Club travelled around London and southern England (in stage coach rather than a yellow Robin Reliant).

The comparison is valid. In his second novel, Oliver Twist (1837-38), Dickens commented that his art was melodramatic, like layers of red and white in a side of streaky bacon, alternating comedy and tragedy. Then think of the way Sullivan’s could manage transitions of tone in Only Fools and Horses: in one episode, Grandad can have us in fits of laughter as a chandelier crashes to the floor (“A Touch of Glass”). In another, Grandad’s funeral (“Strained Relations”) can be an occasion for reflecting movingly on the complex emotional bonds of family life that shape love and loyalty while constraining opportunities.

Sullivan strongly identified with Dickens – as Graham McCann has shown in his book on the sources of Sullivan’s hit comedy, the author-to-be was introduced to Dickens as a demotivated secondary modern pupil who was being reared as “factory fodder”.

The attachment to Dickens was further emphasised in Sullivan’s creation (in 2000) of a comedy drama around the character of Wilkins Micawber, an unlikely hero of Dickens’ masterpiece David Copperfield – and a founding member of the precariat, predated only by Dickens’s debtor father and Dickens himself.

Debt in the early 19th century meant prison and the removal of social opportunity. Dickens’s own experience, being taken out of school and put to work in a blacking factory – recorded for the first time in John Forster’s posthumous biography (1872-74) – connects Dickens to precariats across the generations.

Only fools and writers

We are accustomed to seeing him as a powerful figure of status – but the early Victorian Dickens was struggling to make his way in a cut-throat world of the rapidly developing culture industries through a mixture of collaboration and intense individual competitiveness.

We think about Lionel Bart’s Oliver! as the leading musical adaptation of Oliver Twist but overlook the fact that when the novel first adapted for the stage in 1838, it was as a melodrama – Oliver Twist: Or, The Parish Boy’s Progress – at the Royal Surrey Theatre.

This melodrama, which mixed music with drama, enabled the controversial subject matter – pickpocket gangs, violent crime, prostitution – to get around the strict codes of theatre regulation that had been in place since the middle of the 18th century. In her brilliant fictional recreation of the event in her neo-Victorian novel, Fingersmith (2002), Sarah Waters portrays little Sue Trinder, a new member of Mrs Sucksby’s pickpocket gang, being taken along to view the lurid performance. And so the spectacle of Oliver Twist is returned to, among others, those precariously positioned communities whose experiences Dickens had written about.

In a recent piece for The Guardian, Stuart Jeffries reflected on the way in which the original TV Only Fools and Horses has become a surprising hit among BAME viewers, for the way in which it resonated closely with their experiences of communal laughter amidst precarious economic living. The challenge for Only Fools and Horses the Musical will be to open its West End doors to these communities to avoid it merely becoming a post-Brexit nostalgia trip – now that would hardly be cushty.