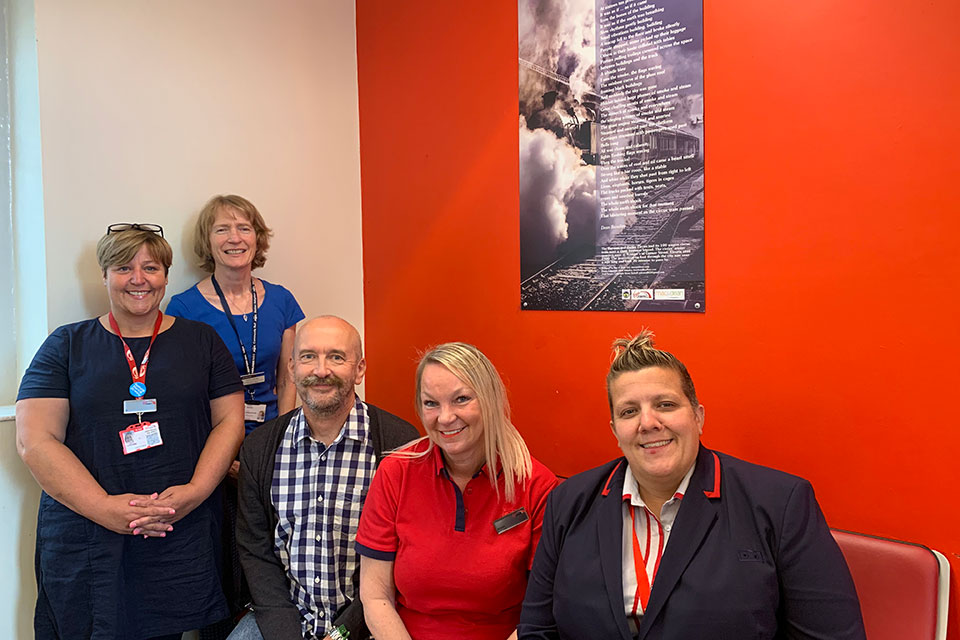 A student on Keele’s creative writing postgraduate course has spoken of his joy at having his work immortalised at a local railway station.

Circus Train, a poem written by MA Creative Writing student Dean Brindley, has been printed on a metal poster which has gone on display in a waiting room at Stoke-on-Trent railway station.

The poem is one of 15 poetry works featured in Dean’s creative writing collection, written as part of his MA course.

The collection, titled ‘Buffalo Bill and the London Road Elephant’, is based on stories, characters and events from the Victorian and Edwardian periods which took place in Dean’s home district of Boothen in Stoke-on-Trent.

Circus Train tells the story of the Barnum and Bailey Circus and its 100 wagon circus train, which was a show business legend which regularly used Stoke-on-Trent Station.

The circus’ winter quarters were at the Wenger’s factory at Garner Street, Etruria, until 1900, and the procession on foot through the city was a mile long and took 20 minutes to pass by.

The poem was read by Claire Sandys, the North Staffordshire Community Rail Partnership Officer, who then had the idea to have it printed on a metal poster for the northbound waiting room at Stoke-on-Trent station, where the events of the poem take place.

The poster also features a stunning photograph of a steam train taken by Henry Kelsall, a volunteer at Rudyard Lake Steam Railway.

Dean said: “I approached my friend Henry Kelsall from Stoke-on-Trent and he agreed to allow me to use one of his train photographs for the poster.

“I then designed the poster with my business partner Mac Austin and it had to be approved by Virgin Trains - which thankfully it was.”

He added: “The MA in Creative Writing at Keele has really helped me to develop my personal poetry style. I’d like to say a big thank you to Jim Sheard and Deborah Alma for their help and support and to Claire Sandys for making the poetry poster happen.”

Claire Sandys, Community Rail Partnership Officer for the Crewe – Derby Line, said: “The role of the North Staffs Community Rail Partnership is to connect communities with their local stations. Dean’s poem is a very good example of how a local resident has used his research and writing skills to introduce station users to a part of Stoke’s rich heritage that many will be unfamiliar with.”

Mark Taylor, Virgin Trains Station Manager at Stoke-on-Trent, added: “Virgin Trains has been proud to serve Stoke-on-Trent for over 22 years. It’s a great city I thought I knew well but I was amazed to discover this part of our railway heritage which is brought to life in Dean’s poem, Circus Train.

“We work hard to champion the cities, towns and local communities we serve and we’re delighted to present this piece of work which reveals an unusual part of Stoke-on-Trent’s history to the thousands of people who travel through the station every week.”