Lego is going to make start making toys from plant-based plastic. In an effort to become more sustainable, the Danish company announced plans to make tiny plastic trees and bushes for its playsets using ethanol extracted from Brazilian sugarcane. Yet while this looks like a forward thinking move, these toys represent just a tiny proportion of Lego’s overall production. And, what’s more, plastic made from plants really isn’t that sustainable.

Sugarcane plastic may not comes from fossil fuels, but it is produced through farming that uses up a lot of resources. Plus the plastic made this way is just the same as conventional plastic: recyclable but not biodegradeable. If it gets into the environment it will still break up into tiny pieces known as microplastics. Though plants offer alternatives to oil-based plastics, they can’t yet provide a solution to our growing pollution crisis.

The kinds of plant-based plastic products Lego plans to produce are a very small step in the right direction. The new flexible tree and bush pieces will be made from polyethylene using ethanol from sugarcane, instead of using chemicals from oil. But only between 1% and 2% of Lego products are made from polyethylene and could be replaced in this way.

Most of the millions of plastic toys Lego makes every hour are moulded from a fossil fuel-based plastic called ABS (acrylonitrile butadiene styrene) that isn’t easily replaced with a plant-based alternative. It takes 2kg of petroleum to make 1kg of ABS plastic, which can be recycled but isn’t collected in most household recycling schemes.

Those Lego pieces that are made with plant-based polyethylene will have a much lower carbon footprint than the conventional plastic because growing plants to make ethanol captures carbon dioxide from the atmosphere. But farming surgarcane can put huge stress on the environment, relying on large plantations that use pesticides, herbicides, and fertilisers as well as significant amounts of water. 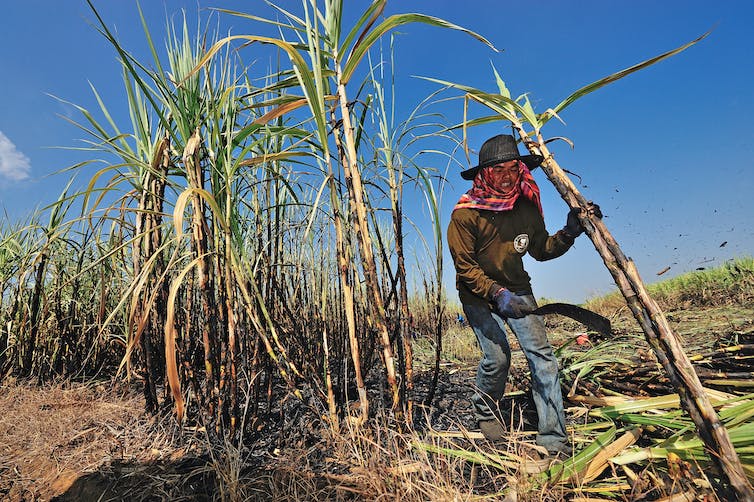 Lego intends to use more sustainable sources of sugarcane and ethanol, which are better for the environment (if not perfect). But it seems unlikely that all manufacturers would follow this model if we wanted to replace all conventional polyethylene with bioplastic. Instead, we might see the growth of large, resource-intensive sugarcane plantations that tend to displace local farmers onto more marginal and vulnerable land, and ethanol refineries with highly exploitative working conditions.

There are far more sustainable sources of ethanol than sugar cane, however. One option is to produce ethanol by farming blue-green algae. We can also generate it from household waste or the residues of coffee production.

Whatever the source of the ethanol, Lego’s customers won’t be able to tell the difference between the old bricks and the new “sustainable” ones because there will be no difference. All plastics are made up of single chemical building blocks known as monomers, linked together into larger chains called polymers (much like a Lego model). In the case of polyethylene, it doesn’t matter what chemical source is used for the monomers, the final plastic is still the same.

As such, the terms “bioplastic” or “plant-based” can be misleading. Materials classified as “bioplastic”, like Lego’s sugarcane polyethylene, are plastics sourced from natural materials but aren’t necessarily biodegradable. And some bioplastics are actually fossil fuel-based.

Lego on the other hand is virtually indestructible, as anyone who has ever stepped on a brick will know. The good news is that this and its continuing popularity mean it’s more likely to be passed on to new owners than be broken down into microplastics, although it still contributes to the pollution problem.

For other companies manufacturing with plastic, this business model is not easily replicated. Truly green plastic needs more than sustainable raw materials and manufacturing techniques. Sustainability must include the product’s whole life-cycle and the social conditions in which those raw materials are produced. Even for Lego, the biggest challenge will be to ensure its fossil fuel-based ABS bricks are recycled or replaced with more readily recyclable materials. Polyethylene trees and bushes are really just tinkering with the shrubbery.